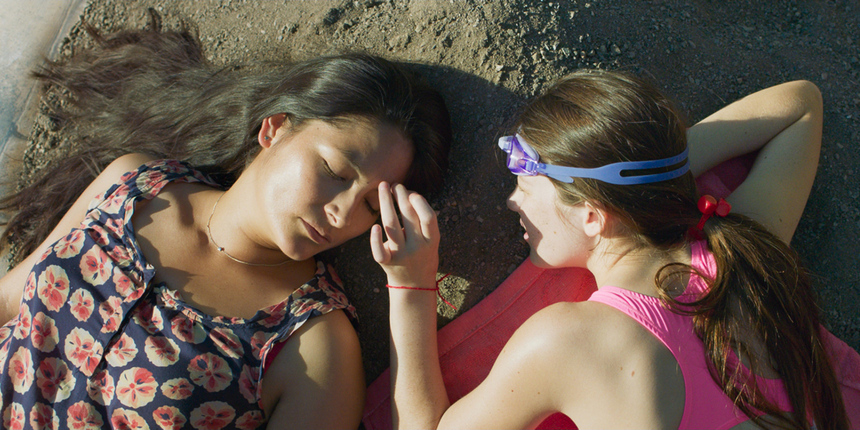 Most of us have probably started humming or whistling a tune while performing an ordinary task; and many of us have likely had moments when we've thought about a song, or started listening to a song, either deliberately or accidently, that evoked what we were thinking or feeling at the moment. And some of us still likely have imagined, or maybe actually, burst into a song or thought we were in a musical number in order to process our thoughts and emotions.

María Paz González's first fiction feature tells the story of a seemingly ordinary woman, and how her mind turns to old-style musical numbers to understand what she's going through. Lina from Lima is an understanded yet effective film, filled with deceptively complex emotions and showcasing the trials of a woman who struggles more than she can express when she's left to carry her burdens alone.

Lina (Magaly Solier) is a Peruvian working for a wealthy family in Chile, as a housekeeper and child minder. She supervises the construction of a pool in their new home, looks after their daughter Clara (Emilia Ossandon), lives in a small but reasonable boarding house, and is trying to makes plans for her annual return home for the Christmas holidays. But her teenage son is ignoring her calls, her ex-husband has started a new family, and money is getting tight.

Lina tries to keep a stoic and calm demeaner in front of people, but small details, both internal and external, show the cracks forming. One of the hardest burdens of the migrant worker is loneliness; despite some friends and her close relationship with Clara, there is a certain companionship she seeks. It's rare and refreshing to see a woman in film enjoying casual sex, and certainly Lina does, without pressure on herself or anyone else, though these encounters still make her loneliness more palpatable. She buys simple but thoughtful gifts for her family, but her son is only concerned about getting an 'official' football shirt. Again, the burden of the migrant worker: Lina might have better work in Chile, but she's still paid less than her worth, so she gives herself some respite by staying at the as-yet unoccupied home of her employers.

Such a story might easily have lapsed into a bit of a clichéd festival film, were it not for the inclusion of musical numbers. Paz Gonzalez and her team rightly present these as they would appear in Lina's head: they are glamourness with a touch of kitsch, sentimental without being too sugary, and often quite sexy. Some are inspired by choral music, some by Busby Berkeley-style movie musicals, others by South American rock music videos. Some are reflective ballads, others are happy daydreaming, others are sexy fantasies. Some come as Lina is thinking, while others are strange dreams. The variety speaks to how Lina has conflicting emotions that express themselves in different ways, and how she struggles to find ways to cope with her loneliness and distance from her family.

Solier is wonderful as Lina; she never wants or requests our pity, merely our understanding. She lest us see the layers gathered to look behind the mask Lina must wear for those she works for and those she encounters. In the last act, she forms a bond with another migrant worker, from an unnamed African country. They don't even speak the same language - but maybe because of that, Lina is able to let down her guard as she resolutely fixes the messes she has made.

Full of delight with hints of sadness, Lina from Lima gives us the life of a migrant worker through a different lens, never belittling the hardships of that life, while striving to portray its main character as the complicated human that she is.

Do you feel this content is inappropriate or infringes upon your rights? Click here to report it, or see our DMCA policy.
María Paz GonzálezEmilia OssandonJaviera ContadorMagaly SolierDrama