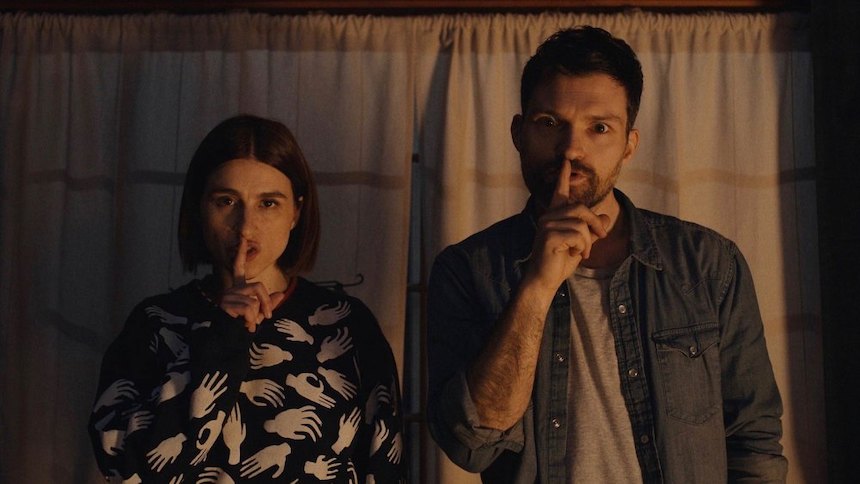 Horror goes meta – sometimes too meta, sometimes not enough meta (depending on your preferences and overall patience) – in Scare Me, writer-director-actor Josh Ruben’s feature-film debut.

Starting with one of the simplest of horror premises – an isolated cabin in the woods, strangers with clashing, conflicting agendas and personalities, and an hours-long power outage in the middle of a dark and stormy night – Ruben not-so-subtly explores the hard-wired connections between our instinctual, primordial desire for fright-associated frisson (albeit under controlled circumstances), storytelling (the stories we tell ourselves and the stories we tell each other), and the corrosive, destructive, pernicious gender norms typical of 21st-century, Western (read: North American) culture. Hampered by an overlong, self-indulgent running time that could have benefitted from judicious scene trimming, Scare Me still manages to deliver enough turns, twists, and switchbacks to satisfy the average meta-horror fan.

Ruben’s character, Fred, lives and breathes (screen) writing or directing (or acting) or so he likes to tell anyone within earshot, including Bettina (Rebecca Drysdale), his Uber driver, as she shuttles him to a remote cabin in the woods for a one-man weekend retreat, and Fanny (Aya Cash), another writer staying at a near cabin. Except that he’s really not a writer or a director; he’s a wannabe writer and director.

A walking, talking screenwriting cliche, Fred believes a weekend at an isolated cabin will release his muse from creative captivity followed by a fully formed, near-perfect screenplay two or three days later. Fred ascribes to a dated, old-school Romantic notion of writing and creativity. What he lacks (i.e., talent) can’t be found in a screenwriting manual, a three-day seminar in a hotel ballroom listening to a failed screenwriter, or an expensive weekend retreat at an isolated cabin in the Catskills.

Fred inadvertently crosses paths with his shadow-double, Fanny (Aya Cash), on a morning jog. She represents everything Fred isn’t: A commercially successful, critically acclaimed horror novelist. Fred’s fumbling attempts to ingratiate himself to Fanny fail badly, but he gets another chance when a local power outage forces them to spend the night together (platonically).

Goading him all the way, Fanny convinces Fred to participate in a storytelling game, “Scare me.” Telling each other horror stories almost immediately turns into a competition, a competition the creatively challenged Fred isn’t mentally, emotionally, or intellectually equipped to meet. Ruben the screenwriter-director gives Fred the most basic, derivative werewolf story to tell Fanny. When she steps up with a story of her own involving a creepy, possessive grandfather, it becomes clear he’s utterly outmatched by the real writer in the room.

As his bitterness and resentment grow, it becomes increasingly obvious that Ruben’s interested, at least in part, in using Fred as a surrogate or stand-in for white male privilege and its usual corollary, toxic masculinity and its discontents. Fanny doesn’t just represent everything Fred wants professionally for himself, but everything he feels he’s deserved. Her gender status only exacerbates Fred’s overweening sense of entitlement.

Over multiple stories, including an overlong comic interlude with a pizza delivery dude and Fanny’s No. 1 fan, Carlo (SNL’s Chris Redd), where Fred’s already fragile, fractured ego takes multiple blows, leading to a predictably twisty finale that almost makes Ruben’s predilection for narrative entropy worth the wait. Even when it feels like a too little/too late combo typical of first-time filmmakers, Scare Me still manages to deliver on its promise (thrills, chills, and maybe even a kill).

Ruben uses the limited setting to frequently positive effect, bringing both Fanny and Fred’s stories to auditory and sometimes visual life. Points off, though, for inconsistency, especially once Carlo shows up and their shared storytelling experience turns into a psychedelic, supernatural tinged musical.

For all of his self- and over-indulgence, Ruben handles the visual side of storytelling with a sure, assured hand, making the end result literally more watchable than expected for a first-time, directorial effort. Ruben and Cash prove themselves impressively skilled performers of the pantomime kind, elevating deliberately banal, derivative stories into surface-deep entertainment (far more an accomplishment than it sounds).

Do you feel this content is inappropriate or infringes upon your rights? Click here to report it, or see our DMCA policy.
Aya CashJosh RubenSundance 2020Sundance Film Festival