Review: THE DAYTRIPPERS Steers Into the Criterion Collection 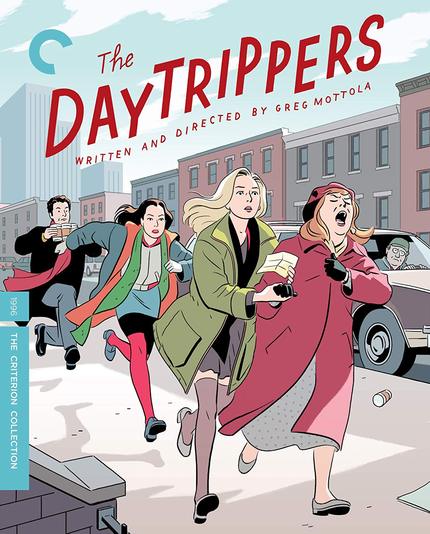 When Criterion announced that Greg Mottola’s humble debut of the mid-1990s, The Daytrippers was to become part of the venerable collection, the response from the film world was a nearly unanimous one of, “Huh...!  Okay...”.

A Criterion title devoid of speculation, pre-announcement anticipation, or even any kind of visible fanbase, this film, not unlike the determined group of relatives plus one which it chronicles, just kind of pulls up outside, spills forth, and gets noisy.  No one may’ve expected this, but as it turns out, The Daytrippers should not be an altogether unwelcome title.

As the opening titles play out, we begin to see that there might be more to this title choice than “from the guy who brought us Superbad. Producer Steven Soderbergh and co-star Parker Posey are a few pre-existing Criterion connections. Posey, by 1997 when The Daytrippers unceremoniously came and went on movie screens, was already the indie-film goddess of the moment.

By that stature alone, one might assume Posey already has her own wing in the Criterion Collection.  She actually doesn’t (but if this film has made the cut, let’s just give her time- the gifted actress is a brilliant spark in the overtly earnest ‘90s), but Soderbergh certainly does.  (A quick count tallies seven Criterion Soderbergh-directed titles to date).  Indeed, he is on hand along with editor Anne McCabe, and director Motolla on the disc’s newly recorded audio commentary track.

The film just might be the Apocalypse Now of mid-1990’s ennui.  A group soldiers out, straight up the river of NYC traffic through the concrete jungle on their singular mission to find Stanley Tucci, with extreme prejudice.  Tucci’s character, Louis, is the milquetoast husband of Eliza (Hope Davis), who’s found an unsigned, unaddressed love note near his nightstand.

he next day, she reluctantly seeks the council of her aging parents.  Her busy-body mother, Rita, (Anne Meara) and curmudgeonly father, Jim (Pat McNamara) take a break from being loud in the kitchen to hear out this issue.  Rita, unable to resist the sauciness of it all, grins and makes the situation into a manhunt.  Confronting Louis in person with the note is how she insists it be done.  Eliza concedes.

Soon enough, they, along with Eliza’s younger sister, the sardonically punchy Jo (Parker Posey) and her intellectual author boyfriend, Carl (Liev Schreiber), pile into the old wood-paneled station wagon for a trip into the city.  The anxiety in the car is certifiably low-level, though always entirely present.  Like Apocalypse Now, the central mission almost becomes an afterthought at times, as side journeys and distractions (both altruistic and necessary) overtake the story. 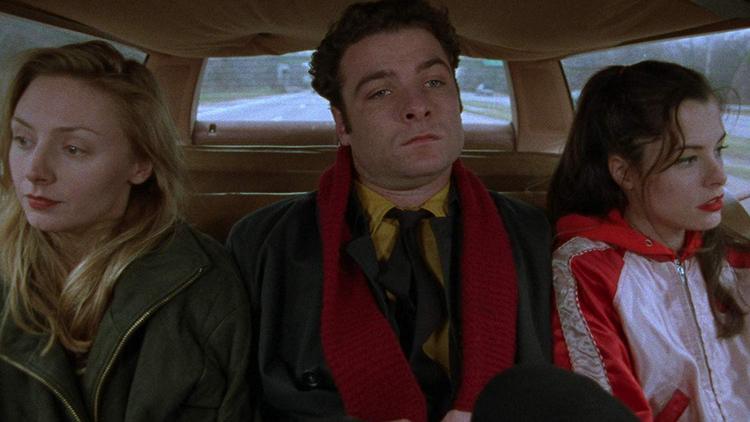 Hope Davis, obstensiby the lead character, plays Eliza so internally, so introverted, that it’s easy to let her slip into the background. She is however ultimately far to compelling and even far too attractive for that. Her short skirt and thigh high leggings effectively betray a certain assumed conservatism of Eliza’s schoolteacher-ly trade.  Her face, both by contrast and in keeping, is a rich cauldron of quiet suppression and fragile uncertainty.

Eliza is stuck in the backseat next to Carl and Jo.  Though youthful twenty somethings, their dynamic is like an old married couple onto itself.  Carl, part of that oh so trendy it’ll actual Coffeehouse scene of the moment, it’s just full of ideas about why a capitalist democracy is non-ideal, it has written a novel full of chips symbolism that he mistakes for profundity.

Carl detailing the weird ins and outs of his novel to the doting-but-oblivious Rita becomes a kind of running gag.  And, there’s a payoff to it and put a nice button on the movie proper.  Jo, meanwhile, is a manic conflicted mixture of being both turned on by Carl and repulsed by him. When temptation comes along in the form of hot-stuff literary dude Campbell Scott, the story finds yet another compelling detour.  The father, Jim, tasked with driving the car, is the quiet tolerater of all this.  He quietly harrumphs his way through the whole of it all.

Criterion’s Blu-ray edition of The Daytrippers sports an appropriately washed-out transfer, indicative of the film’s wintry vibe and color palette. Regarding the bonus features, this is one of the company’s more impressive efforts of late, insomuch as everything contained here had to be specially generated for this release. Apparently, there were no vintage interviews or behind-the-scenes documentaries laying around that could be tossed onto the “supplements” submenu.

What we do get is quite satisfying, and for this film, plenty. Greg Mottola, obviously deeply involved with this release, hosts two separate video interviews, both recorded in June 2019.  The first is a forty-minute affair with both Posey and Schreiber, both of whom brought their small dogs, which proceed to run around throughout.

Around the thirty-minute point, Mottola makes a speaker call to Campbell Scott, who then gets a chance to catch up with everybody and share his memories of the film. It’s a fun piece, particularly when Posey has both dogs climbing on her.

The other interview is a solo one with Davis, which runs about half the length of the other.  On it, Davis describes how as a beginner, she was so uncertain in the making of the movie. It shows that her performance, though thankfully it is not detrimental.  One might even say it’s beneficial.

Throughout all these extras, the reoccurring three lines I’ve just starting out is continuous. Mottola clearly has young filmmakers in mind in his execution of all of this, including the presence of his first film, a four-minute-long silent student project which he describes as a glorified camera test.  Thematically, there’s no reason for this film, 1985’s The Hat Box, to be on the disc, other than it’s another early film by the director, offering him yet more opportunity to speak about “just starting out.”

The printed essay insert unfolds into six panels, making for a nice miniature table runner.  The essay itself is by award winning television critic Emily Nussbaum.  Finally, one would be remiss to overlook the stylish nineties indie-comic illustrations on the cover and throughout, by R. Kikuo Johnson.  The clean, fine artwork honestly goes a long way in heightening this disc’s physical appeal, as well as communicating the feel of the movie itself.

The Daytrippers might not be the obvious or preeminent example of the 1990s independent dialogue-driven comedy drama, but it is an aptly competent and bemusing one.   Though not that old (I was graduating from college with this film came out), The film plays like a kind of fresh fossil; the last remnant of the better end of the Central Perk era, that entire culture gone by.