Now Streaming: TOGO, Of Dafoe and a Dog

Willem Dafoe and Julianne Nicholson star in the dramatic adventure, based on a true story. Ericson Core directed. 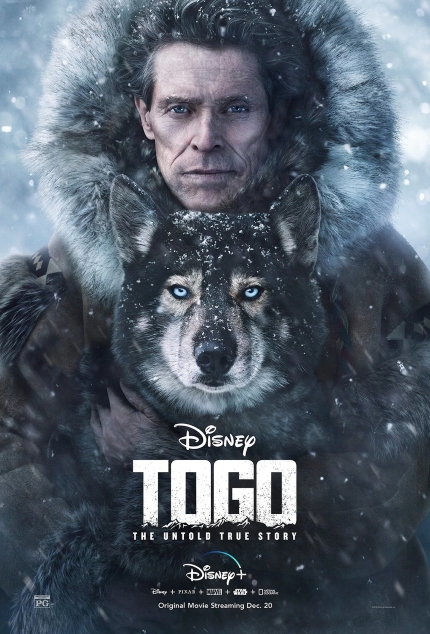 Now that The Mandalorian has concluded its initial, generally satisfying 10-episode run, the streaming service leans into dogs.

In search of viewing options, as an alternative to the latest Golden Globes awards show on Sunday night, I briefly sampled the new, live-action Lady and the Tramp, before fleeing in terror -- clearly, I am not amongst the target audience -- and then settled on the new, live-action Togo, primarily because of its star, Willem Dafoe, and good word-of mouth on social media. (Thanks, Anderson Le, and friends!)

Nature threatens the promise of full bellies and warm beds in the opening moments. Leonhard Seppala (Willem Dafoe) is a hardened musher with a soft spot for his aging dog, Togo, who faithfully leads his primary team of sled dogs. Sep, as he's known, has barely settled into bed with his loyal and supportive wife Constance (Julianne Nicholson) after a brutally cold run when the male leadership of Nome, Alaska, supplicates him to undertake a 600-mile round-trip journey to bring back serum that is desperately, and immediately, needed to treat a sudden outbreak of deadly diphtheria.

Sep and Constance do not have children, and so the faithful Togo fills that role, even more so for the stubborn, taciturn Sep than for Constance. Still, they know all the children who have been stricken, and they know their parents and family members. Sep's decision has already been made for him.

From there, writer Tom Flynn and director Ericson Core, who also serves as director of photography, follow Sep, Togo and the dogs on a trip that is fraught with danger. The freezing-cold, stormy weather worsens with each passing minute, and prospects for survival likewise dim. The previously indefatigable Togo is also showing his age; after 12 years, the conclusion of his lifetime is rapidly approaching.

And how has he spent his years? We learn more about Sep, Constance, and Togo through flashback sequences that document their changing relationships, and how Togo eventually became lead sled dog for Sep.

The film is stylish to behold; director Core is well-experienced as a cinematographer, with Payback (1999) and The Fast and the Furious (2001) among his early credits. He also served as d/p on his previous feature, the Point Break (2015) remake, which I haven't seen. He has a steely eye on coordinating the alternating primary colors that dominate the sledding scenes, in contrast with those set in and around Sep and Constance's home and dog-breeding/training property in Nome, which helps make Togo a pleasure to watch.

As good as Julianne Nicholson proves to be, in an underplayed performance as a spirited wife who expresses her strong feelings without calling attention to them, it is Willem Dafoe whose presence dominates every moment of the movie. From his sexy, snarling, electrifying debut in Kathryn Biegelow's The Loveless (1981) throughout a series of roles that have cemented his ability to breathe vibrant life into every character he plays, he always brings a fresh perspective.

His performance as Sep is strikingly different and hits far more warm, resonant keys than the dark hues he brought to his oft-menacing character in Robert Eggers' The Lighthouse (2019). He's a sympathetic person who is in love with his dear wife and a loyal dog, and that helps to make Togo what it is.

Do you feel this content is inappropriate or infringes upon your rights? Click here to report it, or see our DMCA policy.
Disney PlusEricson CoreJulianne NicholsonTogoWillem Dafoe