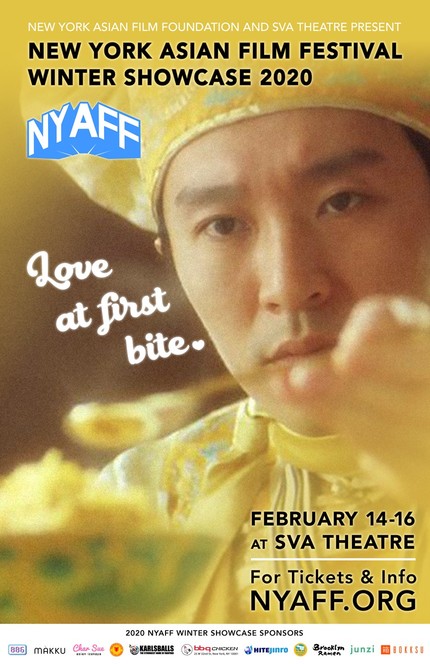 For 18 years now, the New York Asian Film Festival has been an indelible fixture on the summer film calendar, bringing to audiences the endlessly varied pleasures and provocations to be found in contemporary Asian cinemas.

To tide fans over between editions, last year the festival instituted its Winter Showcase, a themed set of programming with both classic and contemporary cinema. Last year’s theme was “Crazy Broke Asians,” referencing the previous year’s hit Crazy Rich Asians, but featuring stories of the not so well off. The selection also included classic martial arts films.

The second Winter Showcase, screening February 14-16 at SVA Theatre, has as its theme “Love at First Bite.” This year’s selection of seven films explores the importance of food in many Asian films, and the programming pairs the films with corresponding food tastings, featuring cuisine from local restaurants, inspired by each film.

The series kicks off on Valentine’s Day with Lee Byeong-hun's Extreme Job (currently the second highest grossing film in South Korean history), paired with a post-screening tasting of chimaek, the Korean term for the combo of fried chicken and beer.

The final day of screenings feature more recent films: Ritesh Batra's critically acclaimed The Lunchbox; Chen Yu-hsun's 2014 NYAFF audience award winner Zone Pro Site: The Moveable Feast; and closing with a recent Japanese film, The First Supper. All these will be paired with post-screening foods inspired by the films.

This all promises to be a fine way to spend the Valentine’s Day weekend. Full details of the 2020 NYAFF Winter Showcase are below. Click here for more info and to purchase tickets.

The New York Asian Film Festival ushers in the new decade with the second annual edition of its Winter Showcase. Held at Chelsea's SVA Theatre over Valentine's weekend, this year’s showcase celebrates our love of Asian films by turning the spotlight on food cultures through cinema. At a juncture when America still obsesses over Bong Joon-ho’s award winning Parasite, and some of its more minute plot points such as the wonders of Ram-Don (jjapaguri), it is timely to show that when it comes to putting food front and center, Asian movies do it best.

To celebrate a time-honored tradition of storytelling and the romantic holiday, this year's lineup brings together trends-and-time-transcending classics as well as some remarkable foodie films of recent years, spanning several decades and different strands of filmmaking: regardless of where and when they are from, these stories pack in full plates of heart and soul, feasts for the eyes, and more than a few surprises demanding to be seen on the big screen.

And what food film festival would be complete without some opportunity for the audience to add actual gastronomy to the visual delights by chowing down after the screenings? In addition to the seven mouthwatering films, each day will close with a selection of delicious treats from across the continent represented by a plethora of great New York Asian restaurants.

“With the second Winter Showcase, we decided to continue to explore repertory programming in the most fun way possible - with a lineup that connects food and film, and shows that they transcend borders. It’s a great occasion to relish different Asian food cultures, and the food itself! But for the more attentive viewers, it’s also an occasion to discover why cooking and eating are so central to so many Asian films. How they address themes of family, morality, mortality, ambition and finding one’s way through the crossed wires of building romantic connections.”

“Having seen more than our fair share of Asian cinema, we’ve long observed it’s salient obsession with food and eating and how that underlines themes of humanity in multiple ways - from tragic to comic. So we knew an Asian food film event was a perfect idea!”

Friday night kicks off with Korea's massive hit Extreme Job (second highest grossing movie of all time in South Korea!), about a crew of undercover cops whose front as a fried chicken place turns into a surprise success. We pair up the blockbuster film with a big night of our version of 'chimaek' - Korea's beloved combo of Korean style fried chicken and beer. For our festival, our wonderful friends at Koreatown’s popular BBQ Chicken Ktown will debut their brand new “Galbi” fried chicken to coincide with the film’s smash hit “Suwon Galbi” flavor. Expanding the experience, we add a range of tasty delectables like New York mainstays The Halal Guys and Chapati Man. Throw in some chilled Hite beer, Jinro soju and try out the brand new makgeolli brewers Makku and you’ve got the perfect opening night for fans of NYAFF.

Saturday gets cooking with what is possibly the ultimate foodie film, Itami Juzo's groundbreaking and delectable masterpiece, Tampopo. Combining ingenious vignettes that conjure pure cinema from Chaplin to Preston Sturges with a delicious genre pastiche, this classic was proclaimed as the first 'ramen western' and is a glorious celebration of life through food that transcends all borders. After enjoying the film, stay on for “Tampopo” tonkotsu ramen by Brooklyn Ramen that will surely satisfy whatever urges are brought up from watching this essential piece of cinema!

Before he became an aficionado of frame rates and ultra realistic filmmaking, Ang Lee worked on telling personal tales about East vs West culture clashes within traditional Chinese families. Eat Drink Man Woman was the final film in Ang Lee's 'father knows best' trilogy, and the first shot in his native Taiwan. This bittersweet, tender multi-generational coming of age tale about a top chef father trying to reconnect with his daughters through sumptuous culinary creations established Lee as a true auteur with a film that’s as exquisitely constructed as the succulent dishes it displays. What better way to enjoy the taste of Taiwan than with one of NY Magazine’s Best of 2019 restaurants, 886 serving up Taiwanese casual food with a hint of Manhattan flair.

Saturday night concludes with the arch classic, ultra-wacky Hong Kong opus by King of Comedy Stephen Chow (Shaolin Soccer, Kung Fu Hustle) - The God of Cookery. Chow feeds the screwball comedy paradigm his patented formula of hyper-slapstick and irreverence, making this one of the funniest films to ever come out of Asia. Chow stars as a fallen sham chef, who rises from the ashes of his own folly like a 'dragon and phoenix' to create dishes such as "Pissing Beef Balls" and “Sorrowful Rice”. Inspired by the food onscreen Asian fusion specialists Char Sue offer up a delicious special version of their “Char Siu Rice” (Roast Pork Rice) giving you a guaranteed mind-blowing gastronomic good time not to be missed!

Our Sunday late brunch starts with the Indian box-office phenomenon The Lunchbox. One of the best reviewed films to come from South Asia, this critical darling tells the tale of how a food delivery mixup surprisingly kick starts a surreptitious friendship between a lonely housewife (Nimrat Kaur) and an aging office worker (Irrfan Khan). Writing wistful comforting notes to each other over unassumingly fabulous midday meals, eggplant and chili peppers never looked so enticing as in Ratesh Batra’s romantic debut film. After the screening, we pair the flavors of the country with the cult UK Spicy Indian Wraps of Chapati Man, making sure to satisfy your savory needs!

Back by popular demand, Sunday continues with the NYAFF 2014 audience award winner, Zone Pro Site: The Movable Feast. This wild and colorful farce about a woman who desperately joins a cooking competition, is born from Taiwanese street food and blooms into a neverending banquet of culinary extravagance and zany antics. Leaving you hungry for more, the 886 gang return with food inspired by the film just for you!

The NYAFF Winter Showcase 2020 concludes with First Supper, an appetizing new Japanese film that truly is comfort food for the soul. In this Ozu-flavored slice of ‘mono no aware’ (the pathos of things) a family convenes for their patriarch’s funeral. As they remember him through the food he cooked from various shared meals, stormy past secrets and repressed emotions come to the surface. Japanese home cooking, from rice omelets to miso soup and fried mackerel have never looked so lovingly elegiac and glorious. Bringing a taste of home cooking is the wildly popular Japanese takoyaki bites of Karl’s Balls. Since it’s our final screening, we’ve invited back our various wonderful vendors and food sponsors to share their dishes and prizes to our loyal and hopefully hungry audience.

Do you feel this content is inappropriate or infringes upon your rights? Click here to report it, or see our DMCA policy.
New York Asian Film FestivalNYAFF Winter Showcase 2020