Blu-ray Review: BODY PARTS Will Have You in Pieces 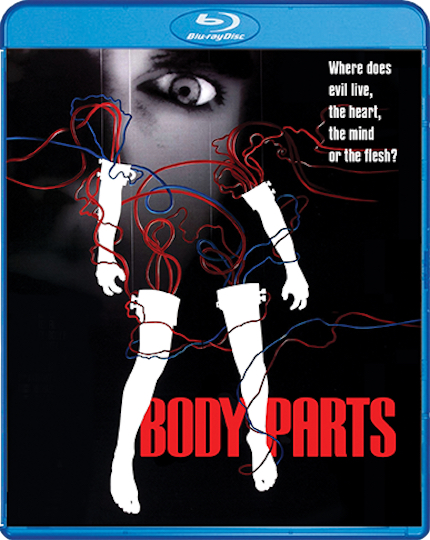 The early 1990s was still the 1980s, really. Not just in terms of music, but clothes and films, too. Bombastic touches in special effects as well as in storytelling often went along with pleated pants, stonewashed jeans, shoulder pads, and other questionable wardrobe items.

The point is, if you like crazy '80s films, there were plenty to be found in the early '90s, such as the Eric Red (Bad Moon) film, Body Parts. Starring Jeff Fahey (, Planet Terror, Lost, Wyatt Earp), Body Parts is the story of Bill, an even-keeled criminal psychologist who badly wants to "just heal someone."

Not long after speaking to an off-kilter criminal on death row, Bill is involved in a horrific accident on the freeway in which he loses his right arm. The horror!

The bright side of this is that an icy surgeon is able to replace Bill's arm with a donor's. It's a long road, physical therapy, but the arm works well. However, it acts on its own, rather violently at time.

Kim Delaney (All My Children, NYPD Blue, CSI: Miami) plays Bill's wife Karen, who has to put up with a LOT after Bill's accident. He's hit one of the kids and has even attempted to strangle her while they were asleep, so it's off to a local motel for this bad dad.

As it turns out, there are two other men who also had transplants from the same donor. In an attempt to understand what's happening to him, Bill tracks down athlete Mark, played by Peter Murnik (Mindhunter, Armageddon), as well as the painter Remo, played by the inimitable Brad Dourif (One Flew Over the Cuckoo's Nest, Child's Play, Dune).

Mark's gotten two whole legs, which helps him play basketball, and Remo has the matching arm to Bill's, which he uses to now make a ridiculous amount of money creating dark art.

I won't spoil the rest of Body Parts, but you can bet on some crazy stuff that will have you grinning. This is one of those fun, entertaining films that just may have you laughing out loud at its audacity. I know I enjoyed it.

Overall, the picture looked great, and no sound complaints, either. So let's move on to the...

One of the cool deleted scenes shows Bill face down on the freeway, coming up after being thrown from his car --- just in time to see a Mac truck running over his severed arm! The director made a point of the test screenings and how well that scene played. And it was cool to hear that spherical lenses were used to create distorted POV shots in the hospital.

Anyway, if you like what you've read, you'll like this film. To read more, check out a trailer and order Body Parts, head on over to Scream Factory's page for the film here.