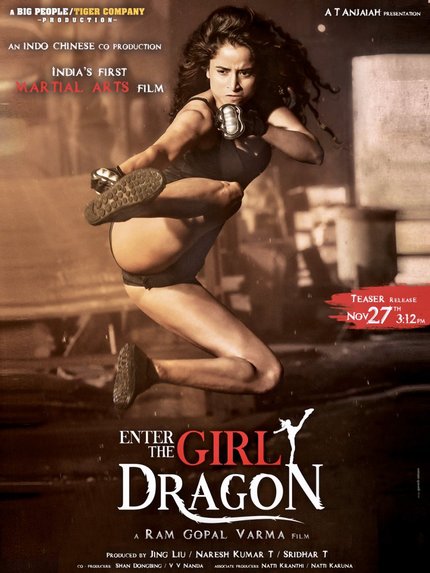 Deceptively - and dishonestly - advertised as "India's First Martial Arts Film", Enter the Girl Dragon is RGV's entry into the world of high-kicking action, and the action looks pretty decent. Leading the film is newcomer Pooja Bhalekar, not much is known about her, but the action seems to speak for itself. The trailer is chock full of high kicks and slo-mo fights that I want to see more of, which is a good sign. There's no telling where the film goes once the punching stops, but I am hopeful.

RGV has been in a bit of a slump over the last decade. While his productivity hasn't slowed in the least, he's directed somewhere in the neighborhood of thirty features in the 2010s, critical and/or box office successes have been few and far between. This may or may not reverse that trend, but the imagery in the trailer is at least enough to get people talking about him again, and hopefully he delivers.

The trailer was launched today in Foshan, China, the ancestral home of martial arts, in a ceremony full of pomp and circumstance. As far as I can tell, no concrete release date has been set, but the Indo-Chinese co-production could get a wider release that many of RGV's recent films haven't had.

Check out the trailer below and let us know what you think.