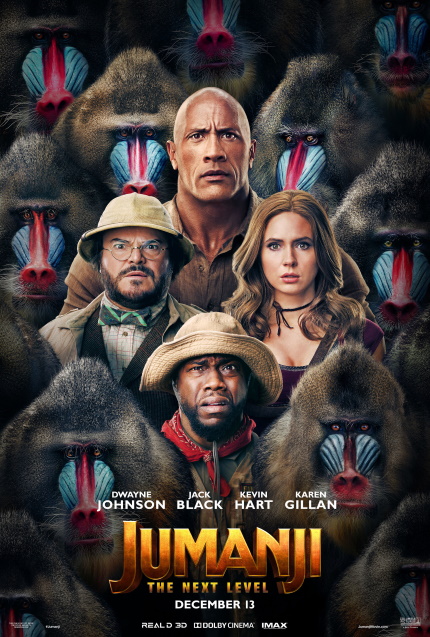 Okay, you got me. I'm an easy mark for the crowd-pleasing antics of Dwayne "The Rock" Johnson.

While the Jumanji franchise is very clearly an ensemble driven enterprise, it's Johnson who looms largest on screen, both figuratively and literally. It's somewhat rare that a film manages to put up any kind of satisfying foil to the big man's overwhelming charisma, but Jake Kasdan's Jumanji series seems to have found the perfect formula. Joined by returning leads Kevin Hart, Jack Black, and Karen Gillan, The entire cast of Jumanji: The Next Level delivers a wildly entertaining expansion on the promise of the first film's wildly successful cocktail of adventure and humor, adding a few new and welcome ingredients to the mix, making this a sequel worthy of the name.

In the first film, a Breakfast Club-style crew of mismatched misfits end up playing the titular video game for real when they accidentally activate the mystical motors of imagination. Through their adventures, these unnatural allies become fast friends who manage to solve the game and emerge from its crazy digital purgatory victorious. Jumanji: The Next Level catches up with our heroes three years later, out of high school, moving on to new real world adventures thousands of miles apart, but bonded in a way that is seemingly unbreakable, except not all is as merry as it first seems.

When one of the friends, Spencer (Alex Wolff), finds himself despondent about the reality of his not-so-magical real life, he decides to jump back into the game, prompting the rest of his crew to jump back in to save him. However, the unexpected addition of Spencer's grandfather Eddie (Danny DeVito) and Eddie's former business partner Milo (Danny Glover) to the mix provides for a new twist and endless comedic possibilities on the way to inevitable salvation for all involved.

When the three remaining musketeers attempt to jump back into Jumanji to save Spencer, one gets left behind and the two vacant spots are filled by Milo & Eddie, a pair of elderly curmudgeons who are woefully unaware of the way video games work. While their ineptitude provides a base layer of comedic possibility, it is our digital heroes, Smolder Bravestone (Johnson), Mouse Finbar (Kevin Hart), Ruby Roundhouse (Gillan), and Shelly Oberon (Black) who have to truly deliver the goods when it comes to bringing those punchlines home.

Yes, there is a new story in Jumanji in which our heroes have leveled up to a new strata of the titular game and face new and tougher challenges based on the usurping of yet another magical gemstone by a nefarious villain. However, this is merely a MacGuffin that sets a series of truly hilarious performances loose on screen when a series of miscommunications, body swaps, and wild adventures take over.

The additions of DeVito and Glover, two infinitely imitable personalities, to the cast was a stroke of genius for a film whose predecessor succeeded largely on the successful performances of Johnson and Black as characters so wildly against type that they really had to act their asses off the make it work. With the addition of these two new personalities to play with, Jumanji: The Next Level expands on its own premise in a way that is never not entertaining, as well as adding new Hollywood darling Awkwafina as cat burglar Ming, and bringing back Nick Jonas as Alex.

While the adventures and action are always larger than life, it's the performances that really endear Jumanji: The Next Level to the audience. Johnson, Hart, and Black in particular are tasked with truly earning their paychecks as each cycles through several distinct personalities on screen, and all three do a wonderful job of bringing their A-game, delivering gut-busting performances that will elicit laughs from even the mot cynical filmgoers, and I should know, because they don't come more more dour than me.

The plot may be largely a rehash of the first film, and the film's gags often rely a bit too heavily on having seen the first installment, but nonetheless, Jumanji: The Next Level is one hell of a fun ride in which every member of this ensemble puts in the work to keep its audience laughing. I had a great time, and anyone with half a funny bone in their body is bound to crack a smile more than once.

Jumanji: The Next Level