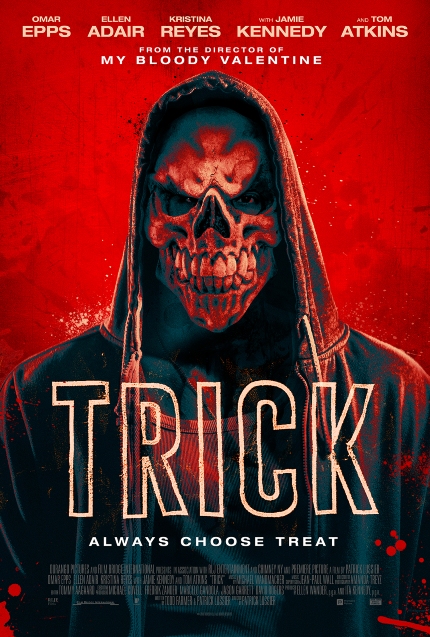 Of all the horror movies in all the world, you decided on this one, ya sicko.

Trick
The film is available as of today (Tuesday, December 17, 2019) on Blu-ray and DVD, via RLJE Films.

Horror fans know one when they see one.

In other words, those of us who have been watching horror films for years usually can easily differentiate between wanna-be and never-say-die filmmakers; the former group imagines that making a horror film is the cheapeast and easiest entry into the business, while the latter group is primarily motivated by what they can see and do in horror movies (although making a profit and at least a decent living would be awesome).

The die-hard group will continue to make horror films because they themselves love horror films and want to push boundaries, not only as far as content is concerned, but more importantly, they want to destroy preconceived ideas about what constitutes horror in a film, and how it can cast a penetrating light upon people and society at large.

Within the first five minutes of Trick, writer Todd Farmer and co-writer and director Patrict Lussier make it clear where they interests lie.

Farmer established himself with Jason X and built upon that with My Bloody Valentine (the 2009 remake). He collaborated on the latter film with director Lussier, known for his years as a film editor before he moved into the director's chair back in 2000.

Together, the filmmakers have sown together a brutal, absolutely savage film that feels like an extreme splatter version of a modern slasher. They do have a larger purpose in mind, well beyond the endless slaughter of innocents and police alike, as well as the continual suggestion that something supernatural is afoot.

Police Detective Mike Denver (Omar Epps, who appeared in Lussier's Dracula 2000) comes to believe that a serial killer known as Trick is, in fact, a supernatural entity of some sort, to the complete disbelief of nearly everybody he encounters. Still, Denver presses on; he teams with Sheriff Lisa Jayne (Ellen Adair) for a time, even though she believes he is out of his mind. It's a mark of the film's authenticity that she sticks with him and relies upon his expertise, despite her complete disavowal of his beliefs. They respect each other, and that is demonstrated time and time.

An early victim (and, obviously, rare survivor) of serial killer Trick, Cheryl Winston (Kristina Reyes) could almost be mistaken for a Final Girl, except that she wants absolutely nothing to do with the crimes that have been committed. She is recognizably human, however, and becomes a good surrogate for the audience, in that. while she is primarily interested in preserving her own life, she is not able to walk away from extreme dangers posed to others.

Between this trio of sympathetic protagonists, Trick also benefits from a strong supporting cast, notably Jamie Kennedy (from Scream) and Tom Atkins (from Halloween: Season of the Witch, so that gets a sly reference as well).

Now, not everything works; the continued onslaught of explicitly violent imagery wore me down fairly quickly, so that aspect of the film had little to no effect upon me, beyond general nausea. Even so, I understand why Lussier decided to go that route, and the film as a whole is very well put-together and fairly well flies by.

Shocker: it's also somewhat meaningful, which at first seems like some sort of trick, but is a treat, as long as you're in a somewhat demended state of mind.

Summing up: Got blood in abundance, and a social message too. Mostly blood, though, along with a quick, solid pace to the narrative, with effective performances to boot.

Originally published in a slightly different format when the film was released in theaters, On Demand and Digital HD in October 2019. The Blu-ray and DVD editions include a special feature, "The Making of Trick," featuring interviews with the cast and crew.

Do you feel this content is inappropriate or infringes upon your rights? Click here to report it, or see our DMCA policy.
Ellen AdairJamie KennedyKristina ReyesOmar EppsPatrick LussierTodd FarmerTom Atkins