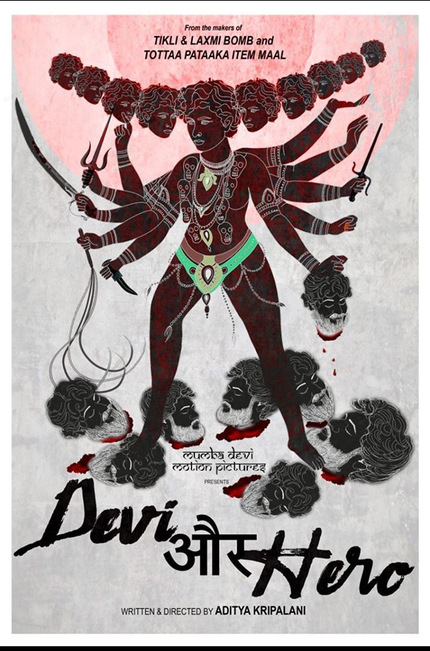 Up and coming Indian filmmaker Aditya Kripalani has carved out an interesting niche for himself in his short but prolific career behind the camera. At first a novelist, in 2017 he turned to filmmaking by adapting his own novel, Tikli and Laxmi Bomb for the big screen. Last year he wrote and directed his second feature, The Incessant Fear of Rape, which made the festival rounds and is currently available to view on Netflix, along with Tikli. Both films take a hard stance against the firmly entrenched misogyny in the lives of everyday Indian women and approach the subject bluntly, and frequently with controversial consequences.

Now back with his third film, Devi Aur Hero (The Goddess and the Hero), Kripalani continues exploring his favorite themes in a new setting, and with a male co-lead, something his previous films did not find any need for. Vikrant Saraswant is Vinay, a psychologist with issues of his own. He is dealing with a sex addiction that has proved extremely destructive in his own life and threatens to derail his practice as well. Much to his own consternation he discovers that his newest client, Kaali (Chitrangada Chakraborty), is a victim of sexual violence seeking to rebuild her life after having been a sex slave for the sadistic son of an aristocrat.

Not only is she extremely withdrawn and fearful because of her experiences, unfortunately she is also very attractive, which proves triggering for Vinay, who frequently doubts his own ability to separate his work from his addiction. Kaali, on the other hand, find her new doctor to be just what she needs to move forward, and in the process of moving through her therapeutic journey she becomes increasingly attached in a platonic way, presenting challenges for both parties.

So far, nothing earth shattering in the basic story of Devi Aur Hero, but soon it is revealed that Kaali's traumas have so shattered her psyche that she has developed dissociative identity disorder (multiple personalities) in order to protect her. She frequently blacks out and wakes up in places she doesn't remember having been, at first her personalities don't interact, but as she moves through her recovery, they begin to intrude upon her waking life with increased regularity, acting as devil and angel on her shoulders in challenging situations. The battle between the personalities and Vinay's attempt to stay the course and help this woman who has entrusted her mental health to him forms the crux of the story from there on out.

Kripalani's cinematic style is rather utilitarian, but effective. He works with his own production company and a familiar crew that gives all of his work a similar feel, as though these films all take place in the same universe. This feeling of connectedness is bolstered by the use of a stock company of performers who take the work very seriously. Chitrangada Chakraborty has played a lead character in all three of his films and could certainly be looked upon as a muse of sorts, also returning is Vibhawari Deshpande, who has recently become a more recognizable performer following her stint in Netflix's Sacred Games. Vikrant Saraswant played the antagonist in his previous film as well, so there's definitely a shorthand that works in the film's favor.

For the most part, Devi Aur Hero is a solidly middle of the road drama with a novel twist on the concept of recovery from trauma. What makes it interesting is the way Kripalani interprets the possibilities for the characters. The flawed male lead trying to be his best against his own urges and the almost angelic victim of violence being moved to fight back by forces so deep within herself she doesn't even realize they are there create an interesting dynamic. The film does need a bit tighter, more dynamic editing, perhaps a bit more active camerawork to really bring the characters alive. That being said, Kripalani clearly has a goal in mind, and I have every confidence that the film we see on screen is exactly the result he pictured all along.