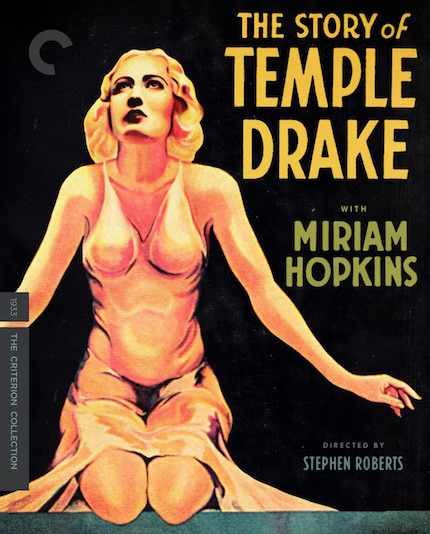 The Criterion Collection has recently released The Story of Temple Drake, a film that was essentially lost to quite a few of us. It was adapted from the notorious William Faulkner novel "Sanctuary," and directed by Stephen Roberts (who made nearly 100 shorts in the '20s and '30s before getting into features.

The Story of Temple Drake features Miriam Hopkins in the titular role as a socialite and judge's daughter who likes playing the field. Of course, this leads to her downfall. It's not long after Temple turns down a marriage proposal from a good dude that leads to ruin.

She gets in a car with a foppish, drunk lad and off they go to get into an accident. After they come to, they're hearded to a once-grand Southern mansion, now dilapidated and home to criminals and the downtrodden woman who has to put up with them.

Temple is sexually assaulted by murderer, bootlegger, and all-round bad man Trigger. From there, he takes her to the city and pimps her out. But a visit (to supoeneia Trigger) from her would-be fiancee, laywer Steve, drives her to murder, herself.

Will she take the stand and stand up for justice in trial, but in doing so, expose her shame and deeds to the world? Watch The Story of Temple Drake to find out.

For a film from 1933, this restoration is nothing short of miraculous. The sound is just wonderful, and the picture looks utterly fantastic in most sequences, which really highlight the richness of the shadow and cinematographer Karl Struss' lighting.

I found the special features on this Blu-ray release fascinating. In one featurette, cinematographer John Bailey and director of the Margaret Herrick Library at the Academy of Motion Picture Arts and Sciences, Matt Severson, look at the original storyboards for the film, which are really exquisite little pieces of art themselves. They resemble German expressionism films, like The Cabinet of Dr. Caligari, as well as German block woodcut art. In short, these small paintings are tortured and bleak. It's really cool to watch this featurette directly after seeing the film, because you can compare the images in the movie fresh in your mind.

Another great featurette with critic Imogen Sara Smith offers lots of insights about the techniques used within the film, what society was like in the 1930s, and how an audience might read into the themes presented in one way or another.

Likewise, critic Mick LaSalle discusses the times in which the film was made, censorship, and the Production Code Administration. This Hollywood agency, which was in place from 1934 - 1968, policed films with a code of morality. While it did that for way too long, the men in charge of setting ethical standards in film here in America were quite corrupt themselves, but that's another story.

I really enjoyed this release Criterion has put together; it's a piece of Hollywood history that most don't know about, and it's important to preserve film, especially those that were essentially lost due to society pressure and "morals."

To order and read more on The Story of Temple Drake, head on over to the Criterion website here.

The Story of Temple Drake