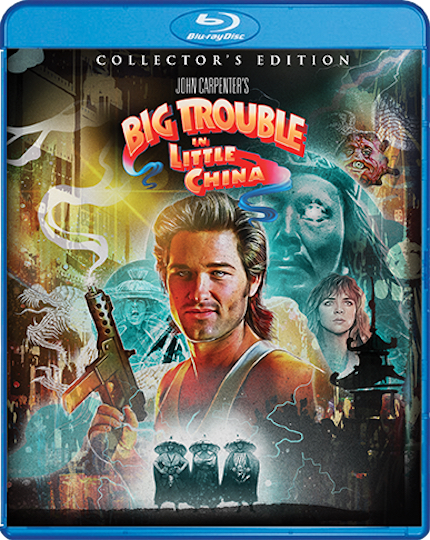 Shout! Factory's genre label Scream Factory has become the Blu-ray home of legendary filmmaker John Carpenter as of the last few years, and the latest release is the kung-fu action flick Big Trouble in Little China.

Made just before lead Kurt Russell (as goofy, yet self-important trucker Jack Burton) became a star, Big Trouble in Little China came out in 1986. This was after both Carpenter's dread-filled, existential opus The Thing and the TV film Elvis, both of which Russell starred in.

Okay. So, I still don't know how I feel about Big Trouble in Little China; it's a very strange film that's both a modern Western set in San Francisco as well as a hyperactive, deeply and darkly magical Eastern extravaganza. There's some regrettable stereotyping and laughable exposition, but the end result is also something you can't really look away from. Big Trouble in Little China is like if kids were let loose to play their insane childhood games from the '80s, but those kids happen to be fully grown.

I'm going to attempt to write a synopsis, but it's difficult with so many nonsensical events, characters, twists, and turns. Okay. So Big Trouble in Little China follows Burton as his friend Wang Chi's (Dennis Dun) fiance is kidnapped at the airport. Gracie Law (Kim Cattrall) is an advocate of some sort, and happens to be there.

It seems that her client and the fiance are confused, but this may be on purpose as the new woman has green eyes, which is something rare that the crime boss/practioner of the dark arts David Lo Pan (James Hong) has sought for centuries. Of course, Gracie also has green eyes, so it's not long before it's kidnap one, get one free.

Burton and Wang head to Chinatown where they run afoul of two warring gangs, as well as the magical Thunder, Rain, and Lightening, who descend from portals in the sky and then all Hell breaks loose. Honestly, the rest is a fever dream of madness and absurdity, but like I said, you can't look away, and this is a fun film. My attempt to describe the plot stops here.

In terms of how Big Trouble in Little China looks and sounds, I can say that Scream Factory has done it again with a gorgeous restoration. Sound is crisp and clear, and the picture is fantastic --- colors are bright and pop, and the shadows and darks are rich.

There's an INSANE amount of featurettes, which will take you hours to peruse. Here's the ful, exhaustive list:

DISC ONE: THE FILM

I haven't been able to get to every single featurette, as it's December, and life is more hectic than usual. However, having met special effects rockstar Steve Johnson, I'm sure that his new commentary is both sidesplitting fun and sarcasm galore.

Many of the new interviews go on forever, but Tommy Lee Wallace (second unit director here, as well as director of Halloween III: Season of the Witch and childhood friend of Carpenter) is a welcome addition, as is prolific, legendary poster artist Drew Struzan.

The older interviews ported over from the last release are great, especially the ones with Carpenter, Russell, and producer Larry Franco, and cinematographer Dean Cundey. It was cool to hear from Nick Castle, another key Carpenter figure, as well as to learn how the  Big Trouble in Little China evolved from an actual Western to its final form, from writers W.D. Richter and Gary Goldman.

If you're a huge Carpenter fan, you might already have this film in your collection, but... it can't hurt to have this great edition. Recently released this month, you can order the collector's edition of Big Trouble in Little China from Scream Factory over on their site here.