SHUDDER in December: THE HEAD HUNTER, DEADLY GAMES And a Host of Craven Faves to Cap Off The Year

The Horror-day season continues into December as our friends at Shudder prepare to host a month of yuletide fear. In the gallery below you will find all the releases coming up in December in the U.S. Canada and the UK.

To close out the year, we are proud to bring you the epic, medieval-horror sensation THE HEAD HUNTER (100% fresh on Rotten Tomatoes), two internationally-acclaimed thrillers TRIVISA (a Hong Kong Film Awards’ Best Film winner) and ISKANDER: SHADOW OF THE RIVER (a binge-worthy crime miniseries set in French Guiana), JOE BOB’S RED CHRISTMAS an all-new The Last Drive-In special, our Unhappy Holidays collection of Christmas terrors (including the U.S. streaming premiere of a cult French favorite), a trio of beloved Wes Craven movies, a Tom Savini documentary and so much more.

Next month there is no shortage of great horror and genre titles, starting with festival circuit sensation The Head Hunter. It didn't play at a lot of festivals but where it did it blew up the audience watching it. It was definitely the envy of many a programmer who wanted to show it at theirs.

As far as festive features are concerned there will be Joe Bob's Red Christmas special on Friday the 13th. Then there was the for a time super rare Deadly Games (a.k.a. 3615 Code Père Noël, Dial Code Santa Claus), the French child in peril holiday film that preceded Home Alone and is many shades darker. If you have not been lucky enough to catch this treasure on the rep cinema circuit you can finally see it on Shudder on December 2nd.

There is also a trio of Wes Craven films coming next month: The People Under the Stairs, The Serpent and the Rainbow and one that I have not seen since I was a teenager Shocker.

Take a look at the gallery below and note when your favorites are coming to Shudder next month. 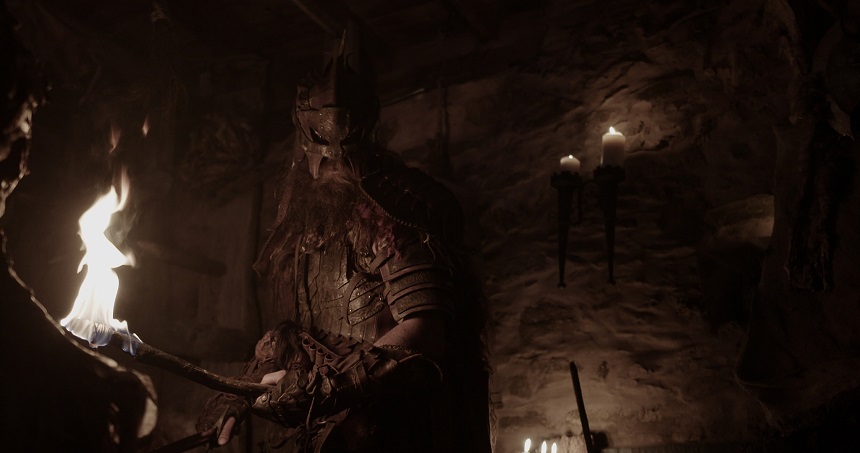 On the outskirts of a kingdom, a quiet but fierce medieval warrior protects the realm from monsters and the occult. His gruesome collection of heads is missing only one — the monster that killed his daughter years ago. Driven by revenge, he travels wild expanses on horseback looking for the monster. When his second chance arrives, it’s in a way far more horrifying than he ever imagined. Starring Christopher Rygh and Cora Kaufman, directed by Jordan Downey. A SHUDDER EXCLUSIVE (Also available on Shudder Canada and Shudder UK) 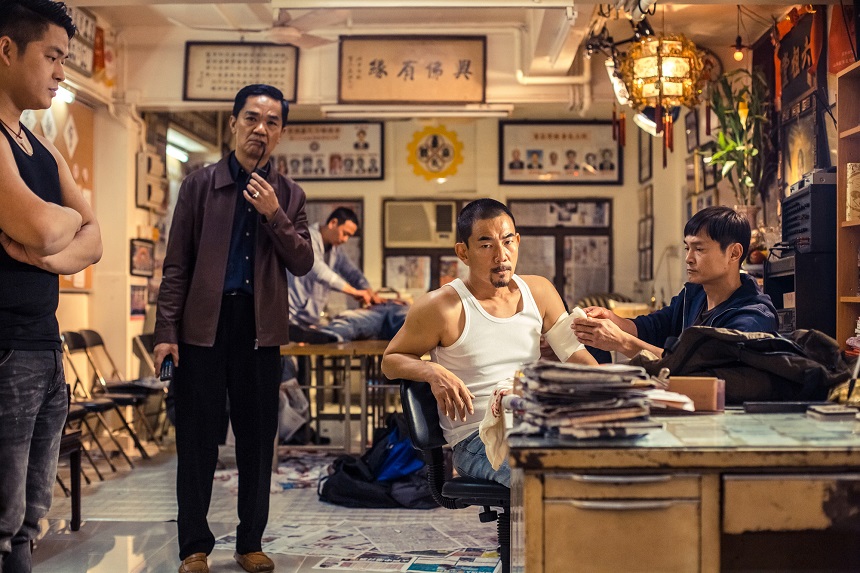 Three notorious gangsters (“kings of thieves”) who have never crossed paths find themselves in the same restaurant at the same time, and their fates are changed forever. This fictionalized story about three real-life criminals was showered with awards and nominations, including Best Film at the Hong Kong Film Awards. A SHUDDER EXCLUSIVE. Starring Richie Jen, Jordan Chan, Ka and Tung Lam, directed by Jevons Au, Frank Hui and Wai-Kit Wong. (Also available on Shudder UK) 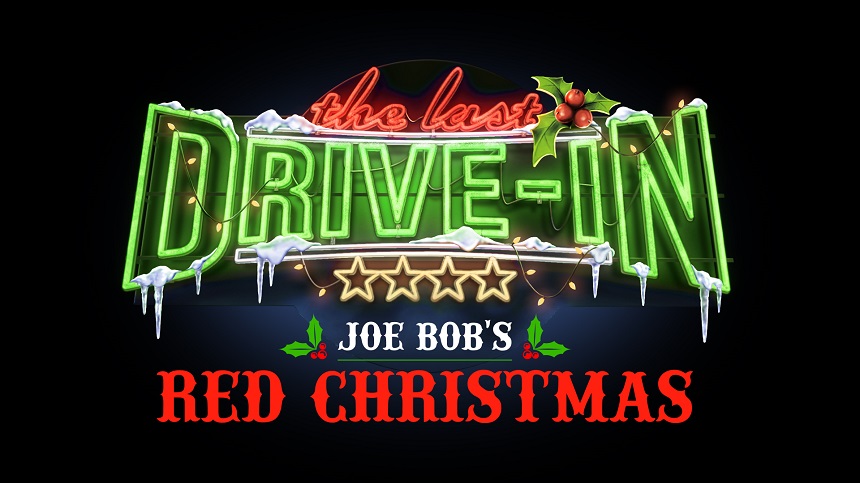 It’s Friday the 13th and Joe Bob Briggs, America’s foremost drive-in movie critic, is back for an all-night triple feature of hand-picked holiday horrors, running the gamut from the cult to the classic to the truly bizarre. Stock up on Lone Stars and make plans to stay up late with Joe Bob and Darcy the Mail Girl on this special, eggnog-fueled edition of The Last Drive-In, streaming live on Shudder TV beginning at 9pm ET/6pm PT. As is customary, the hosted versions of all three films will also be available later on demand. (Also available in Shudder Canada) 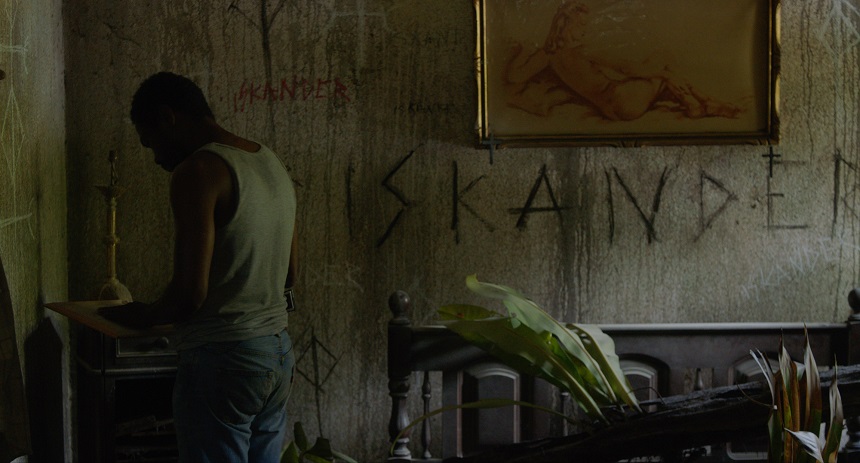 In French Guiana, a couple have been slaughtered on their boat and their young son is missing. The case falls to a pair of cops who don't exactly get along: Chloe—a rookie on her first day, newly arrived from France—and Dialo, her Guianese partner, a local cop who knows the territory and its secrets all too well. The clues lead them on a feverish journey through the city and deep into the rainforest, where ancient rituals connect the crime with a disturbing and unsettled past. This four-episode French miniseries is an intense, tropical thriller that's perfect for binging. A SHUDDER EXCLUSIVE. (Also available on Shudder UK) 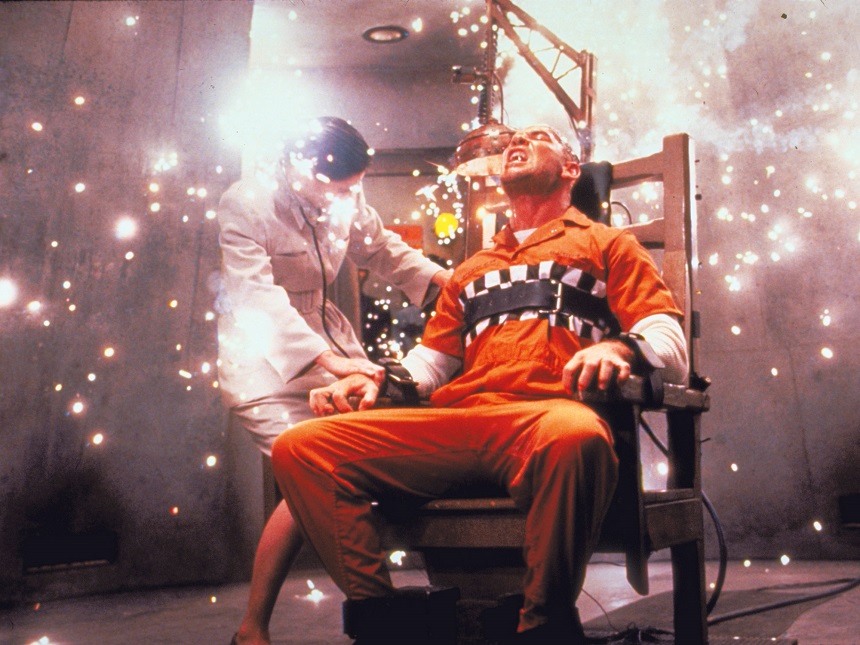 When a single mother and her two sons move to the sleepy seaside California town of Santa Clara, they discover much more than they anticipated in this visually stunning blend of humor, horror and rock 'n' roll about the most compelling group of contemporary vampires ever to put fang to vein. Starring: Kiefer Sutherland, Corey Feldman, Jason Patric, Corey Haim, Dianne Wiest

The People Under the Stairs (Director: Wes Craven)

With hopes of stealing a stash of gold, Fool, a 13-year-old, breaks into his landlords' creepy house with two friends. Things soon go terribly wrong as the trio find they can't get out, uncovering a horrible secret: cages of deformed children kept in captivity under the stairs! King of Horror Wes Craven delivers a freaky, fun, socially savvy scare in this 90s gem. Starring: Brandon Adams, Ving Rhames, Everett McGill, Wendy Robie, A J Langer

The Serpent and the Rainbow (Director: Wes Craven)

Wes Craven directs this frightening excursion into the supernatural as one man goes to Haiti to retrieve a powder that has the power to bring humans back from the dead. Starring: Zakes Mokae, Paul Winfield, Cathy Tyson, Bill Pullman

After being sent to the electric chair, a serial killer uses electricity to come back from the dead and carry out his vengeance on the football player who turned him in to the police. Starring: Cami Cooper, Mitch Pileggi, Peter Berg, Michael Murphy

Tanya, a sexually curious virgin falls for Charles, the new boy in school—only to learn too late that he's a life-sucking “sleepwalker.” Charles and his mother are the last of a dying breed who are able to stay alive only by feeding on the life force of virtuous young women. Able to mutate at will, they roam the Earth, forever fleeing discovery while searching for the next victim. But it turns out that the sleepwalkers' Achilles' heel is the domestic house cat, with whom they share genetic information. Starring: Brian Krause, Alice Krige, Ron Perlman, John Landis, Madchen Amick 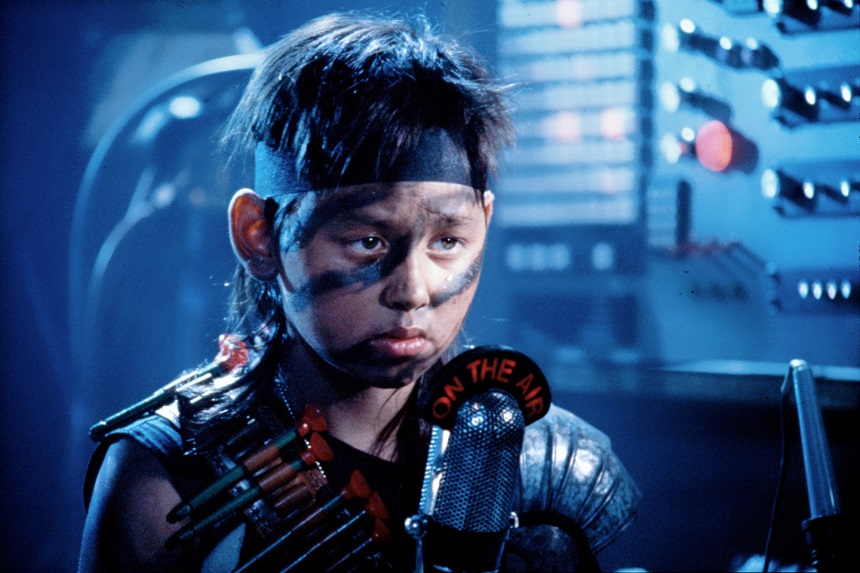 He is nine years old. His name is Thomas. He is a little genius. He believes in Santa Claus. His two favorite pastimes: computers and super heroes. December 24th, midnight. Hidden under the dining-room table, Thomas waits for Santa Claus. But what he doesn’t know is that he is about to experience the most frightening night in his entire life. Starring: Patrick Floersheim, Alain Musy, Brigitte Fossey, Louis Ducreux, François-Eric Gendron (Also available on Shudder Canada)

IT'S GARBAGE DAY! Ricky is getting out of the mental hospital, but he takes with him the terrifying memories of his brother Billy's death—and of Mother Superior, who brought about his sibling’s demise. Starting a new life means avenging his brother, which sets him on a journey of revenge. And when he gets to Mother Superior, not even her faith will be enough to stop Ricky as he follows in the family tradition of Christmas carnage. Starring: Eric Freeman, James Newman, Elizabeth Kaitan 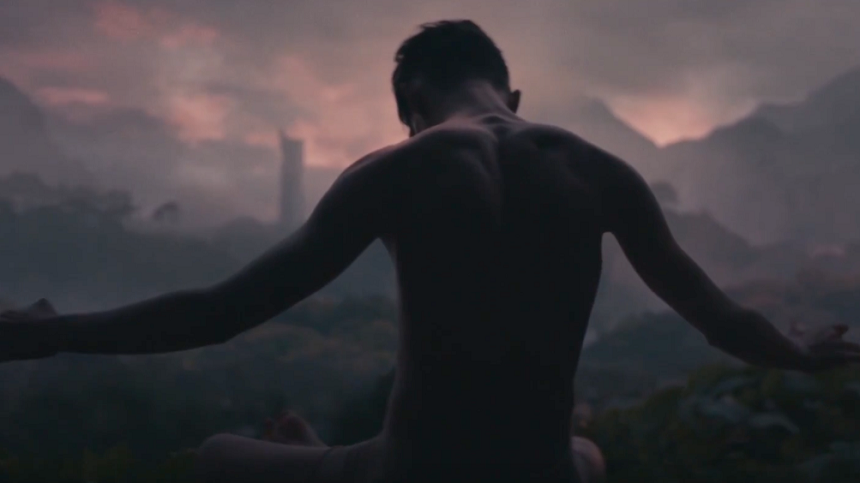 Produced and scored by Flying Lotus and executive-produced by Steven Soderbergh, PERFECT introduces Garrett Wareing as an emotionally-troubled young man. His mother sends him to a clinic, where modernist serenity whispers soothing promises of perfection. By planting plug-and-play enhancements directly into his own body, he is relieved of his dark, twisted visions, but his body pays the price for purity of mind. Starring: Garrett Wareing, Abbie Cornish, Courtney Eaton, Tao Okamoto

In Ursula Dabrowsky’s twist-filled thriller, a teenage girl must fight for survival when she’s kidnapped by an evil psychopath couple with a taste for torment. Samantha soon manages to escape into the woods where she stumbles into a secluded home. But Sam’s story, and her long night of terror, is far from over. This house belongs to someone she’s already met, and there may be another resident living there–one who’s not exactly flesh and blood. Nobody does brutal crime thrillers better than Australia, and this seriously scary story is no exception to that rule. Starring: Sarah Jeavons, Kerry Ann Reid, Andreas Sobik (Also available on Shudder Canada and Shudder UK) 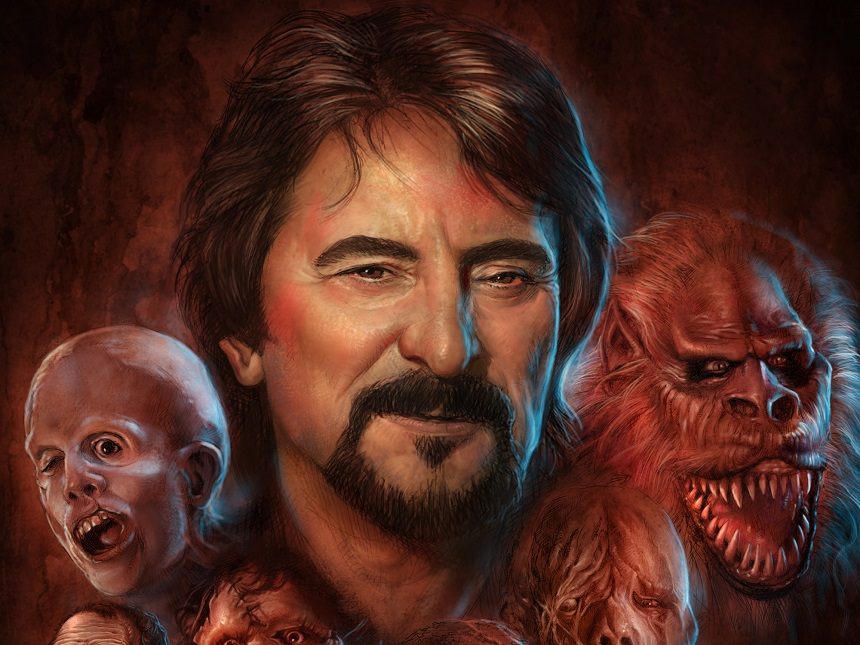 Norris, an idealistic and naive music teacher has moved into a new community with his pregnant wife, only to find his new job is an academic abyss. Appalled by the crime-infested school, Norris soon crosses paths with its teenage kingpin, the shrewd and sadistic Peter Stegman. With Norris setting his sights on reforming Stegman and the young punk declaring war on his teacher, the duo is on a collision course for a fateful showdown. Starring: Perry King, Merrie Lynn Ross, Timothy Van Patten, Michael J. Fox

From the Dark (Director: Conor McMahon)

A young couple are terrorized by a mysterious creature that thrives on darkness in this Irish horror film from the director of Stitches. Woe to Sarah whose boyfriend Mark ignores their GPS, landing them smack in the path of a truly frightening monster. Together, the couple must wield light-making devices to escape—before it's lights out on them. Starring: Niamh Algar, Stephen Cromwell, Ged Murray

STREAMING PREMIERE! Special Makeup effects legend, actor, director and stuntman Tom Savini has redefined the horror genre with his arsenal of talents. But who is the man behind the "KING OF SPLATTER?" From his childhood in Pittsburgh to his tour of duty during Vietnam, to his beginnings with George A. Romero and beyond, Smoke and Mirrors is the defining documentary on the life and career of a horror icon. Featuring: Tom Savini, Danny McBride, Robert Rodriguez, Danny Trejo, Alice Cooper, George A. Romero, Greg Nicotero, Sid, Haig, Doug Bradley, Caroline Williams, Jerry Only, Tom Atkins, Jerry Only, Corey Feldman, Howard Berger (Also available on Shudder Canada)