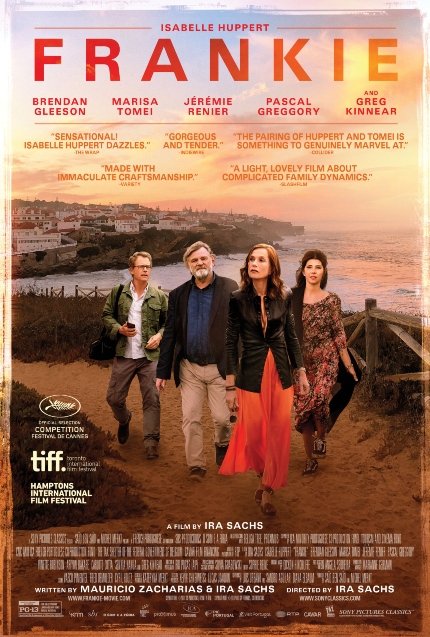 Life is but a whisper that floats away on an endless sea.

Frankie
The film is now playing in select theaters in the U.S. and will expand on Friday, November 8, to more cities, including my own Dallas, Texas, all via Sony Pictures Classics.

Spending a day lazily in a beautiful seaside town in Portugal sounds like the definition of the idle rich.

It's the perfect setting, though, for a contemplative study of a group of individuals from different generations, all on the cusp of change. Also, for all the apparent rest and relaxation that the characters are meant to be enjoying, each one is facing momentous decisions.

Françoise Crémont, the titular character, is the fulcrum. Known as Frankie, she is an actress of some renown who is in the last stage of her life. She has gathered her extended family to impart good wishes in a few kind words. As inhabited by the great Isabelle Huppert, we believe Frankie is a woman who has gained all the wisdom in the world; if people wish to listen to her, fine. If not, that's fine too.

Sachs is a keen observer of behavior, especially the manner in which people talk to each other, the varying levels of comfort that are expressed in the tone, nature, and length of their conversations. In Frankie, written by Sachs and Mauricio Zacharias, a collaborator for Sachs' previous three features, Frankie is shown to be someone who does not shy away from strangers (or her fans).

She is always polite and open, yet she also knows how to conclude a conversation in a graceful manner, without making the other person self-conscious about their awkward foolishness. In other words, she is not a put-down artist; she is far too sensitive to do that. Even so, her tolerance for foolishness is limited, especially as the end of her life draws ever closer.

The people she has invited to this final gathering are sketched in lightly, with a variety of depth. The guests include her first husband (Pascal Greggory), her current husband (Brendan Gleeson), her children (Jérémie Renier, Vinette Robinson), and possibly her best friend, makeup artist Ilene (Marisa Tomei), who unexpectedly brings along her current beau Gary (Greg Kinnear).

Some of them know about Frankie's prognosis, some of them don't, and so their actions during this day are guided accordingly. They are all dealing with their own personal challenges; whether those are important to others or not, whether they are trivial or not, they are consumed with their individual problems.

In a broader sense, it would be easy to dismiss the private dramas of privileged people who get to spend a day in a seaside town in Portugal as nothing more than a wistful fantasy. Yet filmmaker Ira Sachs and the quietly effective ensemble cast gently lay bare the mixed-up, confused state of mind of most of the characters. Clear thinking is at a premium and Frankie has it in abundance.

Summing up: A gentle drama that displays kindness towards all as it explores the inner lives of its characters, exposed for all to see.

Read a recent interview with the director here, conducted by our own Eric Ortiz Garcia. For more information about the film, visit the official site.