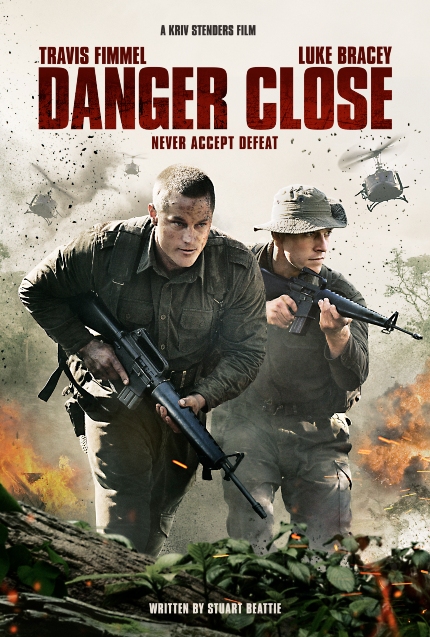 War can be fascinating, especially if it's not happening to you.

Danger Close
The film opens in theaters, On Demand and on Digital on November 8, 2019, via Saban Films.

Putting things into context can be a risky business.

In August 1966, the armed conflict in Vietnam had already been waged for more than 10 years. Combat soldiers from Australia and New Zealand began arriving the previous year, but as depicted in Danger Close, they were mostly inexperienced, untried, and rather bored. Only a few military veterans were eager for action.

Near the Long Tan rubber plantation, the war came to them. After several small units of troops were dispatched on what was expected to be another routine night patrol, an unexpected wave of Viet Cong and North Vietnamese soldiers attacked, and the soldiers came under heavy fire in the field. Pinned down and ordered to return to base, Major Harry Smith (Travis Fimmel) -- a veteran who was among the relatively few who were eager to engage in battle -- declines, electing instead to mount a make-shift operation to save any survivors possible, despite a low probability of success.

Based on true events, the film quickly paints a series of admiring portraits in military courage. Facing overwhelming odds as enemy troops continue to arrive, the soldiers all display outstanding bravery, exceeding the call of duty as they make self-sacrificing decisions in the face of deadly fire. They see friends slaughtered before their eyes, but there is no time to mourn, only to keep shooting in the hopes of defeating the enemy.

Directed by Kriv Stenders, the film is somewhat preoccupied with the strategies that were employed and then disregarded by the military leaders, leapfrogging from one point to another on the field of battle through shots that ascend into the air before diving below like guided missiles. Action on-the-ground is depicted with a degree of confusion and desperation as the soldiers ankled one hiding place for another, always angling for a better shot upon the enemy.

Overall context is completely lacking in the film itself. It's taken for granted that viewers will already have some knowledge about the battle's importance, and perhaps that is 100% the case for viewers in Australia and New Zealand.

Also, only skeletal characterizations are provided, so beyond basic human compassion for any human being whose life is in danger, it's rather difficult to grasp exactly why the Australian military leaders were so insistent on preserving their base of operation, and why that took priority over saving the lives of their soldiers. This makes it difficult to empathize with the soldiers who are risking everything, when we are not clear on the larger stakes involved.

As a child in the U.S. during the 1960s, I was completely unaware of any of the issues involved in Vietnam; that all came later. Nowadays, I welcome any new perspectives offered, especially from the point-of-view of those I didn't even realize were involved, such as soldiers from Australia and New Zealand who fought and died in the war. Some perspective from the Vietnam side of the conflict would also be welcome.

Summing up: Solely focused on the soldiers from Australia and New Zealand involved in the Battle of Long Tan, the cinematic hagiography seeks to honor their memory and succeeds. Beyond a core audience, however, most other viewers may remain nonplussed.

Do you feel this content is inappropriate or infringes upon your rights? Click here to report it, or see our DMCA policy.
AustraliaLuke BraceyNew ZealandRichard Roxborough. Kriv StendersTravis FimmelVietnam