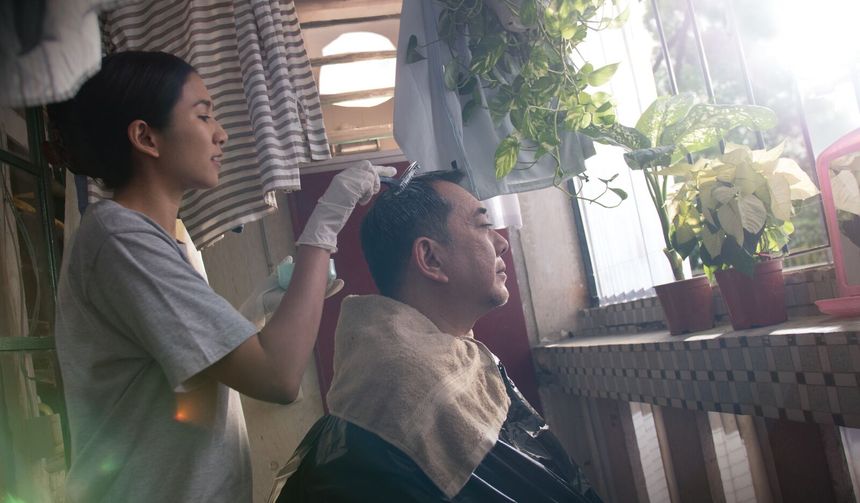 Directed by Oliver Siu Kuen Chan, Still Human tells the story of a friendship that blossoms between a man living with a disability and his live-in Filipina caregiver.

Veteran Hong Kong actor Anthony Wong plays Cheong-wing, who was paralyzed in a work accident. His wife and son left him some years ago, and he is understandably having a hard time seeing his situation in a positive light. Crisel Consunji plays the new caregiver and maid, Evelyn, a young woman fleeing a loveless marriage and hoping for a fresh start in a different country.

Evelyn quickly connects with a social circle of fellow caregivers from the Philippines, who promptly advise her to pretend to be stupid -- and never learn Cantonese -- in order to avoid being tasked with extra work and responsibilities. She tries this on her employer, but he gets wise to it pretty quickly and the two realize that it would be more helpful to be able to understand each other. Cheong-wing begins to learn English to communicate with Evelyn, who asks him to teach her Cantonese. This leads to many amusing lost-in-translation language gags.

Both Cheong-wing and Evelyn are isolated people, removed from their usual communities and support systems. It's predictable as a plot point when they begin to bond, but not unbelievable. They spend most of their time together, and grow to understand one another in ways that those orbiting outside their lives cannot. Wong and Consunji each give incredibly moving performances during the tear-jerker moments (of which there is a staggering number), and are equally magnetic when executing comedic delivery.

Now for the weak stuff: Still Human is another victim of the overly stylized sentimentalism that plagues much of mainstream Hong Kong cinema. Scenes that are already plenty heartbreaking on their own are dragged down by a cloying piano score. The camera will often linger too long on a smiling face caught in a sunbeam. At one point, Evelyn launches into a painfully earnest speech about waiting for true love, complete with rising inspirational music and the shot slowly tightening in on her ebullient face. I was reminded of Laura Dern's Sandy reciting her robin dream in Blue Velvet, but minus David Lynch's dark irony.

Furthermore, while the core relationship is well developed, the peripheral themes are shallow. The movie touches on some of the racism that Evelyn and other immigrants face in Hong Kong, but it doesn't delve too deeply into these issues.

Rather, it seems preoccupied with painting the domestic worker/employer dynamic as misunderstood and mutually beneficial; there is a scene where a friend of Evelyn's is distraught when her long term boss passes away, because they had been so close. It doesn't explore the many abusive imbalances of power that occur in less friendly households.

For the two lead performances alone, Still Human is definitely worth a watch. It was an audience favorite, and has been selected as one of the films to return for VIFF Repeats, a post-festival series highlighting and reprising a small selection of the fest's most popular movies.

A few serious tweaks and it could have been truly great, even echoing Ann Hui's A Simple Life (another heartwarming, Hong Kong-set odd couple film). Alas, those are perhaps unfairly large shoes to fill.