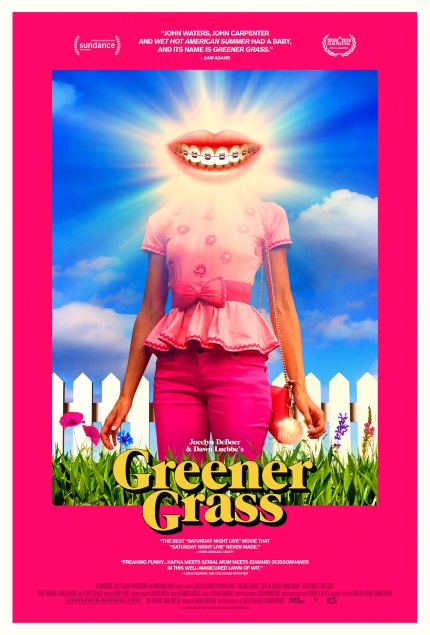 Imagine what hell might be spawned if David Lynch and Martha Stewart had a baby that they then gave to John Waters to raise, and you might be somewhere in the neighborhood of the genius that is Dawn Luebbe & Jocelyn DeBoer's Greener Grass. A biting absurdist satire of the suburban upper middle class nestled inside of an insanely hilarious set of picture perfect comedic performances, Greener Grass is an absolute stunner from top to bottom, proving that there is still magic in cinema and not everything has been done before.

Jill (DeBoer) and Lisa (Luebbe) live in an idealized suburban planned community painted in pastels somewhere in small town, USA. Within their neighborhood, everyone knows everyone else, and the compliments never stop coming. They live a life of comfort, with well appointed suburban homes, nearly all their wants and needs accounted for, and nary a care in the world. At least that's how it starts. This is the kind of place where if you don't have anything nice to say, you don't say anything at all, and god help you if you turn away a friend in need.

The film opens on a kids soccer game with Jill and Lisa cheering on their boys. Lisa's aggressive son Bob, stomping across their field after the ball, while Jill's little boy, Julian, stands around, waiting for an excuse to get pulled out of the game. While the ladies are chatting with each other and when Lisa compliments the cuteness of Jill's new baby girl, Madison, the latter instantly offers the fruit of her loins to her best friend, because god forbid there be any envy between them. Lisa accepts, instantly takes the little girl home, renames her Paige, and life goes on. This is the kind of movie we're dealing with, and that's just the beginning.

In a world so cleanly drawn from only the most perfect of pastel palettes, there are bound to be a few cracks, and when these cracks begin to appear in the lives of Jill and Lisa, they simply don't know how to cope other than to pretend that everything is okay. Their husbands, Nick (Beck Bennett), and Dennis (Neil Casey), are similarly ineffectual at pretty much anything the real world requires to survive, but they all put on a happy face and plow through life with an admirable vigor.

Slowly but surely, thing start to unravel when it turns out that perhaps giving away her baby wasn't the best decision Jill had ever made, Lisa's son Bob turns into a literal hellspawn after a few minutes in front of a questionable TV program, and surprise pregnancies and divorces throw both their worlds into chaos. But everyone must pretend that everything is okay, because that's just how it's done, no matter how ludicrous the circumstances.

Absolutely bursting with overlit, pastel pinks, blues, and purples, Kristin Gibler's art direction and Leigh Poindexter's production design are impeccable and evocative of a simpler time in America that never really existed. Captured with the kind of hazy beneficence that only soft focus can bestow by cinematographer Lowell A. Meyer, the visuals of Greener Grass tell the story just as much as any plot device. As if that weren't enough, the music lurches back and forth between Donna Reed-esque dreaminess and horrific strains that impart a kind of violence to scenes in which the only daggers are the ones coming from the eyes of the envious. Samuel Nobles' first feature score is a work of discordant beauty; he tackles an ambitious project with aplomb and leads the audience in ways that dialogue can't.

Landing somewhere between the dreamy hellscape of Lynch's Blue Velvet and the joyous vulgarity of Waters' Polyester, Greener Grass occupies an odd space of its own in the annals of the suburban satire. This debut feature film from a pair of wildly imaginative writer/director/performers is the kind of hugely ambitious project that can make or break someone. Thankfully, Greener Grass never hits a sour note and is a huge crowd-pleaser. One of my absolute favorite films of the year, Greener Grass is destined for well-deserved cult classic status.

Review originally published during the Oak Cliff Film Festival in June 2019. The film will open in select U.S. theaters via IFC Midnight on Friday, October 11, 2019.

Do you feel this content is inappropriate or infringes upon your rights? Click here to report it, or see our DMCA policy.
Beck BennettDawn LuebbeJocelyn DeBoerNeil CaseyUS