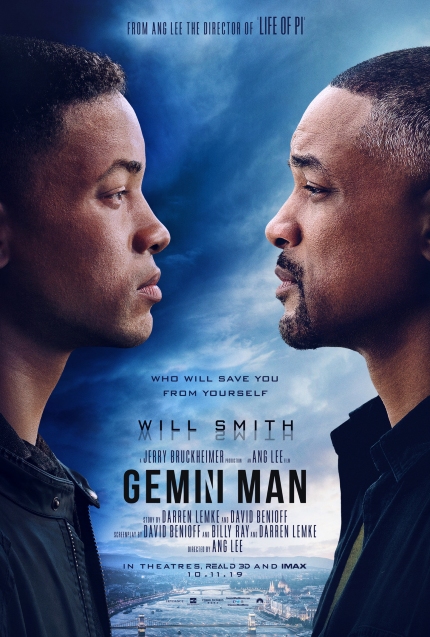 Gemini Man
The film opens in theaters throughout Canada, the U.S., and many other countries worldwide on Friday, October 11, 2019, via Paramount Pictures.

During the heyday of high-concept action movies in the 1990s, Ang Lee's latest would-be extravaganza would have fit in perfectly.

Instead of cloning dinosaurs, as in Michael Crichton's novel Jurassic Park, brilliantly realized by Steven Spielberg in 1993, the high-concept premise here revolves around cloning assassins. To be more precise, 50-ish Henry Brogan (Will Smith), a deadly government assassin, decides to retire, whereupon he himself becomes a target for assassination, led by a younger, cloned version of himself.

Whoa! Cool! I want to see that movie!

Reportedly, Darren Lemke's premise was hatched in 1997, or, soon after Dolly the sheep was cloned. The idea and its execution might have caused jaws to drop in the late 1990s, especially if it was directed by Tony Scott, as touted at the time.

Here in the modern day, we are presented with Ang Lee's treatment of the idea, based on a screenplay credited to David Benioff, Billy Ray, and Darren Lemke. It's a perfectly fine and serviceable action movie, rooted in the 1990s as far as the characters and plot twists are concerned, with nods to the modern day.

It's also the kind of movie that condemns the very idea that it revolves around, the equivalent of a war picture that is mounted with great care, exquisite detail, and loving attention to the beauty of weapons, before whipping around to declare: "War is bad!" as though no one had ever thought of that before. Except that now, in the year 2019, we have lived with the idea of clones on the big screen for more than a quarter-century, since Spielberg's dinosaurs lumbered and sprinted and chomped up people, and it is natural that we expect more than a presentation of imperfect technology that enables "old" Will Smith to fight against "young" Will Smith.

Too often, Gemini Man appears to interrupt the narrative and invite viewers to marvel at the images before them, as though none of us had ever seen a movie before. Some of those images are indeed marvelous; multiple close-ups are startling for their intensity. (Lee intended for the film to be presented in 3D at 4K resolution and 120 frames per second, but at the advance screening I attended, the film was presented in 2D at a lower resolution, and not at 120 frames per second.)

Even so, this is an action film directed by Ang Lee, and so the action sequences reflect his long-established preference for a stately procession of images, as shot by director of photography Dion Beebe and cut by film editor Tim Squyres, rather than a rapid-fire assemblage. This works splendidly in dramatic scenes, yet tends to undermine the action sequences, which are extremely well-lit and impressively staged, while resisting any emotional engagement with what's happening.

Will Smith emotes all over the place, while Mary Elizabeth Winstead brings balance and dramatic order (and convincing action moves) as Danny Zakarwesky, an operative who willingly joins the rogue killer after an attempt on her life. Clive Owen brings the expected evil as a rogue government manager, and Benedict Wong brings touches of humor and humanity in his supporting role as a friend and former compatriot of the protagonist.

Summing up: Nice try! And satisfying, especially if you enjoy a little wistfulness to go with your action scenes.

Do you feel this content is inappropriate or infringes upon your rights? Click here to report it, or see our DMCA policy.
Ang LeeBenedict WongClive OwenMary Elizabeth WinsteadWill Smith