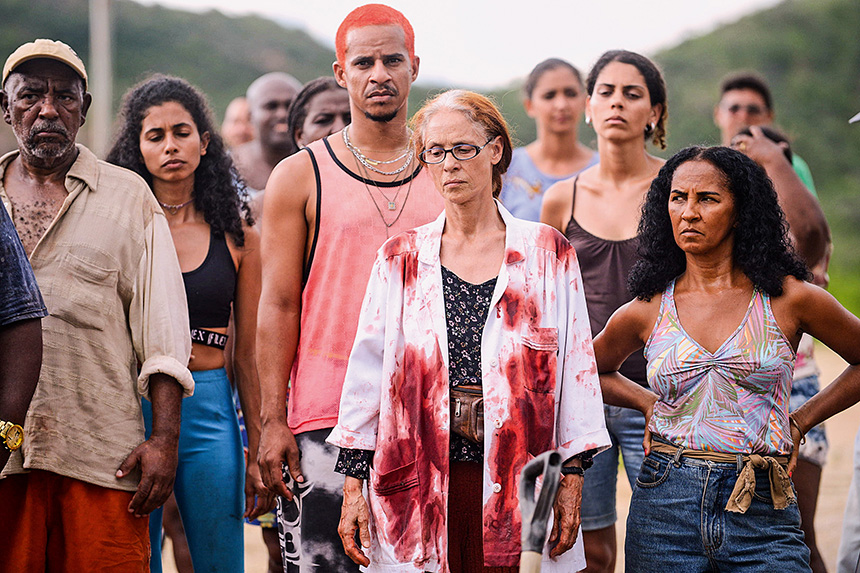 Let's consider what's been happening in Brazil before we talk about batshit crazy movie that is Bacurau (from the makers of Neighboring Sounds and Aquarius - Director Kleber Mendonça Filho and co-director/production designer Juliano Dornelles). In early 2018, Luiz Ignacio Lula de Silva, commonly known as Lula, a much loved labor leader and former two-term Brazilian president, was barred to run for president again because of trumped up corruption charges and sentenced to 12 years in prison in all likelihood by opposing conservative Social Liberal Party, led by foul mouthed, all out bigoted racist who ran on his presidential campaign of fear and hate (sounds familiar?). It was widely expected that Lula was going to win. But him being jailed, his Worker's party's nominee Fernando Haddard ended up losing to Bolsonaro in the runoff. So now Brazil has the social conservative and known racist Bolsonaro for president. His pro-corporate, pro-logging, anti-regulation agenda is creating perhaps the most serious and heartbreaking eco-disaster in the Amazon Rainforest right now, as the rest of the world helplessly watch it burn in the sidelines.

Brazilian film scene was having its renaissance in the last decade under the Lula's Worker's Party leadership. The money was flowing in to arts and to the once neglected regions of Brazil. Pernambuco, a north east state with its multi-culti capital Recife became an economical, cultural hub, producing many emerging film directors like Filho, Adirley Queirós and Gabriel Mascaro. Bolsonaro's austerity measures will undoubtedly, put a damp on this growing Brazilian film movement which is perhaps the most significant, since the days of Cinema Novo.

So Bacurau is an angry film and deservedly so. It takes place in the near future. A dusty small town called Bacurau in the north east region of Brazil, is inhabited by a fiercely independent, self sustaining, proud people largely cut off from the outside world. The glimpse of satellite TV and radio tell grim stories of lawless in urban areas. Teresa (Barbara Colen) is returning to attend the funeral of the town's matriach. Evading the law and roadblocks guarded by heavily armed government troops, she is bringing medical supplies to the residents of Bacurau. There's shortage of everything - food, water, medicine, household items, tampons, etc. Everything is brought in from outside world and distributed among the townsfolk for their needs. Bacurauans seems to be a well organized social collective, living relatively well despite the rest of the world seems falling apart. The town, like any other small towns, people know one another and there are some frictions among them. But generally they get along.

Then we see a sign of trouble brewing. First, a farmer spots a UFO shaped drone in the sky. And two city folks in fancy motorbikes in neon colored spandex show up in town, confusing everyone. Their cockiness and otherworldliness is noted. They turn out to be a sort of a local guide for a heavily armed mostly American mercenaries, led by Michael (Udo Kier). They are there to literally wipe Bacurau off the map. Most of these gungho people-hunters are ex-military officers trying to blow off some steam by going to third-world countries and killing its inhabitants. They are armed with various antique weaponry of their choice and follow rules only they seem to understand. It's a game to them and has no interest even in where they are.

After few horrible massacres outskirts of the city, Bacurauans realize what's happening to them. But what the hunting party doesn't realize is that these Brazilian country hicks are weather worn, experienced and deeply proud people who are not going to go down easily. One by one, the hunters become the hunted.

It's kind of a departure for Filho since his previous films are, for better or worse, a lot more subtle in presenting the gentrification and monied people in fastly developing urban areas. Perhaps it's Dornelles' contribution to make Bacurau a little more tongue in cheek. Its cartoonish violence that Bacurauan inflicts on the hunting party is so over the top, you can't help but chuckling along. The acting also is very over the top. Udo Kier delivers some hilarious lines which only he could deliver. Great Sonia Braga (last seen in Filho's fantastic Aquarius) who plays the local doctor/the jealous sister of the dead matriachthe, grounds the film with her presence and charisma.

At a glance, without any context of what's happening in Brazil, as the Bacurauans get rid of foreigners and traitors, the film is a silly, tacky man-hunting-man horror movie akin to The Most Dangerous Game or Naked Prey or even Hostel or Ruins. But it isn't. Bacurau highlights the resilience and resolve of Brazilian people against mounting assault of multi-national corporations backed by government military to devastate their beautiful, once burgeoning country in the global crisis era we live in. It's an activist film in a B-Horror movie disguise. One of the year's best.

Do you feel this content is inappropriate or infringes upon your rights? Click here to report it, or see our DMCA policy.
Juliano DornellesKleber Mendonça FilhoBarbara ColenThomas AquinoSilvero PereiraThardelly LimaActionAdventureMysterySci-FiThrillerWestern