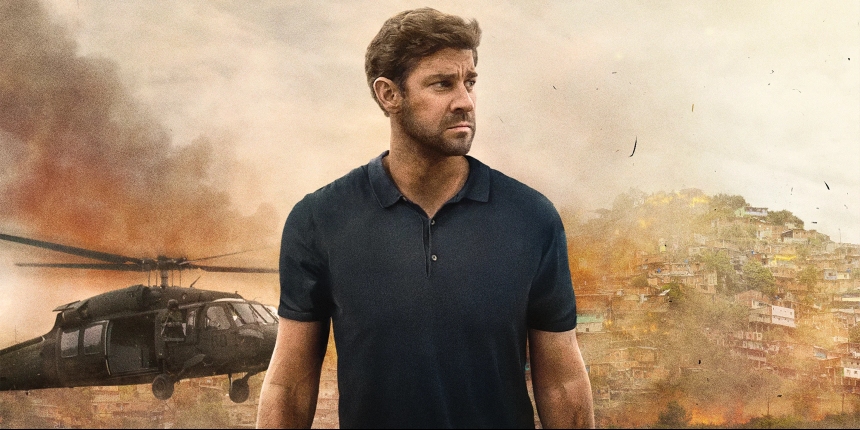 An action hero from the 1980s is reborn yet again in the modern day.

Hailing from an era in which men were men. the U.S. dominated the world, and weapons were really, really cool, nowadays Jack Ryan is a legislative aide who is bent on uncovering a criminal conspiracy.

Created by Tom Clancy in his novel The Hunt for Red October, first published in 1984, Jack Ryan is a former marine who serves as a CIA analyst. The character has morphed through the years, but proved to be instantly popular, featured in many more novels, and has survived the death of author Clancy in 2013 in a series of new books.

In feature films, the character has been portrayed by Alec Baldwin, Harrison Ford, Ben Affleck and Chris Pine. Last year, he was resurrected in the form of John Krasinski for an 8-episode series on Amazon Prime, created by Carlton Cuse (Lost) and Graham Roland (Fringe).

Retaining the character's backstory -- Jack Ryan is still a former marine who suffered a serious back injury and transitioned into a position as a whip-smart CIA analyst in Washington, DC -- Cuse and Roland sent Ryan into the Middle East to investigate a burgeoning terrorist plot, masterminded by a previously unknown underground leader.

Teamed with Wendell Pierce (The Wire) as James Greer, a grumpy new chief, the story ricocheted from the Middle East to Paris to Washington as Ryan steps easily in his role as American's Favorite Modest, Unsung Hero.

Picking up the story some months later, Greer has accepted a promotion within the CIA to Moscow, while Ryan turned down an opportunity to join him. Instead, now wearing a beard and completely disentangled from the doctor who was his girlfriend last season, he decides to join an old friend, who just happens to be a U.S. Senator, on a trip to Venezuela. Soon, Greer arrives from Russia, and together Ryan and Greer are quickly embroiled in a high-stakes plot involving widespread corruption.

All eight episodes were made available for preview, and what strikes me most about the second season is that Jack Ryan is solidified as a rogue lone wolf, occasionally in the company of other rogue lone wolves, not only Greer but also the CIA chief of station in Caracas, played by Michael Kelly (House of Cards). These are men who are painted as true heroes, even when they take actions that are definitely not heroic. (That includes Mr. Boy Scout himself.) They do not rely upon women, who are shown to be either rare angels or common alley-cats.

At times, the series edges into uncomfortable, nationalistic territory, where it's strongly suggested that weak foreigners need brave Americans as White Saviors (even if one of them is African-American). The Chief of Station, at least, speaks Spanish fluently, and Greer is semi-fluent, but Jack Ryan does not, so when he angrily demands information from someone who clearly does not understand a word that is coming out of his mouth, it's risible. Fortunately, that's an infrequent occurrence.

The show's writing staff is obviously aware of this possibility, and multiple pains are taken to show the cause and effect of political traumas upon the people, especially those incurred by their own leaders in Venezuela. The country has been in economic and political turmoil for years now, and so makes for an appropriate setting. But Jack Ryan comes awfully close to declaring that U.S. intervention is the only solution.

Simply as a dramatic television show, with a focus on action sequences, Jack Ryan works extremely well. A sub-plot follows a newly-recruited team of unofficial U.S. mercenaries in the jungle and their travails, which allows for plenty of explosions and copious anonymous soldiers to kill and to be killed. It's not really needed, but it fills in backstory for the primary story, and provides much boom, as it were.

Do you feel this content is inappropriate or infringes upon your rights? Click here to report it, or see our DMCA policy.
amazonCarlton CuseGraham RolandJack RyanJohn KrasinskiMichael KellyTom ClancyWendell Pierce