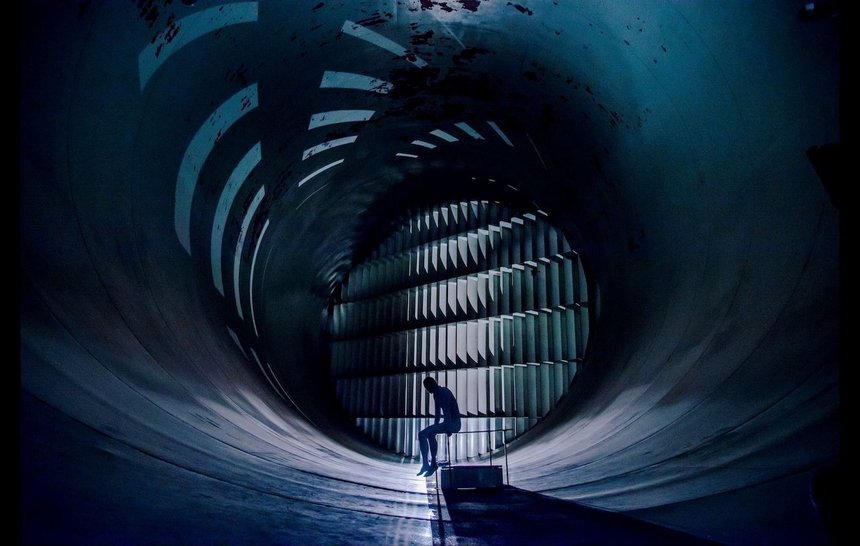 A journalist attempts to track down his scientist father in this trippy adaptation of the Stanislaw Lem science fiction classic, His Master's Voice. Péter (Csaba Polgár) is a thirty-something on the cusp of fatherhood, but an incredibly fraught relationship with his own Dad sends him on a journey around the world to try and track down the man who disappeared decades ago, leaving Péter and his brother Zsolt (Ádám Fekete) to wonder what became of him. What begins as a simple story of a man looking for his father, and by extension his own roots, quickly morphs into an incredibly complex conspiracy thriller in this bizarre adaptation of an already complex literary work.

Director György Pálfi is well known in the arthouse world for having created some of the most exciting experimental films of the twenty-first century. Films like Hukkle, Taxidermia, and Free Fall all play with the feature film format in very interesting ways using both form and design to accentuate various wildly disparate themes. With His Master's Voice, Pálfi reigns in some of the experimentation, sticking to a mostly straight-forward narrative with avant-garde flourishes to remind you that this isn't your father's science fiction.

Frequently rotating through nearly a dozen different methods of delivery (HD, YouTube, Skype calls, etc.), His Master's Voice is quite a schizophrenic affair. Rather than delivering a linear story with conventional methods, Pálfi manages to sneak in his own scattered ideas about the elements of Lem's original writing to varying effect. The disjointed nature of the film's structure does play toward Pálfi's strengths, but will leave many viewers scratching their heads.

Not only does the film cycle through different capture devices, it also changes tone with startling frequency. Pálfi's mixes humor with apocalyptic terror, confusion with conspiracy, and moves from micro (familial squabbles) to macro (intergalactic implications of a message received from space) willy-nilly, making the themes a bit difficult to nail down.

Pálfi has made a name for himself by creating absolutely unique cinematic experiences that delight in shocking and confounding audiences. Nearly all of his previous films eschew any kind of single narrative focus, instead utilizing a loose framing device as a method of exploring different themes and audacious miniature story ideas. With His Master's Voice, Pálfi takes a first stab at conventional storytelling, and it's tough to call it a complete success. His normal structure works well in his own anthology type films, but it feels very scattershot in service of this story, which requires a bit more focus.

In spite of arresting imagery and Pálfi's very visible fingerprints in what seems like it should be a match made in sci-fi heaven, His Master's Voice ends up as a mostly mixed bag. Not focused enough to work well as a single narrative, but not wild enough to work as an experience in avant-garde weirdness, His Master's Voice lands somewhere in the middle. Fans of either Lem or Pálfi will likely feel a bit of disappointment in the end result, and those who know neither's work are bound to be even more confused.