Busan 2019 Review: THE EDUCATION, A Life Lesson on Human Nature

In The Education, a young woman develops an unlikely relationship with a teenager when she is hired to take care of his severely disabled mother.

One of three Korean features in the Busan International Film Festival’s New Currents competition section, director Kim Duk-joong’s debut is a cesspool of fascinating emotions that simmer deep beneath the mundane extremities of everyday life. With its two leads sweeping the festival’s actor and actress of the year awards, The Education is a raw and stripped-down examination of human nature, though the excessively scant and slow storytelling could be challenging for most to sit through. However, patient viewers willing to scrutinise between the lines will be rewarded with a powerful, explosive climax that lingers long past the credits.

Sung-hee (Mun Hye-in) works part-time as a personal assistant for the disabled, in order to save up for a move to Spain after graduation. After injuring her back while taking care of a client, she requests for an easy daytime job with minimal physical labour. Sung-hee is then assigned to teenager Hyun-mok’s (Kim Jun-hyung) house to tend to his severely disabled mother in the day when he’s out at school.

The two individuals get off to a prickly start – Hyun-mok expects Sung-hee to take on additional housekeeping duties, which the latter believes is not in her job scope as a personal assistant. Overtime, however, the two reach an unconscious understanding of where they stand in their working relationship. This evolves into something more personal when Sung-hee offers to help Hyun-mok study for his impending civil service exam, which she had failed numerous times in the past.

The Education is an imperceptible film. Director Kim follows his characters on their banal day-to-day activities from a distance; they go on outdoor picnics together to study, with Hyun-mok’s mother in tow. Any form of drama is dispassionately played down (to the point of being comical), such as when Sung-hee and Hyun-mok believe his mother to be dead after she chokes on her food. Both characters do not say much when they are together. Yet along the film we see progressive shifts in their behaviour; shifts so slight and subtle that if you blink once, you’d miss the telling social cues that speak volumes about how these characters feel inside, and what they desire.

Small incidents occur in the film that appear inconsequential on the surface, yet each occupy a certain significance in the overall picture. There’s a scene when Hyun-mok heads out to buy potatoes, but later calls Sung-hee on the pretext of an emergency and requests her to carry his mother down to the store. After the shopkeeper sees Hyun-mok’s mother and verifies her identity, Hyun-mok leaves the store with Sung-hee. What happens here exactly is only implied, and director Kim leaves it to the audience to catch onto his trail of breadcrumbs. The audience needs to work hard to reconcile the new clues they see onscreen each time with what they presume they already know about each character.

Contrary to its title, The Education does not intend to be didactic. The film has something to say about the pressures of the South Korean education system, of social inequality, of the mental and physical exhaustion sustained from caring for the disabled. But it does not teach anyone how to solve their problems, neither does it pass judgment on its two central characters, who are flawed, selfish and barely likeable. Among them Hyun-mok is the more sympathetic one, a naive teenager starved for attention and affection who has been left to care for his mother alone. After Sung-hee enters his life, gestures such as a tiny smile or an evasive glance towards her direction betray his outward nonchalance – and Sung-hee sees right through him.

The older Sung-hee, in comparison, is more unreadable. Brusque and dour, she’s hardly a typical choice for a caregiving role, merely getting by her daily duties by doing the bare minimum expected of her. But a moment of vulnerability near the film’s denouement reveals that she may not be as far removed from her clients’ welfare as originally presented. And so the lines between emotional detachment and compassion remain blurred, in an intensely startling ending that spills over into the cluttered squalor of Hyun-mok’s dingy apartment. 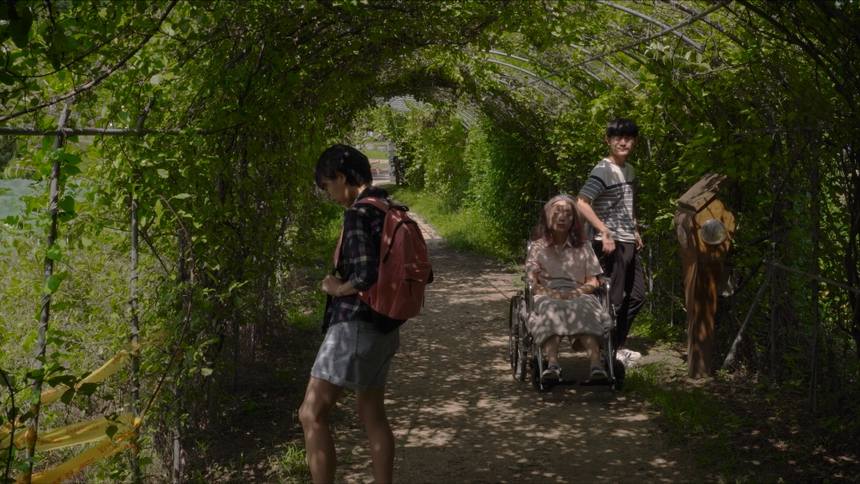 Do you feel this content is inappropriate or infringes upon your rights? Click here to report it, or see our DMCA policy.
BIFF 2019Busan 2019Busan International Film FestivalKim Duk-joongKim Jun-hyungMun Hye-inSouth KoreaThe Education