Brooklyn Horror 2019 Review: THE YELLOW NIGHT, A Trip To A Dark Future 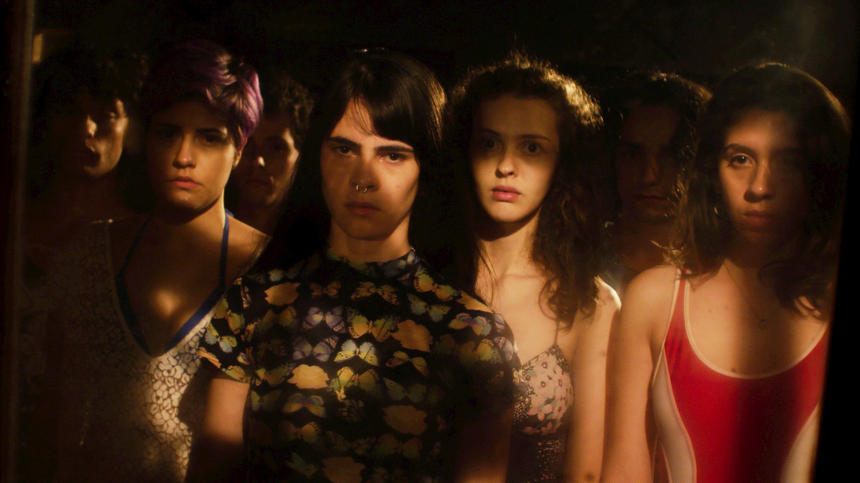 Brazillian horror has become noticeable in recent years among fans of the genre who have ventured into that particular landscape, where one can find everything from creature features to giallos to slashers and beyond. It's a rich terrain for experimentation and provocations.

It all feeds off the legacy of Coffin Joe, the classic horror figure from the 1960s. Those films made everyone uncomfortable and provoked strong reactions to a society that was getting stale in its extreme conservative status.

Now, things have changed, Brazil has turned once again to that extreme conservative control -- banning of books and comics that depict homosexual relations, closing of cinema funds, militarization of the cinematheque, among others -- and this might be among the first horror films to react to that ambience, by showing us the horror of a youth that doesn't know where to go: horror vacui.

The film opens and works with the premise of horror films in the mind of the viewer, and most of the first act repeats, beat by beat, elements of classics from the 80s, particularly The Evil Dead. Here, though, it's covered with elements that make it feel original and new. It also shows us the new generation of teens, who've just come out of their SATs to spend a well-deserved vacation on an island that seems only to be populated by them.

These teenagers take selfies, pictures, search constantly for internet signals and reminisce about earlier parties and happenings at their school as they drink, settle and prepare to dance. Underneath all of that, this group of teenagers encounters a series of elements that call to attention the genre elements that might appear later: a videotape with a discussion on time travel, a rusty door that leads to darkness, and blackouts, among others.

Then the film makes a turn; when the characters sleep, we see the dream one of them has: a repetition of something that happened just before they left for the island. The girls hop on a borrowed car on their way to a disco to celebrate, but they stop at a gas station, where various cars are parked. and party around their particular sound systems. They get into a confrontation regarding the volume of the music and we feel the tension among the youth, trying to assert themselves in a violent context of intolerance.

The third act follows a more horrific turn, by returning to the present, when the abandoned town in which they are in seems to slowly be devoured by darkness. This film might not seem to fully enter the realms of horror by showing us lots of blood, violence or monsters, but it slowly builds the dread that envelops the characters, and as their despair becomes apparent, so does the film work towards this beautifully dark imagery, which congratulates the viewer on the patience it had for sticking with this disjointed story.

If anything, it reminded me of The World Is Full of Secrets, directed by Graham Swon, which also deals with the horrors of emptyness in life when it comes to the lives of teenagers confronted with the idea or the history of violence that came before them, or that's continually being thrown at their faces by the world in which they live.

Do you feel this content is inappropriate or infringes upon your rights? Click here to report it, or see our DMCA policy.
BrazilBrooklyn Horror 2019Felipe EspindolaMarina AlencarRamon Porto MotaServílio de Holanda