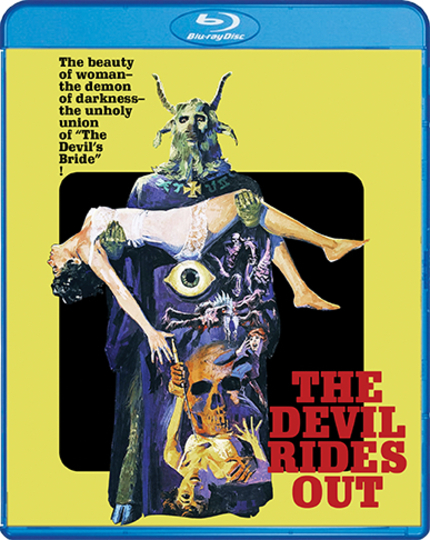 Terence Fisher directs legend Christopher Lee (and others, of course), who stars as the posh and dominant busybody Duc de Richleau, who finds that a friend's son is hanging out with the upper crust of devil worshipers. Duc, along with an old chum, goes on an adventure to save this young man and another young woman not just from themselves, but from the devil himself!

The Satanic cult is lead by the icy Mocata (the excellent Charles Gray) who has a knack for villianous turns and telepathy, and some pretty mad parties, to be honest. I mean, what kind of villian are you if you can't throw a rockin' soiree?

There are twists and turns as Duc and friend fight for their friends' safety and souls, and also, I would be remiss in my reviewing duties if I didn't mention that this film has chickens. Somehow, the presence of chickens always means a fun time, and if we're very lucky, a good film.

I have to say that The Devil Rides Out is a fun time, mostly. It's dated, but done in good Hammer fun, with lush costumes, colors, and visuals. A movie such as The Devil Rides Out isn't meant to be taken seriously, and plots like the one here --- supernatural roller coaster --- are less about what happens than how it happens.

The film looks fantastic and sounds great. Scream Factory has done a terrific job here with the new 2K scan, and I really enjoyed hearing more about the folk horror aspects of the story from film historian Jonathan Rigby.

There's also a great featurette about the adapations of Dennis Wheatley. I haven't been able to dig into any of the commentary tracks yet, but I imagine they're interesting, especially the old one with Christopher Lee.

Lots of good stuff here, and it's always awesome to hear the late, great Oliver Reed (he starred in a few of the earlier Hammer films) narrate a "World of Hammer" episode, no matter what the theme is.

If you need to grab The Devil Rides Out for your home Blu-ray collection, head over to Scream Factory's site here.

The Devil Rides Out