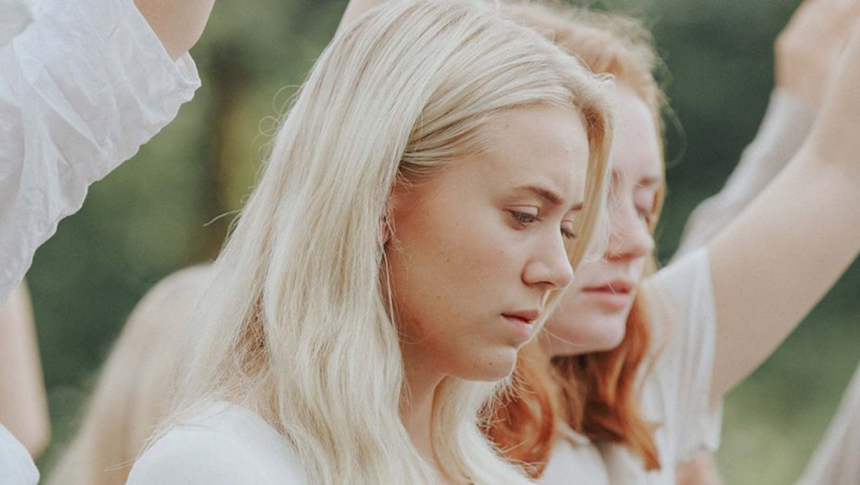 Disco is a juxtaposition of cults.

One is the intense dance competition circuit. Here, girls in skimpy, sparkling outfits, a deluge of rhinestones and sequins, with face paint to match, perform intensely choreographed contortions to thumping electronica as an expression of their flexible youth. The other is a hip evangelical church called The Freedom, which uses wall-sized flatscreens, laser light shows and high energy Christian pop-rock to preach the gospel.

Mirjam straddles both these worlds as a bright shining star. A seven-time national champion on the circuit, there is a room in her mother's house that is like a library of gaudy trophies. When she is told to smile, it is not an offensive imposition, it is merely the oxygen she breathes. Her eyes barely follow suit. Ditto at The Freedom, where her step-dad is the star preacher, and she the lead performer in the many ultra-produced stage shows and videos that precede his sermon.

When not performing the public perfect life at the church, her parents marriage is crumbling over money. Their picturesque middle-class home, with its big kitchen and airy layout is the space for heated arguments. When Mirjam starts to stumble on the dance floor, in an escalating series of competitive mishaps, it sets off another crisis in her household.

Disco could easily have been an American story, or the product of any wealthy Western nation, but this is a Norwegian film. And Norway takes its dance competitions and evangelism to a level every bit as 'psychotic' as the US of A.

Director Jorunn Myklebust Syversen confidently captures the energy and emptiness of Mirjam's two 'professional' worlds, but it is her lingering on the personal, private one where the film shines. Shots on Josefine Frida Pettersen's face linger a moment longer than is comfortable. As Mirjam spirals downward under the pressures of an empty domestic existence, there are hints of early childhood trauma that everyone in the household seems happy to keep buried. Her only friends are her family and her church. When asked at one point if she believes in God, she answers, "I have to."

Mirjam turns to other cultish branches of Christianity. A crisis of faith becomes more of a shopping experience, because she is too far encapsulated in the Christian cocoon to see anything outside it. One option is her uncle's mega-church, one of those 'have your credit cards ready' kind of operations. Her mother is ready to run back to her brother for a quick financial fix.

Another is a more acetic, and far more conservative, branch that has been canvassing The Freedom with the possible motive of trying to poach members. Mirjam complies. Quiet choirs in close quarters, and study groups done in Last Supper tableaux, indicate that things here are as nutty and showy as the other two sects, just in its own, minimal way. It is also one that triples down on anxieties, apprehensions and fears to cleanse in the name of Jesus. Albeit, I suppose they all do.

The last act of the film sees Mirjam go on a wilderness retreat with the latter group. And things go headlong into Jesus Camp territory. Students of recent history may also note subtle evocations of the Utøya Island mass shootings of 2011. It's a dance of another sort, halfway between a baptism and waterboarding.

Cinematographer Marius Matzow Gulbrandsen, who shot the gothic modern fairy tale, Valley Of Shadows, another surprise discovery from Norway in 2017, glides between lighting styles to underscore each of Mirjam's worlds: frantic and kinetic key lighting on the competition sequences, pinks and teals in The Freedom church 'fashion show' and her home performative existence (there are shades of Nicolas Winding Refn's The Neon Demon here), and a misty natural light with handheld propulsion in the final act. It is assured filmmaking in service to the purpose and tone and narrative.

It is an old saw in advertising, the pitchman spends their time and energy selling the problem, and merely presents what is for sale as a solution. Oh, and get them while they are young. This is equally applied to religion and sports, or whatever bubble one chooses to live in. Disco does not leave the audience with any answers. The story heightens what is already out there. My audience in progressive, secular, Toronto had many strong (verbal) reactions to how the film depicts what has been brewing in the pop culture sensibility of the modern world in recent years, both gaudy consumer culture and mirror new age alternatives, which are also commodified.

It does what a good drama (or horror) film should do, it allows the audience to consider its own value systems in its empathy of the main character, and the situation she finds herself in. Disco does so with a different kind of poise and grace.

Do you feel this content is inappropriate or infringes upon your rights? Click here to report it, or see our DMCA policy.
CultsDiscoJesusJorunn Myklebust SyversenJosefine Frida PettersenNorwayTiffToronto 2019