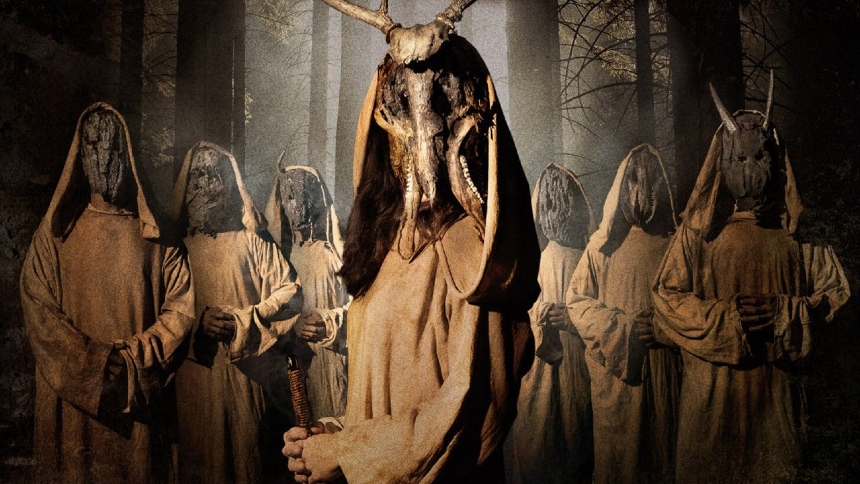 Just when she thought she was out, she was pulled back in.

The Heretics
Now streaming on Netflix.

Gloria suffers from a horrifying nightmare. It's not a psychedelic trip of jumbled images that invade her unconcious, however.

Instead, it's a very specific memory that has scarred her psyche, a time at night when she was tied up in the woods, surrounded by a group of people wearing hoods. Gloria was helpless as the torch-bearing people did something terrible ... to themselves.

That nightmare from years before has made life troublesome for Gloria (Nina Kiri), who, nonetheless, feels like she's making progress in her recovery, with the help of her supportive girlfriend Joan (Jorja Cadence). Everything comes tumbling down, though, when Gloria is kidnapped by a quiet stranger named Thomas, for reasons that are not immediately revealed.

The Heretics caught the attention of our own Andrew Mack when the film enjoyed its world premiere at the Canadian Film Fest in Toronto in 2017. In his review, he wrote in part:

"With each passing film Chad Archibald continues to display growth as a director. He has proven himself able to work within the confines of the low budget structure and make a film that does not look it. Archibald has always, in my mind, had no issue creating striking visuals. ... Archibald gets good performances out his leads.

"Ry Barrett, for years a familiar face in Ontario's horror scene, is reliable and solid as we have come to expect. ... I feel that the real standout of the lead trio is Jorja Cadence. ... I still think that The Heretics is his best work to date. With a familiar narrative he still manages a couple surprises to keep it interesting. His cast contains a reliable stalwart and lets us know that there are a couple of femme fatales emerging on the horizon."

At times, The Heretics is grueling and somewhat messy. Also, I agree with my friend and colleague that there are concerns here about the agency of one of the lead female characters, or, rather, lack of agency, as he explains in his review. Even so, the film plays well on the small screen, the striking imagery punching through the tropes to leave an impact.

Summing up: Nicely tailored for fans of dark, independent horror.

Do you feel this content is inappropriate or infringes upon your rights? Click here to report it, or see our DMCA policy.
Chad ArchibaldJorja CadenceNina KiriRy Barrett

More about The Heretics