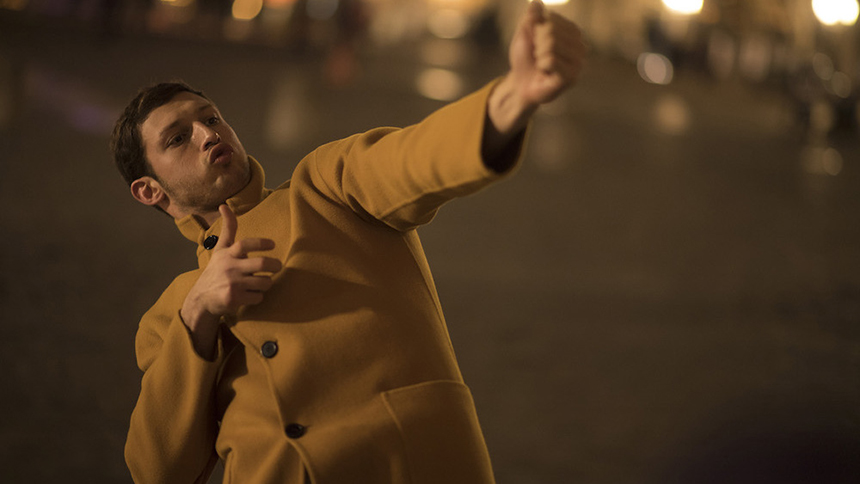 Yoav (Tom Mercier), a young Israeli man, is first seen with spitting out words and their synonyms, like a broken automated dictionary, in French, which is obviously not his native tongue.

He arrives in a posh part of Paris, gets all of his meager belongings stolen in a flash, including clothes and a sleeping bag that he just laid out on the floor, in a large empty apartment. And there is no hot water. He passes out from exhaustion and hypothermia.

His young neighbors, Emile (Quentin Dolmaire of Anaud Desplechin's My Golden Days) and Caroline (Louise Chevillote), find him and revive him. They are almost parody of what 'a Parisian couple' is like - Emile is a writer who is forever working on a book titled, "Night of Inertia" and sexually ambiguous, coquettish Caroline plays oboe in an orchestra in her spare time. Emile, fascinated by this hunky, naked young foreigner, gives him clothes, a cellphone and wads of cash.

Soon Yoav moves into a squalid apartment across the river, still keeping contact with the young couple. He is an angry young man who is running away from home and refuses to speak Hebrew. He describes Israel as Ignorant, mean-spirited and crude. He is fit and has strict daily regimen for survival. He is listless, directionless and tactless. He gets a job as a security detail at the Israeli consulate. There he befriends with a typical macho soldier type, Yaron (Uria Hayik), who describe France as a hornet's nest for terrorists. Yaron forcefully asserts his Jewishness everywhere he goes by shouting "I am Jewish!" and humming Israeli national anthem loudly in a crowded subway to Parisians who could care less.

With his good physique and boyish good looks, Yoav gets involved in the art project by some pervert French photographer who tells him to penetrate himself while naked spread eagle on the floor, yelling in faux ecstasy in Hebrew. He feeds stories from his military service to impressionable Emile, telling him that he can have all of his stories as if he can truly hand over his former life to someone. He gets involved with Caroline even though whose high culture antics doesn't sit well with him. The flashback from his military service plays out, accented with absurd moments like dancing soldiers serenading a pop song during a military honor awarding ceremony.

Synonyms can be a difficult film: it can be seen as rudderless and abrasive. Sense of irony dominates the film as Yoav struggles with his identity. It's packed with dueling exaggerated visions of perverted and uncaring Europe (France in particular) and the uber military culture the director Nadav Lapid grew up with.

The film concludes, as Yoav trying to open the door by slamming his body against it, you can't escape where you came from and the gap between the world you are trying to assimilate remains shut closed. But the film works, thanks largely to Tom mercier's physical as well as verbal, at times verging on slapstick level on both counts. The film is often hilarious and at times poignant and filled with manic energy. Shai Goldman's handheld camera work is aces also.

Do you feel this content is inappropriate or infringes upon your rights? Click here to report it, or see our DMCA policy.
FranceIsraelLouise ChevillotteNadav LapidNew York Film Festival 2019Quentin DolmaireTom Mercier