In the Shadow of Christopher Lee's house..... 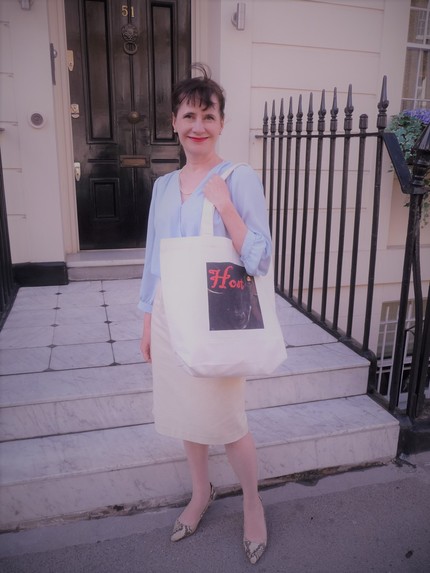 It is a quiet, end of summer afternoon in London's Belgravia and I am standing outside the childhood home of Sir Christopher Lee at 51 Lower Belgrave St.  The building is very elegant but perhaps appropriately for Hammer Horror's  Prince of Darkness, on the dark side of the street and I shiver a little.  It is always hard to believe a film star has passed away as their screen life never does.  With his beautiful, gravelly voice, distinguished face and wonderful screen persona, Christopher Lee is one of my favourite actors and I had always intended to visit here.

So why now?  Well I am an actor myself getting ready to shoot my next horror feature film 'Host' from the awesome horror director Ray Brady of UK Film Co and I am doing all I can to immerse myself in the genre and bring attention to our Indiegogo.  This is the first crowdfund I have played a big part in and my goodness it's not easy!  Happily we now have 50 investors and things are really turning around.

For some reason I have often been cast in films about or touching the supernatural.  This began when I was 16 and played David Tennant's sister (yes, that David Tennant) in 'The Secret of Croftmore' at Scottish Television.  I played both a contemporary teenage girl and a ghost of her ancestor during the Highland Clearances a hundred years before.  At that time it was so exciting to have a role on TV.  David was very conscientious and a really good guy - of course we had no idea what lay ahead!  My first feature film 'The Gospel According to Vic' was about a Special needs teacher (played by Tom Conti) who performs miracles - or does he?  Many years after I returned to acting after a break, my first big job was in the horror feature 'Death of the Virgin' starring Maria Grazia Cucinotta from 'Il Postino'.  This was filmed on location in Italy and if you like films about covens and demons this is for you!  I played a very vulnerable girl that the main family of the film had adopted and made into an unpaid servant.  It was a really wonderful opportunity.

Horror remains one of the most popular cinematic genres perhaps because we can vicariously live through so many horrendous  scenarios without really being there, like a rollercoaster but far more interesting.  My new film 'Host' is set in an Airbnb.  The main characters of the film decide to rent out a room in their home for some extra cash and find it was the worst decision of their lives.  We are always vulnerable when we stay in a new place so it is a perfect setting for horror.  But who will come into the house and what will happen?  To find out you will need to watch 'Host' when it comes out in 2020.  We are just getting ready to start shooting.  If you would like to contribute to our Indiegogo you can find the link here  https://www.indiegogo.com/projects/host-horror-feature-of-demonic-empowerment#/  or visit our website Http://hostmovie.co.uk  Thank you for reading!

Do you feel this content is inappropriate or infringes upon your rights? Click here to report it, or see our DMCA policy.
HammerHorrorfan newindiehorrorfilm RayBrady KateSandison