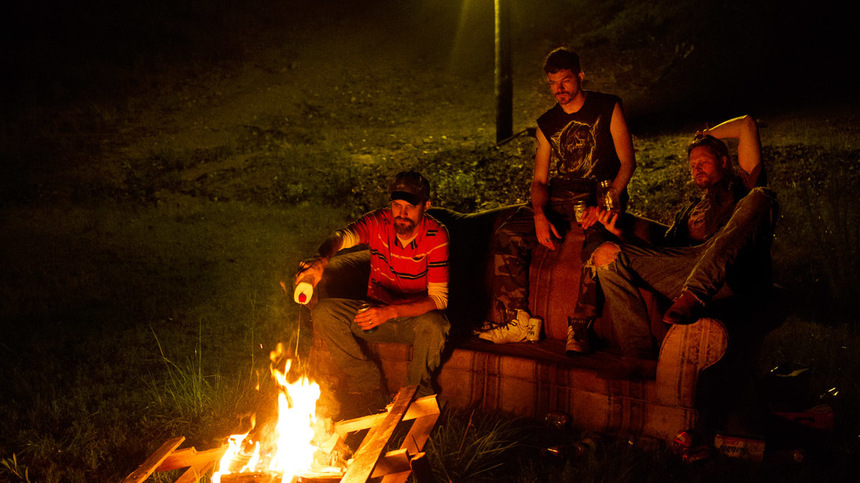 When a filmmaker's breakout debut is a movie about a guy who finds and befriends a flatulent corpse, you know there are a few screws loose upstairs. Director Daniel Scheinert was one of the two Daniels responsible for 2016's divisive Sundance film, Swiss Army Man, in which Paul Dano and the corpse of Daniel Radcliffe form the above-mentioned bond. Scheinert is back with his solo directing debut in The Death of Dick Long, an equally oddball entry in a filmography that has very quickly become worthy of notice.

The place, rural Alabama, a location that on its own merits exudes an air of intellectual simplicity and backwards morality. The people, a trio of well-meaning but dopey hillbillies, wholesomely noodling around with their garage-bound Nickleback cover band, looking for a good time at the most reasonable possible price. The problem, after a night of typical backwoods debauchery, one of them ends up dead, and the other two are racing to distance themselves from the tragedy while also attempting to maintain an air of innocence, rather unsuccessfully.

When Zeke (Michael Abbott, Jr.) and Earl (Andre Hyland) hurriedly drop the mortally wounded body of their friend Dick Long on the pavement in front of the local ER, they think they've steered clear of danger. However, soon enough they begin to realize they aren't the masterminds they thought they were, and they scramble to iron out the wrinkles in their stories, all the while hoping to maintain an impossible stasis in their homes.

The first feature written by Billy Chew, The Death of Dick Long is a black-as-pitch comedy with a surprisingly big heart that has instantly entered my list of favorites of the year. Chew and Scheinert tell a story of a few good men who entangle themselves in a few unfortunate acts, and have a really, really hard time finding a way out of this trap of their own making.

Set in rural Alabama, Dick Long takes full advantage of its rural milieu, utilizing the desolate sameness of its country backdrop to leave its characters high and dry when they look for places to hide. While it would be easy - very easy - to poke fun at these two men by making them caricatures of Southern ignorance, Dick Long doesn't take the low road and instead creates a pair of well-developed, if somewhat simple, men who simply find themselves out of their depth.

The Death of Dick Long, by placing itself in rural Alabama, gives itself a huge target for mockery in terms of characters with limited worldviews and exaggerated Southern drawls. It never chooses to take the low road, however, instead crafting a surprisingly empathetic vision of two men desperate to maintain some semblance of normalcy after a decidedly weird turn of events claims the life of their best friend. To tell you more would constitute a monumental spoiler, but trust me when I say you won't see it coming.

Leading the charge is Michael Abbott, Jr. as Zeke, a family man who loves his wife and daughter and wants nothing more than to protect them from his own transgressions. Abbott is amazing in the role, just smart enough to almost evade detection, but at the same time, dopey enough that he proves to be among the world's worst liars. On his and Earl's trail is a pair of unlikely small town police in 'I'm-too-old-for-this-shit' Sheriff Spenser (Janelle Cochrane), and her plucky sidekick Officer Dudley (Sarah Baker, memorable from her astonishing moment on Louie CK's show, Louie), the former of whom seeks nothing more than for this death to go away, while the latter won't rest until the case is solved.

Meanwhile, apart from Zeke's tortured travails with his own wife and child, Andre Hyland's Earl is the Barney Rubble of the crew. Not exactly an innocent, but not quite smart enough to mastermind anything, Earl stumbles through life with people more of less thinking he's too dumb to ever get away with anything. And for the most part they're right. Hyland's performance is a masterpiece of perfectly pitched comic genius, another unexpectedly empathetic look at a man without much to call his own and therefore not much to lose. Whenever Dick Long gets too serious, which happens from time to time, we cut back to Earl's antics and the equilibrium returns.

You have no idea how much I wish I could discuss the insane turns The Death of Dick Long takes along the way, but that would be cruel and most certainly unusual. Suffice it to say, the death is sad, tragic, violent, and brutally hilarious, and the lengths to which Zeke and Earl go to evade detection are dumb, short-sighted, and equally hilarious. The Death of Dick Long is one of the year's funniest films, and I can't wait to see it again with an unsuspecting crowd.

Do you feel this content is inappropriate or infringes upon your rights? Click here to report it, or see our DMCA policy.
Andre HylandDaniel ScheinertFantastic Fest 2019Michael Abbott Jr