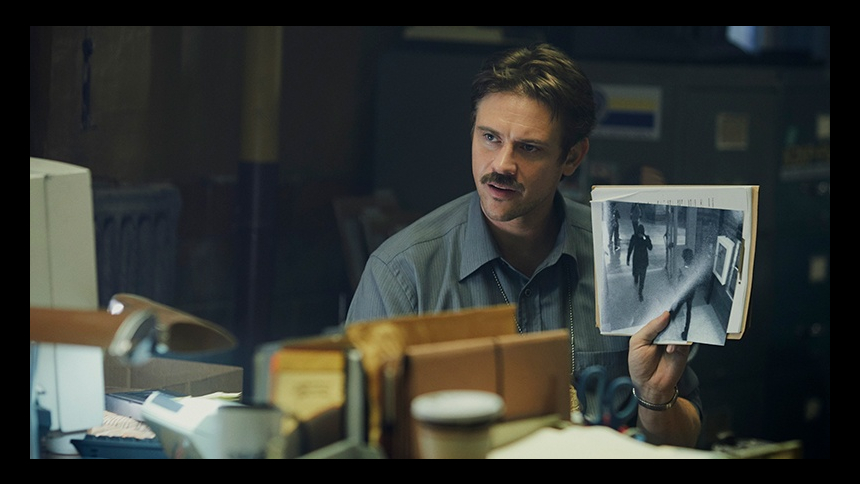 Introducing his latest film, In the Shadow of the Moon, director Jim Mickle acknowledged that a conversation about the collision of streaming services and the theatrical experience deserves to be heard. He also pointed out, however, that Netflix deserves credit for their willingness to acquire and showcase films that otherwise might not be made.

Then a large crowd of genre fans drank a free can of beer supplied by Netflix and watched a movie that deserves to be seen on the big screen.

The night before, Vincenzo Natali introduced his latest thriller, In the Tall Grass, based on a story by Stephen King and Joe Hill, to a receptive audience. (In addition to a free can of beer, Netflix also offered attendees a complimentary hardcover copy of Hill's new book of short stories. Full disclosure: I accepted both.)

One night later, Brad Anderson introduced his latest mind-twister, Fractured, followed by a seperate "secret screening" of Craig Brewer's bawdy, free-spirited comedy Dolemite Is My Name, starring Eddie Murphy as entertainer Rudy Ray Moore. Free cans of beer were also offered at these screenings to attendees, while anyone could walk into the lobby and buy a copy of the original Dolemite (1975), available on Blu-ray from the invaluable Vinegar Syndrome. (They have tables set up with their fabulous releases; also available online.)

All four movies benefited from the theatrical experience. Both In the Shadow of the Moon and Fractured beg to be seen again as soon as possible, in part to luxuriate in the intricate mysteries that are raised. Both In the Tall Grass and Dolemite Is My Name beg to be seen again with appreciative audiences; the former for its execution of an outlandish premise, and the latter for its excellent performances and crowd-pleasing comic rowdiness.

Irony runs rampant in the idea that a streaming service would offer free cans of beer to reward film festival attendees who choose to see movies that won't actually be receiving theatrical releases. (Note: the exception is Dolemite Is My Name, which will receive a limited theatrical release.) For myself, I very much wanted to see the latest works by directors whose previous films I have very much enjoyed.

Experiencing Mike Flanagan's Hush on a big Alamo Drafthouse screen with booming sound during SXSW in 2016 opened my eyes to the 'streaming vs. theatrical' battle, despite my reservations about the film itself. Indeed, of the four films I've seen at Fantastic Fest that will shortly be debuting on Netflix, I can readily understand why each of them might have experienced challenges in gaining distribution and/or reaching wider audiences.

To be frank, I've seen more movies on streaming services this summer than I've seen in theaters, which is a definite change for me. My own tastes and preferences have driven me further away from mainstream wide releases, and it's very challenging to see every intriguing, limited-release title in a theater, given their limited theatrical runs.

I love discovering strange and weird movies from around the world on the big screen. That will always remain my preference. But I'm very glad to have excellent home-video distributors and streaming services to help me see most everything I want to see, including the latest creative works by directors I admire.

In the Shadow of the Moon
The film enjoyed its world premiere at Fantastic Fest in Austin, Texas. It will begin streaming on Netflix on September 27, 2019.

In the Tall Grass
The film enjoyed its world premiere at Fantastic Fest in Austin, Texas. It will begin streaming on Netflix on October 4, 2019.

Fractured
The film enjoyed its world premiere at Fantastic Fest in Austin, Texas. It will begin streaming on Netflix on October 11, 2019.

Dolemite Is My Name
The film enjoyed its Texas premiere at Fantastic Fest in Austin, Texas. It will begin streaming on Netflix later this year, and will also receive a limited theatrical release.

Do you feel this content is inappropriate or infringes upon your rights? Click here to report it, or see our DMCA policy.
Brad AndersonFantastic Fest 2019Jim MickleNetflixVincenzo Natali

More about Dolemite is my Name