Review: In HUSH, A Deaf Woman Is Stalked By A Silent, Murderous Man 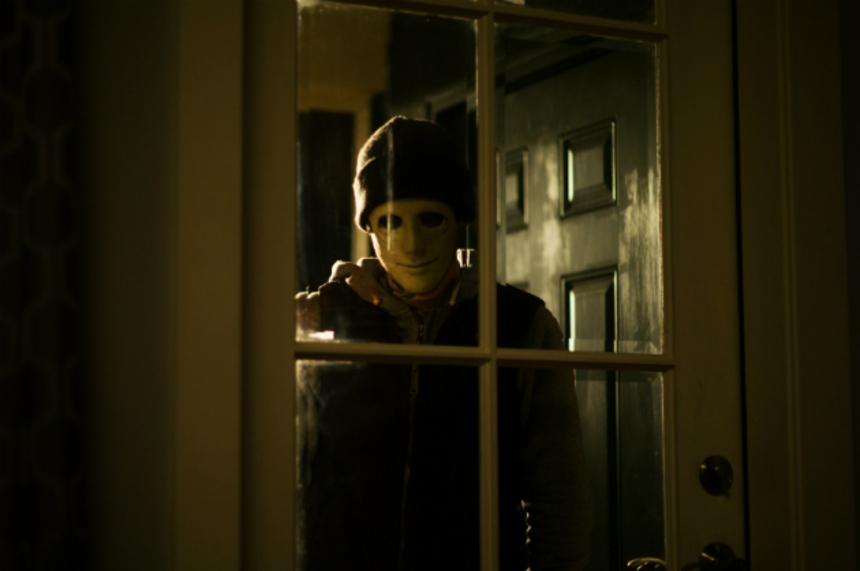 Exciting, tense, and stylish, Hush plays like the extended third act of an 80s slasher movie. That's both good and bad.

On the good side, the nostalgia factor is strong with this one. The setup is simple: a deaf woman named Maddie (Kate Siegel) lives alone in a remote location. One night, a masked man (John Gallagher Jr.) appears at her doorstep, determined to kill her.

The original screenplay by Mike Flanagan and Kate Siegel races onward from there. Complications arise, among them the multitude of challenges that arise from trying to breach a two-story house that has been well-secured by its wary occupant, and the action becomes appropriately more jagged, violent, and bloody.

As might be expected from a script cowritten by its star, Hush paints an altogether heroic portrait of Maddie, yet delves sufficiently into the character's fears and shortcomings to make a living, breathing person out of her. Maddie lost her hearing and her ability to speak as a youngster due to illness. That hasn't stopped her from carving out success as a novelist, which has enabled her to buy a home deep in the woods.

It might appear to be a big house for a single person, yet Maddie feels entirely secure in her isolation. (She's not the type to be pining away for a relationship or a family to make her life feel worthwhile.) She needs to start cracking on her next book, but is experiencing Blank Page Syndrome, familiar to any writer. Maddie may not be the strongest physical specimen around, but her intelligence, independence, and adaptability give her a leg up when Mr. Mysterious Masked Killer comes knocking. Mike Flanagan has been directing movies and TV shows for years, but it was the sneaky success of Oculus that made him pop on the horror front. His direction here makes excellent use of the setting, and his editing keeps the pace relentless.

To be fair, it's not unusual for a horror movie or thriller to be centered around a single house, but Flanagan and his key collaborators, including cinematographer James Kniest and production designer Elizabeth Boller, give the modern home a sleek and fashionable look, which is both a reflection of Maddie's tidy personality and possibly a peek into what drives the masked killer to want to destroy it.

Siegel and Flanagan may have tailored the script to fit Siegel's abilities as an actress and, if so, it's a complete success. Even without speaking, Siegel communicates a convincing range as a woman who is being tested emotionally, physically, and intellectually to the nth degree.

Whenever the camera alights on her face, we know what she's thinking. Gallagher, as the masked killer, is restricted to a far more limited degree of emotions, but essays the role as required.

That leads to the bad side of the equation, though, which is why?

'The killer kills because he is a killer' was more than enough to satisfy audiences for slasher movies in the 1980s. In those days, viewers of such things were mostly young and male, including myself, and mostly not terribly enlightened; we were not surprised that the women in slasher movies such as the Friday the 13th series were stalked and/or killed when they were most vulnerable, often naked and/or having sex. We expected 'the final girl' to be virginal and also innocent, yet capable of vanquishing the killer through an unexpected act of valiant strength and/or chance.

Some 30 years later, horror audiences have become more diversified and demand more from the characters and from the filmmakers. In Hush, Maddie may not be the prototypical 'final girl' -- the script has eliminated all the 'kill a gang of kids one by one' scenarios -- but she's defined well as a strong, and definitely not superhuman, person.

On the flip side, though, the masked killer is pretty much someone who's been copied from those slasher movies, albeit looking much more like an ordinary character than Jason or Freddy or other serial killers. His motives, however, remain hidden, even as his brutality toward his victims becomes more and more vicious. He's not the type of killer to do his business as quickly as possible; instead he's someone who enjoys the process of torturing his victims and prolonging the misery for as long as possible.

That made Hush progressively more difficult for me to watch, and more difficult to dismiss as a simple thriller out to entertain an audience. The intentions lean the movie more toward the nasty side of the sliding horror scale of serial-killer behavior and perhaps that's why it left me queasy.

It's not the explicitness of the violence; it's the thoughts behind the extended brutality of the killer against his intended victim. If that was the intention of the filmmakers, then Hush is a roaring success.

The movie will be available to watch on Netflix starting on Friday, April 8. I'll add that it looked and sounded truly spectacular at an Alamo Drafthouse theater during SXSW, which is where I saw it last month, and it's a shame that it's not receiving a theatrical release, at least in the U.S.

Do you feel this content is inappropriate or infringes upon your rights? Click here to report it, or see our DMCA policy.
John Gallagher JrKate SiegelMichael TruccoMike FlanaganSamantha Sloyan