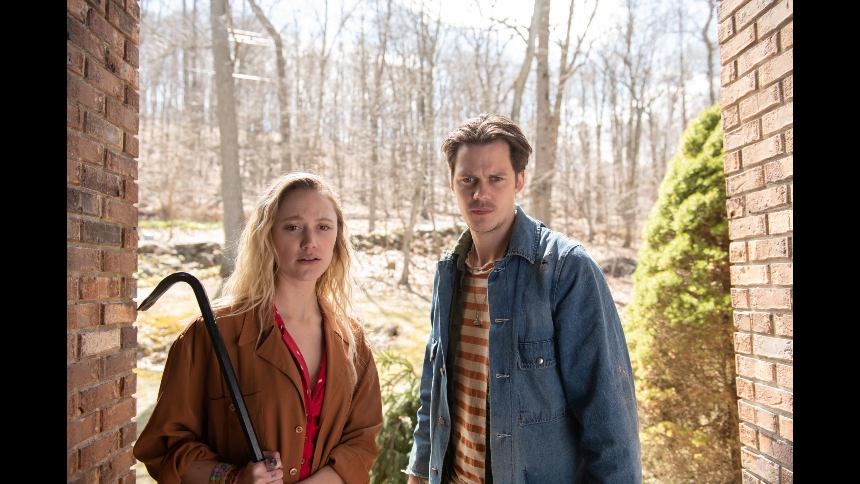 What happens when horror meets the mainstream? Much, much laughter.

Mickey and Jules are lovable dopes. They pull off a small-time theft and imagine they are headed for the big time or, at least, a new life in a new place. Then they run out of gas on a lonely stretch of road. Inevitably, they end up in a beautiful home with a ghastly secret.

Surprisingly, this is all played for laughs in the hands of Dan Berk and Robert Olsen, who collaborated on the original screenplay and directed. Their previous directorial effort, The Stakelander (2016), based on Nick Damici's fine script, was a dark and brutal thriller. Before that, the duo wrote and directed Body (2015), which Anton Bitel at Projected Figures says "married the edgy sexual reversals of Wild Thing (1998) and the life-and-death struggles of Stuck (2007) into a Christmas cracker."

All this is to say, I expected Villains to be a home-invasion horror film, not a crackerjack comedy with dark edgings.

As Mickey and Jules, Bill Skarsgård and Maika Monroe demonstrate their range of talent. Though both may be best known for their horror roles (Skarsgård as Pennywise in It, as well as the small-screen Hemlock Grove; Monroe in It Follows), they nail the comic side of their characters here, while also radiating the intimacy, affection and concern befitting a devoted, loving couple. They are friends and lovers, and they will do anything to protect each other.

And protect each other they must, once they meet George (Jeffrey Donovan) and Gloria (Kyra Sedgwick). They appear to be a suburban couple who have stepped out of a promotional video, but appearances can be deceiving. In the past, both actors have shown their versatility and they impress once again with their dance between the lighter and darker (very dark) sides of their personalities.

Horror-comedies such as Villains are very much dependent on the lead characters, whether they engender empathy or manifest menace, and this quartet of actors -- not to forget young Blake Baumgartner, who handles her part quite well -- kept me entertained for the entire, and wisely brisk, running time.

* The source of the supposed quote is difficult to pin down

Do you feel this content is inappropriate or infringes upon your rights? Click here to report it, or see our DMCA policy.
Bill SkarsgårdDan BerkJeffrey DonovanKyra SedgwickMaika MonroePopcorn FrightsRobert Olsen