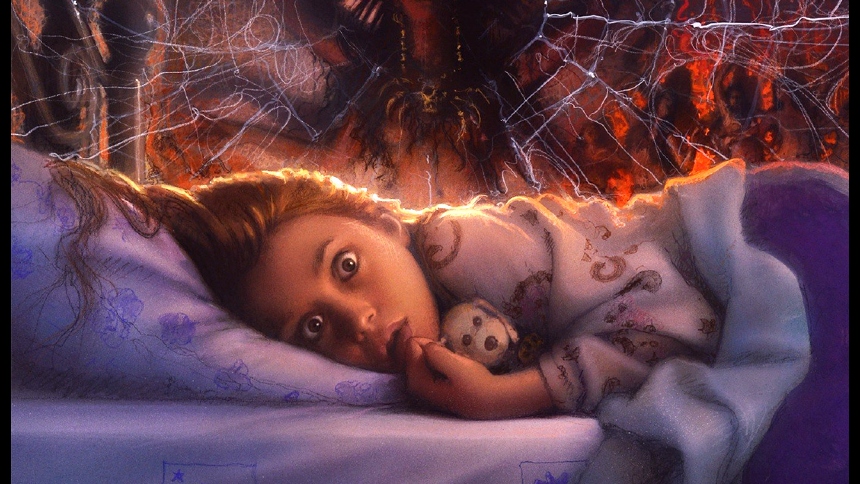 Something's not quite right, and it crawls on eight legs.

Itsy Bitsy
The film enjoyed its world premiere at Popcorn Frights Film Festival. It will open in select theaters and On Demand everywhere August 30 from Shout! Studios.

She has decided to move across the country to accept a new job, providing home health services to Walter Clark (Bruce Davison), who appraises a wide variety of objects. Walter is now limited in his mobility, but his mind remains sharp and intensely focused on a new, possibly rare and certainly valuable object that has come into his life.

Single mother Kara is mostly focused on not being focused on anything. She has immediate differences with Walter, and tends to leave her young son Jesse (Arman Darbo) in charge of her younger daughter Cambria (Chloe Perrin). On the cusp of adolescence, Jesse kicks back against her distracted authority; Cambria is fine, as long as she can exercise her innate curiosity.

It's easy enough to suspect the source of Kara's discomfort, anxiety, and unease. As far as Walter is concerned, however, he just wants a helping hand so he can continue to examine his latest object, which has come from a faraway place and from a source that intrigues him. Given the film's title, it's only natural for the viewer to assume that eight legs are somehow involved in the mystery.

Davison shot to fame for genre fans on the strength of his starring performance in Willard (1973) and he has always generated considerable empathy in whatever role he is portraying. That is true here, as well; Walter Clark's intentions are not entirely clear, but he is certainly a sympathetic figure. Denise Crosby is quite steady as the small town's sheriff and should be reassuring to everyone, and she too generates empathy.

On the other hand, Elizabeth Roberts must tackle a more complex character as Kara in a slow-burn, atmospheric picture that revolves around the increasing danger posed by some sort of eight-legged creature. In other words, there's not much time to establish any sort of backstory or immediate understanding of what she has experienced in the past that drove her to move her family such a distance. Sufficient hints are dropped, however, before we learn more about her situation, and we get a sense of why she is so quick to take action, thanks in large part to Roberts' nuanced performance.

In his feature debut, Micah Gallo directed from a script by himself, Jason Alvino and Bryan Dick. Gallo is also the visual effects producer, so the setups for the creature are well-considered and well-framed to maximize the effects, without sacrificing the tension that slowly builds.

Summing up: Taking a more serious, dramatic approach than other recent films in the sub-genre, Itsy Bitsy is a creature feature about a murderous giant spider that cares about its human characters. I found it eminently satisfying, and good fun to boot.

Popcorn Frights runs through August 16 in Fort Lauderdale, Florida, US. For more information about the festival, visit the official site.

Do you feel this content is inappropriate or infringes upon your rights? Click here to report it, or see our DMCA policy.
Bruce DavisonDenise CrosbyElizabeth RobertsMicah GalloPopcorn Frights