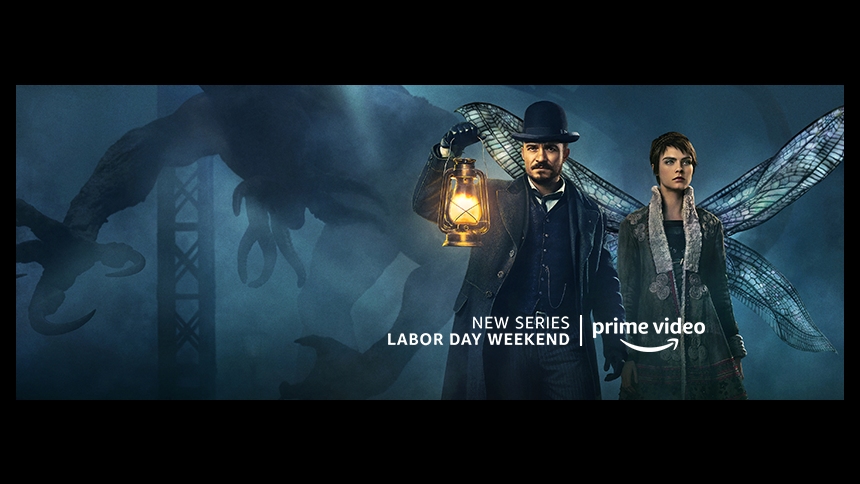 Steampunk gets a vigorous new mystery.

Carnival Row
All episodes streaming on Amazon Prime Video as of August 30, 2019.

It begins with murder and fae in flight.

The fae homeland has come under attack from the world of men, and it's a losing battle. Valiantly struggling to help her people, Vignette Stonemoss (Cara Delevingne) finally must concede defeat and seeks refuge on a ship sailing to The Burgue, a crowded country best described as a steampunk version of London in the late 19th century.

The sole survivor when the ship wrecks upon arrival, Vignette is pressed into unhappy indentured servitude by the authorities and is assigned to the ship's ostensibly wealthy owners, siblings Imogen (Tamzin Merchant) and Ezra (Andrew Gower). The siblings are losing their wealth, but Imogen holds out hope that prosperous new neighbor Agreus (David Gyasi) might be convinced to help them. Then she discovers he's a puck! A puck!

Police investigator Philo (Orlando Bloom), meanwhile, goes about his business as the sole voice of authority who is sympathetic towards the refugees who have flooded into the city. This includes the fae, who have wings like hummingbirds, and the pucks, who have horns and hooved feet.

In general, the fae and the pucks are treated contemptuously as fourth-class invaders by the men and women of different races who inhabit the upper ranks. The country's chancellor, willowy Breakspear (Jared Harris), advocates a different course, as does his scheming wife Piety (Indira Varma) and his feckless son Jonah (Arty Froushan).

By the end of the first episode, nearly all the primary characters have been introduced and the plot is set in motion. It hinges on a case of serial murders that may all be connected and threaten to expose all the secrets the characters are desperately hiding.

The murderous spree is the major thread that ties all the characters together, yet the overriding theme of the series is the world's treatment of refugees. Undisguised discrimination and outright hatred flow freely from the hearts and mouths of the privileged class, reinforced by politicians and police. The common people are riled up, even if they too live on or visit regularly the notorious Carnival Row, which might as well be called Poverty Row, or Red-Light Row, or Prostitutes' Row.

Crusaders for a cause, Philo and Vignette share a history together, which inevitably brings them into the same fight for justice. The alternative-history, steampunk atmosphere allows familiar prejudices to breed unfettered, and all this is quite well realized by the production team. Thor Freudenthal directs the first episode effectively; Jon Amiel concludes the final two episodes with a sense of urgency that sometimes feels pressed to fit into a time slot.

After watching all eight episodes, I felt pleasantly immersed in the alterna-Victorian world created by Travis Beacham (Pacific Rim) and Rene Echevarria (TV's Teen Wolf, The 4400). Bloom and Delevingne make for appealing and stirring dramatic leads; among the supporting cast, I especially juicy performances by Jared Harris, Indira Varma, Tamzin Merchant, Indira Varma, and Alice Krige. as well as Karla Crome as Tournmaline, a faerie of ill repute who reunites with her best friend Vignette.

With a surfeit of explicit, if medically-inclined violence -- I wasn't kidding about intestines -- and its own share of naked bodies and an excess of common profanities, Carnival Row is a rough-edged fantasy drama that occasionally becomes broader than it needs to be. Still...

Summing up: When Carnival Roar soars, as when it envisions how a fae library might be designed, its murderous flight transforms into a thing of dark beauty.

Do you feel this content is inappropriate or infringes upon your rights? Click here to report it, or see our DMCA policy.
AmazonAmazon PrimeCara DelevingneOrlando Bloomsteampunkstreaming