Now Streaming: BELZEBUTH, The Devil in Mexico Heads to Shudder 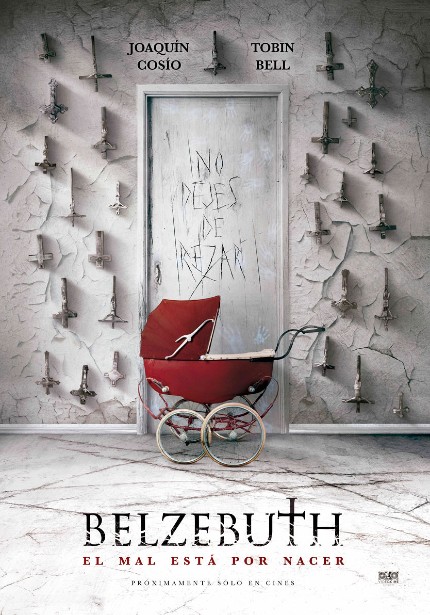 Belzebuth
Streaming on Shudder as of Thursday, August 29, 2019.

Detective Emmanuel Ritter is a bitter man. In a very bloody opening sequence, Belzebuth paints a disturbing picture that explains why the Mexican detective still broods about the loss of his newborn child, followed by the death of his beloved wife, Marina.

As embodied by Joaquín Casio, the detective retains his authority, but appears to be an empty husk. He appears to have lost nearly all of his empathy for others, though he has taken in his late wife's sister and her young boy. When Ritter is assigned to investigate a school shooting in which a child unaccountably murdered a classroom filled with fellow children and then commits suicide, he is gruff and somewhat brutal to the boy's grieving mother.

Our own Eric Ortiz Garcia explains what happens next in his excellent review:

"The bleak, violent tone of mex noir, with the detective working on crime scenes that certainly refer him to the worst day of his life, is interrupted so that Belzebuth, little by little, becomes a horror film of the supernatural subgenre, making use of such overexploited elements as demonic possessions and exorcisms."

He also pinpoints why the film goes awry:

"The script of Belzebuth, co-written by Portes himself, is a real disaster, beyond the commonplace things. It completely overshadows the striking initial sequences of violence, with its absurdly 'complex' and consequently irrelevant explanations to link the main actions: the Mexico devastated by the narco war as the scenario of numerous miraculous resurrections that lead to a sort of cheap redo of Children of Men, with a priest (Tobin Bell, also an American actor given that much of the film is spoken in English) that maybe is the diabolical antagonist or the heroic main protector of the new messiah."

On the small screen, its defects are less glaring. The first third of the film played especially well. Casio's pain and suffering, and the way he strikes out at his only friend, fellow officer Demetrio, feels authentic. He has been exhausted by life and by his work, and likely has been in a deep state of depression for years. The narrative then moves away from Casio, which undermines the empathetic mood that has been developed. So, I felt the film could have concluded much sooner and been more effective.

Summing up: Good, workable ideas are present, but get swallowed up by the story's turn that, personally, made my eyes roll. (No disrespect intended.)

Do you feel this content is inappropriate or infringes upon your rights? Click here to report it, or see our DMCA policy.
Emilio PortesJoaquín CosioMexicoShudderTobin Bell