Exclusive Poster and Stills for Sidewalk Bound THE GHOST WHO WALKS

Keen-eyed cinephiles with a penchant for true American indies from this past decade will recognize Cody Stokes as the cinematographer and co-writer of Uncertain Terms and Soft in the Head, seminal micro-budget features from prolific director Nathan Silver. Stokes' own work as a director has fallen both on the narrative and documentary sides, and includes the excellent, A Year Long Morning (viewable on the filmmaker's website).

Ahead of its bow at the 21st annual Sidewalk Film Festival on August 24, Screen Anarchy is pleased to share a sneak peek of Stokes' feature directorial debut, The Ghost Who Walks, a moody crime drama with a tinge of Christmas spirit.

Winner of the coveted U.S. IN PROGRESS prize at the 2018 Champs-Elysees Film Festival, Stokes had the following to share on his work:

My elevator pitch is that it’s “Carlito’s Way” meets “It’s a Wonderful Life”. It’s a Christmas film, a crime thriller, and a family drama all rolled into one. Then doused in hard liquor and covered with broken glass.
I came up with the idea for this film after my daughter was born. My job had me traveling a lot and this got me thinking about what it would be like for her to grow up without me, or if she didn’t know who I was. I wanted to examine that through this film.

The Ghost Who Walks stars Garland Scott, of the Sundance winning The Infiltrators, Frank Mosley (Chained for Life), and Alexia Rasmussen (Master of None). Check out a new poster designed by Caspar Newbolt, and then a set of stills in the gallery below. 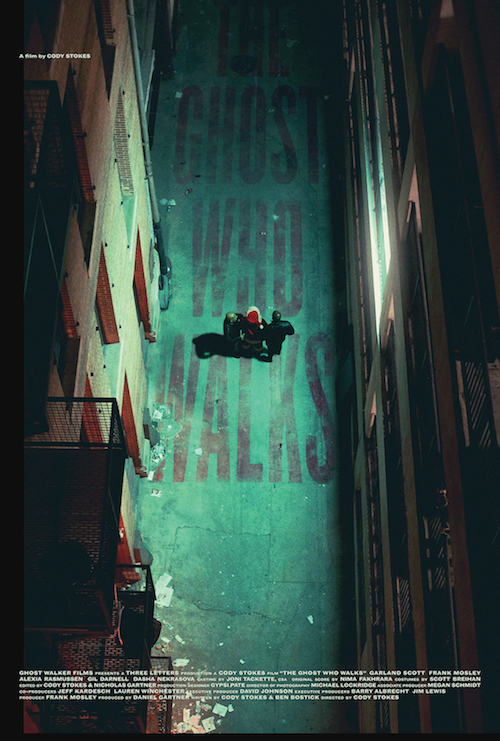 Do you feel this content is inappropriate or infringes upon your rights? Click here to report it, or see our DMCA policy.
cody stokessidewalk film festivalthe ghost who walks