Criterion in November 2019: In COLD WAR and BETTY BLUE, Love Gets Heated 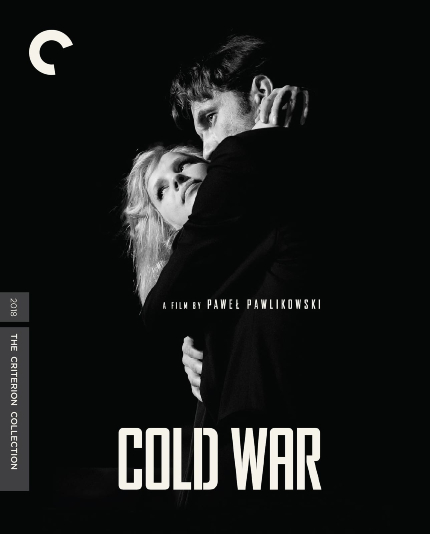 Our own Dustin Chang wrote: "Shot again in full frame monochrome by Lukascz Zal, Cold War is every bit as beautiful as Ida. His use of head space is there and it's lovely. Kulig has a clear and beautiful singing voice in every style, providing some of the loveliest vocal tracks for the films great jazzy soundtrack." Dustin expressed nuanced reservations about the film, and I agree with all that he mentioned in his fine review. Still, this is a new 4K digital master, with several fine extras, and it should look splendid on your viewing device of choice.

The other immediately eye-catching film on the release docket, Betty Blue may be best remembered as "a sexy, crazy, careening joyride of a romance" from director Jean-Jacques Beineix and his stars Béatrice Dalle and Jean-Hugues Anglade. Released in 1986, it caused quite a sensation on the arthouse circuit, as I recall, and the tease of the "extended director's cut" -- 185 minutes! -- is certainly intoxicating.

Director Greg Mottola made his feature debut in 1996 with The Daytrippers, starring Hope Davis, Parker Posey, Liev Schreiber, and Campbell Scott. I'm curious to see how the film plays today; it's a road trip to Manhattan, filled with characters competing for attention, as I recall. New interviews with the director and those actors are included on the disc, along with an audio commentary, featuring Mottola, editor Anne McCabe, and producer Steven Soderbergh, and an early short film by Mottola.

Bette Davis devotees will certainly rejoice over the prospect of seeing her classics Now, Voyager and All About Eve. Melodrama! Satire! 4K! It's all here, folks.

Come November, we hope to have reviews of some of these films. In the meantime, visit Critireon's official site for more information on each release so you can make informed shopping decisions.