Blu-ray Review: Into THE INLAND SEA With Donald Richie

Criterion devours its own tail with a movie based on a book based on a trip by a critic who has provided a lot of Criterion commentaries. 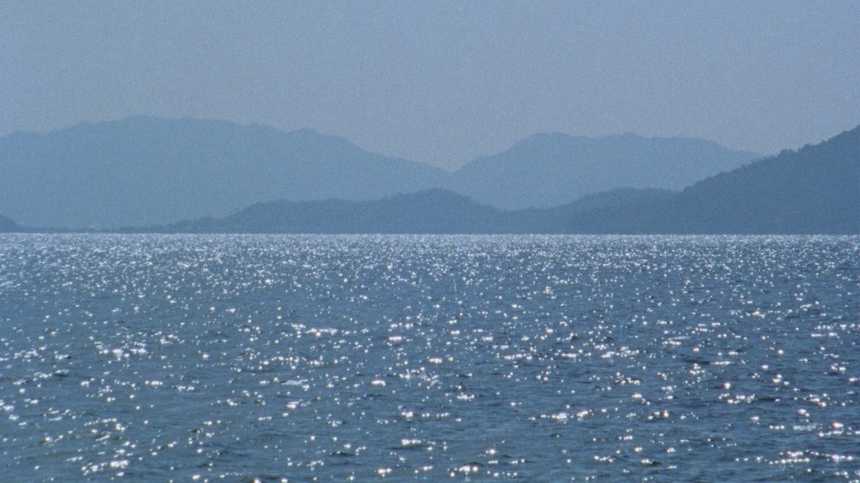 As must be the case for many of us, the late Donald Richie was an access point for me into the world of Japanese cinema. I recall Richie's voice so clearly from his commentaries on the Criterion Collection releases of Seven Samurai, Rashomon and Drunken Angel that when I read his 1971 travelogue, The Inland Sea, earlier this year, I could hear that same meandering, gravel-dry wit narrating in my head.

Richie also wrote what might be the definitive handbooks on the two leading Japanese directors of the 20th century, Kurosawa and Ozu. His sprawling The Films of Akira Kurosawa is still the first book I turn to after re-watching one of the master's works, even though I've probably read every page of that thing twelve times apiece. I think I had mentally filed the fact that Richie had also written a travelogue, though I'd never gotten around to reading it until this March, when I was preparing for my own second trip to Japan, which would include my first tour of the inner islands in Seto Naikai. This was before I knew The Criterion Collection would be releasing the film of The Inland Sea later the same year, or indeed, before I even knew such a film existed. All of this timing is slightly uncanny. In The Inland Sea, Richie speaks of the Shinto religion and of natural gods, and the way shrines have a silence that is different from the enforced quiet of Western churches. But he also mentions how the Japanese refuse to formally acknowledge that they enjoy just wandering around. Reading the book and watching this film, I felt both of these demarcations very clearly.

Directed by Lucille Carra in the early 1990s and re-tracing the steps of Richie's book -- itself the product of many trips to the Inland Sea area -- with as much fidelity as the intervening decades allow, the film is a scant 56 minutes long. It feels somehow less tactile than Richie's book, in spite of bringing to visual life islands, shrines, and villages that Richie only conjures using his ambling prose.

The focus here is on vignettes, almost all of them short to the point of being inconsequential. Richie himself provides the narration from his own writing, and Carra assembles analogous sequences to bridge the twenty year gap between the writing and the filming, adding new snippets -- a temple that will cost as much to tear down as to repair; a widow who raised her children by delivering newspapers and fish to the mountaintop -- recorded on location.

Gone are Richie's book-long existential crisis on his status both within and outside Japanese culture, though a few of his forthright declarations on the nature of Japanese identity remain (and remain marginally colonialist, and presumptuous, in their assertions). It would have been interesting, in the special features, to get at least one Japanese writer or critic to discuss Richie in kind. All of the canned material, though, features speakers -- Paul Schrader, Ian Buruma, and Carra herself -- from America, a land Richie left behind in the 1940s.

Gone from the film as well are Richie's series of sexual adventures and misadventures throughout, which culminated in a night with a prostitute in Hiroshima. (An out bisexual, Richie's suggestive dalliance with a young man in a grove near a Shinto shrine is also missing -- and, for me anyway, more missed.)

None of which takes away from the ephemeral poeticism of the piece, filmed in a dying format (16mm celluloid) in a dying environment (as more and more rural areas of Japan were gobbled up by cities and industrialization) at the end of a dying century. The Inland Sea of The Inland Sea is already nearly unrecognizeable to me now, who visited several of these spots just a few months ago. What remains, however, are aspects of Richie's own final thesis in The Inland Sea, which holds that -- to the white outsider, at least -- Japan is a series of ideas that eventually coalesces to reveal only a mirror of the visitor. This, too, perhaps of all travel.

Do you feel this content is inappropriate or infringes upon your rights? Click here to report it, or see our DMCA policy.
DocumentaryDonald RichieThe Criterion CollectionLucille Carra