Now on Blu-ray: TRANSIT, Lost Souls in a Troubled Land 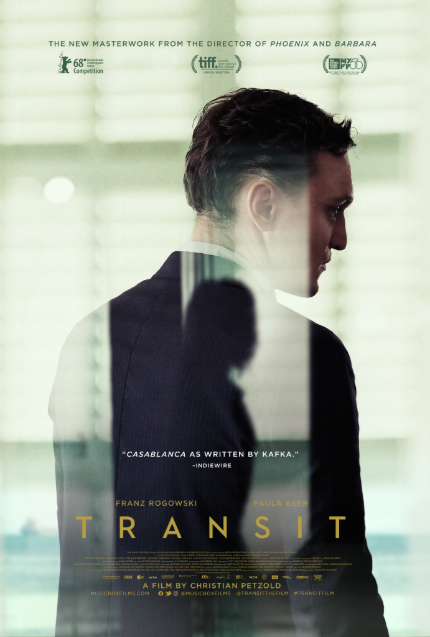 I'm paraphrasing actress Paula Beer in my headline above, so I think I'm on safe ground.

Paris will soon be closed down by invading authorities, prompting Georg (Franz Rogowski) to accept an offer to deliver two letters in exchange for safe passage out of the country. Things do not go as planned, and Georg soon finds himself in Marseilles, having assumed the identity of a man who is no longer around to complain.

Our own Kwenton Bellette saw the film at the Melbourne International Film Festival last year and filed his review. He concluded: "Transit is literature. Heightened by the beautiful prose and highly thought-provoking, this is a beautifully told noir, one that is carried by one of the best performances of the year as Franz Rogowski depicts this extremely complex character in an unforgettable way."

I agree completely. Transit is disorienting initially, yet any possible confusion about time and place takes a back seat to the characters, who dominate by quietly inhabiting a place out of time.

Released today on Blu-ray from Music Box Films, the disc features German and French audio, available in 5.1 and 2.0 versions, with subtitles available in English as well as English for the deaf and hard of hearing. The picture looks crisp and beautiful, as should be expected from a recent release.

Of the extras, I've watched "Making of Transit" (23 min.), which is essential. Director Petzold explains the influence of the source material on all his previous films; how he came to make this film; and his decision to follow the events of the novel, set in 1940, but based in the present day. That's all interspersed with behind the scenes footage, and interviews with lead actors Rogowski and Beer talking about the director's working method, favoring rehearsals over takes. Petzold also explains how he came to cast the film.

"The Cinema of Transit: Interview with Christian Petzold" (6 min.) focuses on the director a bit more, while "The Refugee as a Person: Interview with Franz Rogowski" (9 min.) allows the actor to explain how he related to his character on a personal level; he also related two powerful incidents that influenced his performance. "Franz Rogowski: Shooting Star "(3 min.) is a breezy feature on the actor.

The package also includes the film's theatrical trailer, along with trailers for films starring Rogowski and Beer (In the Aisles and Frantz, respectively), plus film festival sessions from New York -- "Christian Petzold Q&A" (26 min.) -- and Berlin -- "In Transit: Thrown Into the World," featuring a conversation with Petzold and actress Barbara Auer (42 min.).

I especially appreciate seeing a printed Collectors Booklet included in the package, featuring an essay by Ignatiy Vishnevetsky and an additional interview with the director.

Summing up: Marvelous release for an absorbing film.