Notes on Streaming: KNIGHTS OF THE ZODIAC: SAINT SEIYA, Shout and Fight

The newest iteration of the long-established character is in 3D. 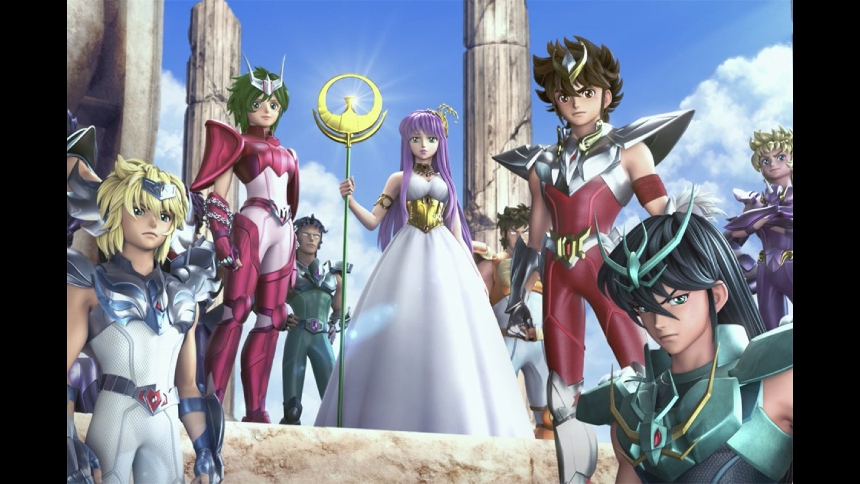 I imagine that some people might really enjoy the new anime adaptation.

Knights of the Zodiac: Saint Seiya
Now streaming on Netflix.

I've been watching a lot of 2D animation series during July, so this new 3D adaptation of an old favorite felt like a splash of cold water on a winter's day.

In other words, not terribly pleasant. Beyond the blocky appearance of 3D animation, which sometimes looks clumsy and awkward in the hands of Toei Animation, or the English voice cast, who often sound declamatory and shout-y, it's the overall focus and tone of the series, which quickly wore me down.

I watched all six episodes that are now available, and it didn't get any better for me, though I may not be the target audience. Frankly, I am not sure who the target audience might be. Sprinkled with 'lighter' profanities and an excess of machismo, braggadocio, and muscular action, the series may be ideal for boys up to the age 10-12, though your (children's) mileage may vary.

Based on Kurumada Masami's manga series, first published in 1986, far too many adaptations have been released for me to comprehend as an anime newbie. What I can comment upon is that the animation is fine for what it is; I'm not, particularly, a fan of 3D animation in this style for a dramatic series. (What works in video games doesn't always work in films and television shows, and vice versa.)

In this series, young Seiya demonstrates "special powers," in the words of the Netflix description, that bring him to the attention of "the enigmatic Almon Kido, who urges him to fulfill his destiny and become a Bronze Knight." Much fighting ensues, as Seiya confronts opponents, joins forces with allies, encounters Black Knights, wears Gold Armor, and encounters overwhelming hate.

So, yes, I think it's safe to assume that the filmmakers wish to appeal to younger people, to the possible exclusion of all others. Nothing wrong with that, of course, but if you're watching along with your children, you may need to be prepared to hear them shouting and pretending to slash people with their pretend swords and things.

Summing up: Watching one episode is probably enough to decide if it's for you (and/or your family) or not.

Do you feel this content is inappropriate or infringes upon your rights? Click here to report it, or see our DMCA policy.
JapanKnights of the ZodiacNetflixSaint SeiyaToei Animation