Fantasia 2019 Review: THE ART OF SELF-DEFENSE Is A Comedic Swiss Watch 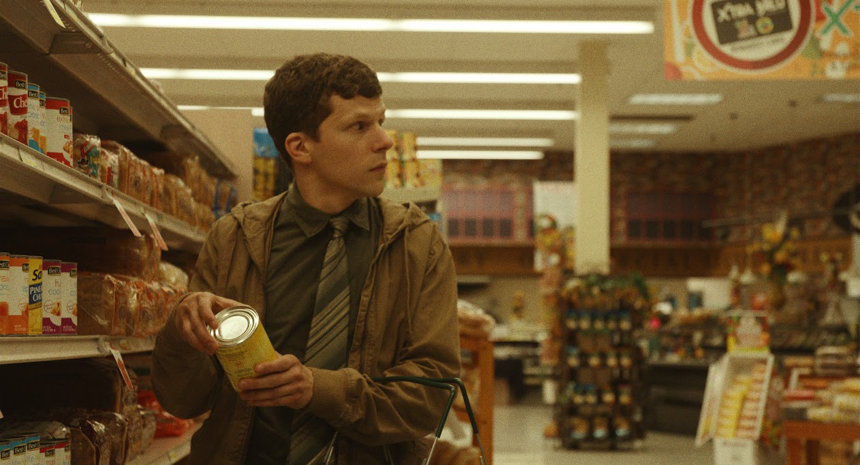 Casey is a quiet, nebbish, accountant who lives by himself. He has no friends except his impossibly cute Dachshund. He is introduced sitting quietly and nervously in a cafe, attempting to learn French. The line he is practicing is "I don't want any trouble, I am just a tourist."

Riley Stearns' sophomore film is a precise and droll comedy of manners, martial arts, and toxic masculinity. The Art of Self-Defense is a significant leap forward in terms of craft and technique from his tiny debut film, Faults, which saw Leland Orser as a washed up 'deprogramming expert,' who is hired to rescue a girl from the mental clutches of a cult. That 2014 film precariously walked the line between dry comedy and twisty thriller, not always perfectly, but showed signs of a strong voice.

Things have paid off handsomely in his writing and directing here. The Art of Self-Defense is story of a timid man-child who, after being brutally beaten by street thugs when out to buy dog food one evening, joins a Karate dojo to, in the words of the hyper-masculine Sensei (Alessandro Nivola), "become what you fear." Casey no longer intends to be a tourist in his own life.

Jesse Eisenberg brings all of his awkward intensity to bear here and distills it into a quite specific and fussy comedic performance. In his role as the 'student of the things that men do,' it is a curious callback to his debut film role in Roger Dodger, where Campbell Scott teaches him in the ways of seducing women on the New York singles bar scene. Never fully climbing out from typecasting of that particular performance in 2002, Eisenberg has since polished and sharpened the possibilities of this type of character over the last 17 years. It is a hell of a thing.

Stearns's screenplay efficiently sends up the hubris (and sheisterism) of the karate craze in the suburban West in the late 1980s (tellingly, when this movie is set) by wittily contrasting peak doses of testosterone against the teaching of young children in the daytime classes that Casey joins as a white belt; the kid's bored mothers idly sit (notably mobile device-free) on the benches in the background. But that is all just the amuse-bouche as Casey becomes more obsessed with his growing confidence and karate-chops (at the cost of what little life he had). Eventually, he is invited by Sensei into the Fight Club-esque Night Classes. Here, the students are indoctrinated into a cycle of violence that is not so much any specific social commentary, but rather it allows for all of the weird hints and situations to snap into a Swiss-Watch of a story.

What is most appealing about The Art of Self-Defense, to these eyes, is the direction of the film. While Eisenberg, Nivola, and a fire-brand Imogen Poots as the lone female student in the dojo (with bigger balls than any of the men), all deliver exacting performances, much of the humour is done with the camera movement and a particular production design.

Whether they are intended or not (and I hope they are), there are subtle nods to Alex Cox's Repo Man.The film never tries to deliver anything like 'the real world,' but delights in a heightened and detached scenario that echoes the American existence of the 1980s, but does so as an almost alien landscape. This will likely be off-putting to some and delightful to others. I am firmly in the latter camp.

The strategy here, like a good stage magician, is to let the audience always be one or two steps ahead of the act, but then deliver the payoff in such a way that is both surprising and inevitable. Stearns often employs uncomfortable violence in these moments. And yet, he is fleet enough, with a density of dryly quotable wordplay and buffed diction, to be already deflecting against how satirically mean things can get for a gag.

This back and forth ensures that there is never a dull moment in the film, even as it leans into this unusual rhythm. Like Edgar Wright, Steven Spielberg, and Quentin Dupieux, Stearns knows how to deliver a comedic punchline visually. He can even punch with his feet.

The Art of Self-Defense

Do you feel this content is inappropriate or infringes upon your rights? Click here to report it, or see our DMCA policy.
Alessandro NivolaImogen PootsJesse EisenbergRiley StearnsSteve TeradaComedy

More about The Art Of Self Defence