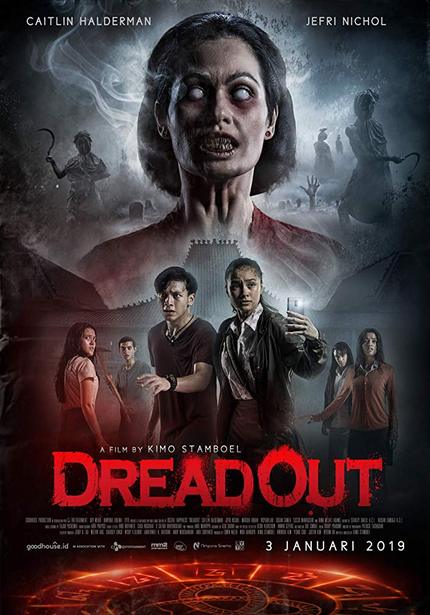 In an amazing coincidence that I presume will become more and more common as time goes along, Fantasia 2019 boasts not just one, but two films that utilize people entering buildings wherein deadly tragedies have occurred as a method of building their social media presence.

The first was Nakata Hideo's opening night film, Sadako, the second is director Kimo Stamboel's solo directing debut DreadOut, a kind of free-form adaptation of a popular Indonesian video game. The two films may share similar plot devices, and even a few similar elements - both use open wells as central locations, oddly - but they couldn't be more different in execution. For those without the patience to explore the mythology of Nakata's Sadako, Stamboel presents more of a rousing survival horror packed with scares and bloody FX to sate the baser instincts of modern horror fans.

A group of young men and women lament their poor numbers of followers on Instagram and decide to do something about it. Lucky for them, nearby is an abandoned apartment block, all but swallowed up by the jungle, but notoriously haunted. A perfect spot for a Instagram live feed to help boost them up beyond their friends and turn them into social media stars. What they don't realize is that the building is abandoned for a reason, and soon they find themselves trapped between nightmare worlds fighting for their lives.

As they reach a particular apartment with a number of spooky runes and sigils on the ground, things get very scary when all of the sudden, a well opens up in the middle of the room, which they soon discover is a portal to another world full of vengeful demons and a window to a more savage past where a violent mythology comes to life.

Stamboel made a name for himself behind the camera as one half of The Mo Brothers with Timo Tjahjanto, whose collaborations include some of Indonesia's most celebrated genre films of the 21st century including Macabre, Killers, Headshot and their stunning first short film Dara. Recently the pair have struck out on their own, with Tjahjanto wowing audiences with the one-two punch of The Night Comes For Us (one of my favorite films of 2018) and May the Devil Take You. DreadOut is Stamboel's debut solo feature, and it proves that neither of the two were carrying the other as this film brings plenty of solid scares to the table.

DreadOut may be based on an Indonesian video game, but those unfamiliar with the game need not shy away, the film actually deviates significantly from the game's plot, turning itself into a kind of meta-treatment of the material. In fact, there is more than a passing similarity between DreadOut and the recent reboot of Jumanji with Dwayne Johnson. While Jumanji wasn't originally a video game, the thematic material connecting the real world and the "game" or "other" world in DreadOut is fairly similar. Both film utilize video game mechanics, real or imagined, to push their stories forward, but DreadOut is a far bloodier affair, which will put big smiles on the faces of horror fans.

Fast-paced, and with more than enough gory gags to satisfy horror fans, DreadOut is a solid outing from all of the cast and crew, and it manages to transcend its source material in a way that won't alienate those who've never heard of the game. Kimo Stamboel and his team deliver yet another gruesome gem that further cements Indonesia as one of the hot spots for international horror and genre film fans, definitely worth checking out.