Ever since his breakthrough film, 2011’s Monster Brawl, Canadian filmmaker Jesse Thomas Cook’s love for zombies was more than evident. In said brawl, one of the contenders from the undead conference was, precisely, the Zombie Man (played by Rico Montana), a being from a late sixties outbreak that the military has kept in Pittsburgh, Pennsylvania, in an obvious nod to George A. Romero’s influential masterpiece Night of the Living Dead.

Now, Cook is back with Deadsight, his very first full-on take on the zombie subgenre. After unknown reasons have caused a zombie apocalypse, Ben (Adam Seybold) wakes up inside an abandoned ambulance, only to realize that he has lost his sight and has no recollection of how he ended up there. As he tries to stay alive in the midst of the zombie outbreak, he will eventually ran into Liv (Mara Madigan), a police officer who’s facing the crisis while she’s actually pregnant. Will these fragile protagonists be able to survive the living dead?

Before the release of Deadsight –now available on DVD, VOD and Digital HD– I talked with director Cook about the zombie film and how was the process to add his own voice to this popular horror subgenre, which happens to be his personal favorite.

ScreenAnarchy: Unlike on MONSTER BRAWL, you don’t have a writing credit on DEADSIGHT, so I was wondering how did you become involved?

Jesse Thomas Cook: I haven’t written a film since Monster Brawl in fact, which is nice because I don’t have to add that to the workload. Deadsight was the ninth film that we’ve done with our company here in Ontario, Canada. It was my turn to make a film and I always wanted to do a zombie film, they’re my favorite subgenre of horror but I never got the chance.

With Monster Brawl I’ve done my monster film, Septic Man I’ve done like a creature film, The Hexecutioners was haunted house, but I never got to do zombies. I produced a zombie film, Exit Humanity, but I never got the chance to helm and direct one, so me and my wife Liv [Collins], who co-wrote it, and our writer buddy Kevin [Revie], we just sat down for a weekend and we were throwing ideas around. I just sort of said, “I really want to do a zombie film”, so we came up with different ideas and settled on this idea of following a man with blindness in the zombie apocalypse.

The first draft was a comedy, in fact. It was very funny, we were watching this guy, sort of like Mr. Bean just bumbling his way through this zombie countryside with this walking stick, blind, just narrowly getting out of trouble. It was very silly, it was sort of one note, I would have made like a good Saturday Night Live skit but it wasn’t enough for a feature so we changed the tone of it and made and much more darker and grim and realistic film. That was how the project evolved quite quickly, we didn’t start writing until about six weeks before we started filming it.

There are a lot of movies about the zombie apocalypse. This one is more minimalist, focussed on the characters, so what was the most difficult aspect when trying to maintain the tension in a film with almost no dialog?

You’re right, it’s very minimalist, partly due to the budget and time constraints but also because we didn't really want to get into the backstory of the zombie virus or where the characters came from; we just know that, everybody knows “OK it’s a zombie film”, so we are allow to immerse ourselves right into the crisis. I didn’t want to spend much time, the guy wakes up and he’s just being chased. The first 15 minutes, it’s going to be him being chased until he finally finds this farmhouse; very similar to Night of the Living Dead, of course, that was the big inspiration. 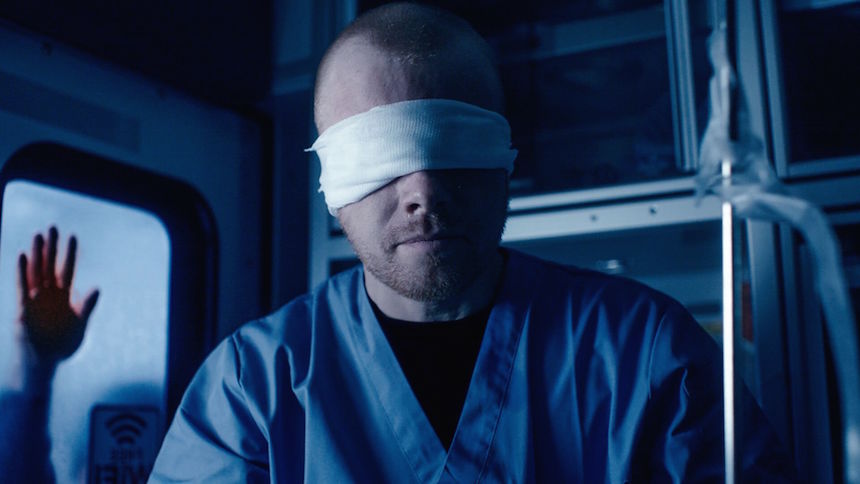 Then introducing Liv’s character too, the police officer, so yeah, you don’t get like any dialog until about 20 minutes in, so we are trying to experience the film through the eyes of Ben, the guy who’s blind. So I’m using very tight camera angles, staying on closeups; all the wide shots I did, all my master shots, I just threw them out because it removed you from the tension right away.

To keep the tension I just stayed on his face, hands and feet, so you don’t know what’s right in front of him at times. That way I was able to keep the tension there. Once we get into the two characters meeting each other, we can slow it down and we learn a little bit but we never truly know what the hell is going on. It was about these chase scenes landing us to these bigger set pieces where we can finally have dialog.

Aside of Ben’s temporary blindness, you have Mara who’s pregnant. How fascinating was to explore these very peculiar aspects of the characters that are not only facing the zombie virus but also some very personal and intense issues ?

That’s exactly it. That’s how we tried to give the zombie genre a little something new, these two characters that are incredibly vulnerable, they’re the kind of people you think would just die instantly in a zombie virus, especially if there’s a horde of zombies.

I’ve seen pregnancy in a zombie film before, but I don’t think I’ve seen blindness. I think having these two characters be the only characters, there’s no big hero, there’s no expert zombie hunter. And then also, the winter element too; we’ve seen Dead Snow, there’s been a couple zombie winter films, but because we are up here in Canada the winter is very cold and we thought a winter zombie film with a blind guy and a pregnant officer, that’s something that's a little bit different.

I wanted to make a story where these two seemingly vulnerable people, together realize they have to help each other, they have to get along, you don’t care where each other came from; just throw away all of that stuff, it doesn’t matter if one’s male or female or anything like that, it’s just about the two human beings who have to help each other and are stronger by doing so, set in of course the background of a zombie film.

That’s really all I wanted to do. I’ve seen so many different zombie films and horror films, and I’ve made films too that are sort of vicious or mean, but this one, maybe it’s from being a parent of three kids [laughs]… I just wanted to do something where the characters help each other [laughs]. 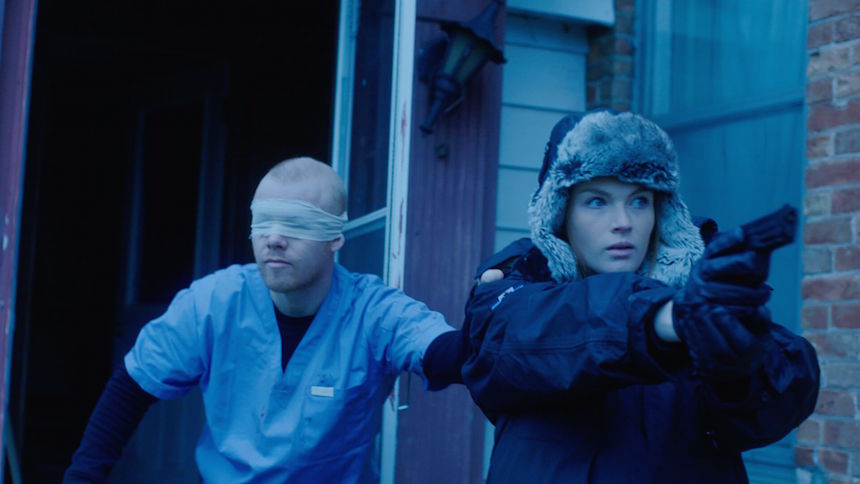 There are only hints at what happened to Ben, the house fire, but we never really know everything about that. At the same time, we do feel that this character by the end of the movie has some redemption.

Absolutely, the first half of the movie is really like Mara having to help Ben, and his liability, he’s going to wait her down, he’s the one who’s really in need of help. Then the story at some point shifts, and it becomes Mara realizing she can’t do it on her own, she needs Ben to help her, and Ben realizes that too: he’s going to have to eventually be the ultimate sacrifice.

For me it was like, you don’t get to know too much about Ben, you don’t about the house fire, did he cause it? Is he an evil man? It doesn’t matter because for now, for all we know all he’s left to do on this Earth is sort of be this guardian angel for Mara, to make sure she can have that baby and get to safety. That was really the arc, more of a redemptive story for him, for now with the new situation being this horrific zombie event, it doesn’t matter what has happened to him, as long as he can save her then that’s his purpose.

I think recently some really great zombie movies have come out, like TRAIN TO BUSAN and the comedy ONE CUT OF THE DEAD. This is a horror subgenre that you love, so how do you feel about what’s going on with it right now?

I think it’s great. Train to Busan was amazing. Obviously the popularity is still there, mostly probably from The Walking Dead, but I think it’s a genre that’s not really going to go away. Zombie films are almost as popular as, say, all other horror films combined. For me, selfishly, it wasn’t even about trying to do anything new really, it was more to satisfy my own urge to make a zombie film [laughs]. I didn’t purposely tried to get on a trend, I've just genuinely always loved zombie films and never had the chance to make one, and I wanted to make one before we finished our company because that was the last film we did under Foresight Features. I was happy I got to make a zombie film. 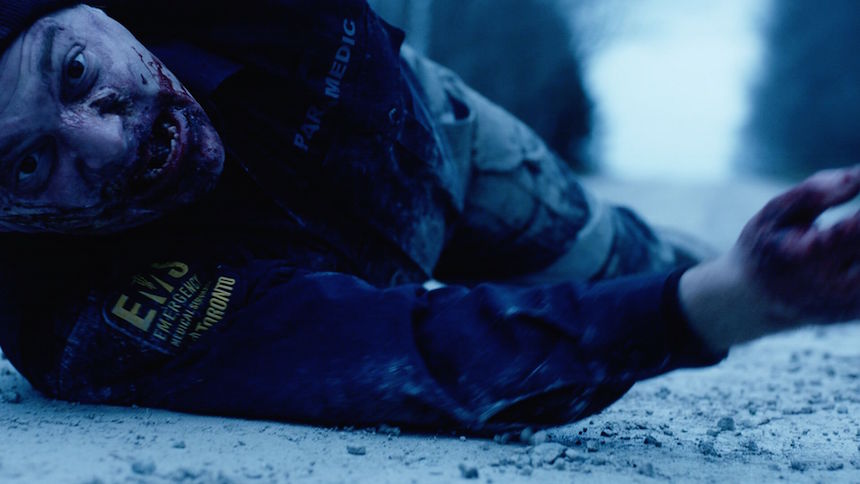 NIGHT OF THE LIVING DEAD was, like you said, a huge influence. What other classic or new zombie films are among your favorites?

Certainly all the Romero films, 28 Days Later…, Shaun of the Dead, all the big ones. And then there’s some smaller ones like Shock Waves, even The Video Dead. For Deadsight, I was always a big fan of the Resident Evil video games and we jokingly said that this one was like a fan-made Resident Evil film with the police officer, the ambulance, the various items, weapons and limited ammo, and the film ends in a factory, with the alarm going off, so there’s a lot of Resident Evil in there too.

Do you feel this content is inappropriate or infringes upon your rights? Click here to report it, or see our DMCA policy.
DeadsightHorrorJesse Thomas CookMonster BrawlZombies