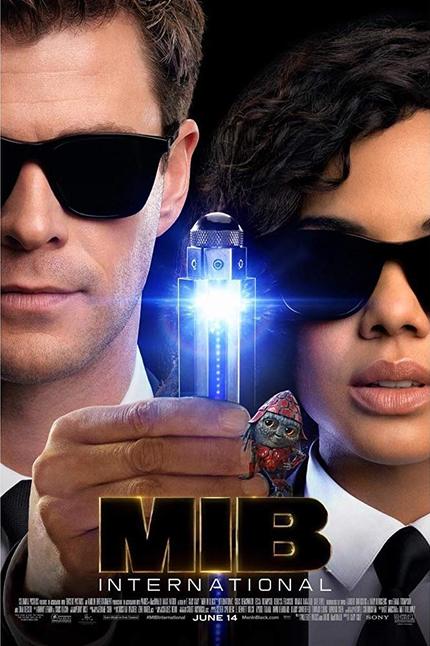 The fourth in the hugely profitable - and fun - Men In Black series, Men In Black: International takes the duty to protect Earth from nefarious space aliens to Europe, introducing a new pair of leads and a whole new cast of supporting characters. Between 1997 and 2012 the series, fronted by perpetual charisma machine Will Smith, presented one cosmic cataclysmic conundrum after another, borrowing tropes from the great spy films going back to the Cold War. The first film is a classic of modern science fiction, and even the worst of the three ain't so bad. With MIB:I, however, the need to replace Smith in the lead has dire consequences that ultimately makes this global adventure fall flat.

First, we meet Molly (Tessa Thompson, Sorry to Bother You, Thor: Ragnarok), a twenty something young woman who once had a close encounter with an extraterrestrial and has spent her life trying to hunt down the organization that zapped her parents' memories of the event so she can join and find out what's really out there. Upon her unlikely discovery of MIB headquarters in New York, she impresses the leader, Agent O (Emma Thompson), is asked to join, and is almost immediately sent off to train at the London HQ.

Agent M - as Molly has been rechristened - is quickly introduced to London MIB boss, High T (Liam Neeson) and hotshot Agent H (Chris Hemsworth, Thor). Hearing that Agent H has a hot ticket to a high stakes operation, M inserts herself into the situation, and what was supposed to be a night out wining and dining an intergalactic bigwig quickly goes sideways when they are attacked by a pair of nebulous assassins (played by French dance phenoms, Les Twins), determined to take out their ward. Chaos ensues, and as anyone who has ever seen a movie might expect, their simple task turns out to have intergalactic ramifications.

From there M and H ping pong between London, Marrakesh, Paris, and Naples following leads and attempting to keep the Earth and everything on it from going up in smoke. Unfortunately for them, nothing is as it seems and the journey is far more fraught than any of them anticipated. Along the way they cross paths with a number of silly aliens including one in the form of Smurfish sidekick, Pawny (Kumail Nanjiani, The Big Sick, Silicon Valley), whose only jobs appear to be making silly jokes and looking dopey.

Director F. Gary Gray packs MIB:I with action from soup to nuts, which is one of the only unabashedly positive things I can say about the film. Gray, who has a pretty incredible track record with action films, having made Set It Off, the criminally underrated Law Abiding Citizen, and Fate of the Furious, has his hands full with this one, and acquits himself nicely in that department, but it's the actors the present the biggest challenge.

MIB:I marks a reunion for Hemsworth and Thompson, who recently appeared in Thor: Ragnarok together in one of the Marvel Universe's most charming films to date. However, in this film their chemistry is negligible. While they aren't being pitched as a romantic duo, even as buddy cops they fall short, especially in comparison to the original trio of MIB films.

With Hemsworth playing the fast and loose Agent H, he is attempting to channel the swagger that Will Smith brought to the second and third films. The problem is that Smith's swagger was earned through a trial by fire in the first MIB, and with Agent H, he just shows up swinging his dick around like he owns the place with nothing to back it up. Thompson's Agent M is a newer invention of MIB:I, a logical woman drawn to the agency through a chance encounter with aliens that she just never forgot.

The pair of them do fine with each other, but they aren't different enough in age, experience, talent, or ability to make for a good odd couple. It feels like watching a pair of old beat cops working a chain snatching case, rather than a mission that could determine the fate of life on earth as we know it. And that's before even mentioning a couple of completely unnecessary twists and turns that sap the urgency out of the mission altogether in the third act. It's sloppy film making and poor directing, very disappointing for a series that's built up tremendous goodwill by following a well tested formula.

Lots of series are able to survive the loss of a leading actor. The most obvious candidate would be the James Bond film that regularly rotate out the old to make room for fresh blood, typically with pretty decent results. Just when you though Sean Connery's machismo could never be replaced, Roger Moore shows up and holds it down for years. Will Smith's departure from the MIB films may have sounded a death knell for the popular series, which is sad because they are usually a ton of fun. I am unhappy to report that this team up is completely unable to replace the chemistry and charisma that made these films an almost guaranteed good time for fifteen years. The next Men In Black may be mourning the death of the series, I know I am.

Do you feel this content is inappropriate or infringes upon your rights? Click here to report it, or see our DMCA policy.
F Gary Gray directs Chris Hemsworth and Tessa Thompson in the 4th chapter of the Men In Black seriesF. Gary GrayMatt HollowayArt MarcumLowell CunninghamChris HemsworthTessa ThompsonRebecca FergusonLiam NeesonActionComedySci-Fi