Nicholas Hoult stars with Lily Collins in a biographical drama about the writer's younger years, directed by Dome Karukoski. 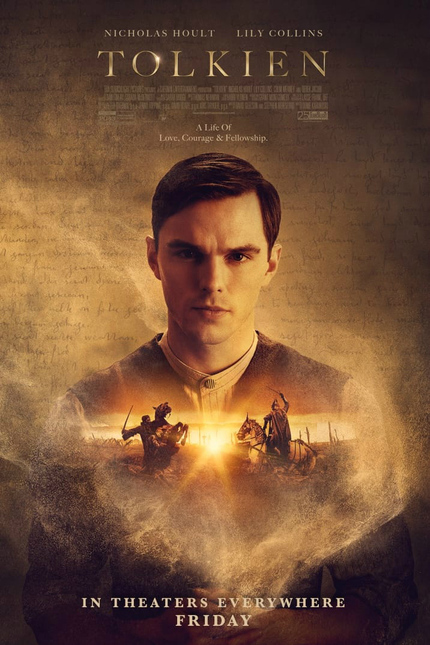 Where do you get your ideas?

A banal question inspires Tolkien, an equally uninspiring biopic that endeavors to dramatize a one-to-one correspondency between events in the life of a young man and the stories that he eventually wrote for his young children.

Directed by Dome Karukoski with a steady hand, the film's chief virtue is Nicholas Hoult's marvelously emotive performance as a largely inward-looking personality, which makes the titular character empathetic, if not terribly magnetic.

Credited screenwriters David Gleeson and Stephen Beresford follow an episodic path that traces the highlights of J.R.R. Tolkien's life over more than three decades that passed before the publication of his first book in 1937. Tolkien's traumatic experiences during the Great War form an initial framing device, allowing an immediate return to the soldier's younger years, when he and his younger brother were orphaned after their mother died and entrusted to the care of a legal guardian, their mother's friend Father Francis (Colm Meaney).

Variously referred to as "Ronald," "John," and "John Ronald" with no apparent distinction or intent, Tolkien (played by Harry Gilby as a young person) and his brother come to live in a boarding house, where the teenage orphan Edith Bratt (Mimi Keene) soon arrives and catches the young man's eye.

Their relationship deepens as time passes, and then the characters are played by Nicholas Hoult and Lily Collins, respectively. Over a meal, Tolkien impresses Edith with an unusual talent: he has invented an entirely new language, and a backstory to go with it. His motivations for doing so, and the circumstances that prompted the quick development of an unusual talent, is left to the viewer's imagination, but Tolkien dismisses it as a lark, in effect.

Tolkien's modest, self-effacing tendency to minimize his own natural talents and interests are explained as a reaction to the stern training instilled by Father Francis, under whose guardianship Tolkien must submit until he turns 21 years of age. The priest's insistence that the young man attend Oxford requires that he break his relationship with Edith, which he does with some reluctance.

The character's modesty undercuts various dramas that arise throughout the film's running time, as Tolkien then heads to Oxford, makes new male friends, and eventually answers the call to military action when war breaks out in Europe and around the world. How he reacts to the warfare also comes to affect his personality, but throughout he is a man who is keenly attuned to the needs of others, far more so than his own.

Commendable as those traits may be, they do not make for a very exciting motion picture. Since the bulk of the time is spent with Tolkien, neither his male friends from college nor his romance with Edith make more than a soft impact on the narrative. Instead, it's left up to Tolkien -- and the considerable talents of actor Hoult -- to command any attention.

Hoult is a more than capable actor, and is accustomed to underplaying his roles so as to heighten the drama around him. In this film, however, there is not much action and the stakes are only slightly raised ... occasionally.

Finnish-born director Dome Karukoski most recently helmed biographical drama Tom of Finland (2015), which won acclaim and perhaps suggests he was an ideal choice to tackle a biographical drama about Tolkien's early years. Though I haven't seen his previous feature, it seems that its subject was a for more outwardly-fascinating character.

Tolkien has an even larger worldwide base of fans, but little in his life itself suggests events that demanded a big-screen dramatization. Certainly the technical work is fine; Lasse Frank Johannessen's cinematography, Harri Ylonen's editing, and Thomas Newman's original musical score all hit the expected marks of quality.

What it comes down to is that there's not much drama on view in Tolkien's earlier years. And the film doesn't make much of an argument that it deserves a full-blown, full-length feature film. And, after all, not every writer's life demands such a thing, or rewards the effort.

Tolkien will open in theaters across the U.S. on Friday, May 10, 2019, via Fox Searchlight Pictures. Visit the official U.S. site for more information.

Do you feel this content is inappropriate or infringes upon your rights? Click here to report it, or see our DMCA policy.
Dome Karukoski. JRR TolkienFox SearchlightLily CollinsNicholas HoultTolkien