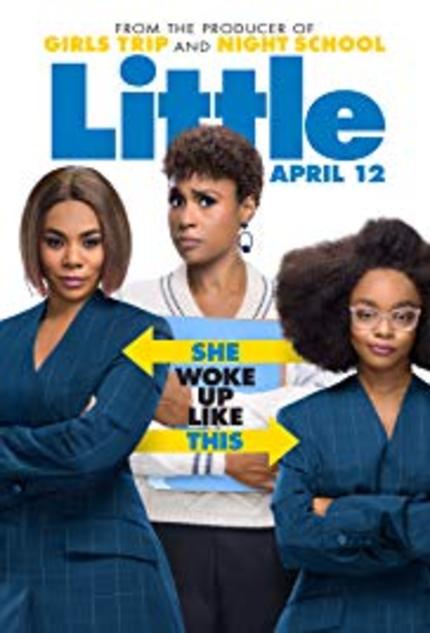 Co-writer/director Tina Gordon Chism's Little is the latest cutesy comedy to enter the body-swapping fantasy chuckles sweepstakes. Aside from the countless comedies that have revisted this now tired premise ("Freaky Friday", "Big", "13 Going on 30", etc.), Chism's ("Peeples") generic gem does have its charming elements and preaches a breezy message about the acceptance of one's self and the bullying tactics that persist. Still, Little makes for small sacrifices as a formulaic fantasy teaser that predictably treads on the same broad waters of its overwrought theme--harking back to the days of innocence and awkwardness in youth.

Unfortunately, there is nothing fresh or frisky about Chism's orchestrated impishness in highlighting an seemingly independent woman needing her pushy ambitions taken down a few notches. The showcasing of our body-switching heroine learning a life lesson in "being yourself" is submerged in the sporadic triteness of the meager material. Little boasts being part of the creative producing minds that were responsible for the hip and urban ditties Girls Trip and Night School. There are some slight doses of amusement and flippancy to Chism's out-of-body-experience chuckler but the bottom line is that the shoddy script (co-written by aforementioned Girls Trip scriber Tracy Oliver) cannot support the well-meaning energy of its spry cast.

The gimmick in Little does a reversal for the most part where this time it is the adult that awakens to the shock of assuming her physical childhood body along with the nostalgic growing pains attached. This is the case for the successful and powerhouse go-getter Jordan Sanders (Regina Hall), a top tech shaker-and-breaker whose latest business dealings will enhance her heralded profile for sure. Jordan is beautiful, ambitious, and calculating when it comes to her work-related savvy. To call this determined business-minded beauty an opportunist would definitely be an understatement of the moment.

Big Jordan gets a rather rude awakening when she is magically transformed into Little Jordan (Marsai Martin from TV's "Black-ish"). Now, this grown woman must be humbled and forced to relive the unpleasant experiences of her 13-year old self--a total turnaround from her self-assured, demanding persona as an egotistical adult woman-in-charge. Consequently, the adorable Little Jordan was an advanced kid in her schooling heyday but she lacked the flowing social graces among her young peers. In other words, Big Jordan (as the hellish bigshot in high heels) is being force fed a needed reminder that Little Jordan (as an insecure young girl in middle school) was the very essence of the kiddie menaces that treated her like crap. Could this chaotic episode in youthful girl Jordan Sanders's rocky existence be the main reasoning behind why she is such an unforgiving iron lady at the workplace as an established "oldster"?

Enter Jordan's loyal but sometimes neglected assistant April (Issa Rae). Poor April seems to exist for becoming her boss Jordan's available lapdog. Long-suffering yet inexplicably patient, the exasperated April can tolerate the demanding requests of her surly superior so much in one sitting. The advantage, however, is something of a revelation for the put-upon April as she is privy to Jordan's magical secrecy. In the meantime, Little Jordan continues to navigate the horror show that is her kiddie being while harboring the mentality of her adult-like mentality trapped in her liitle spunky package of a body. Will Jordan learn how to cope with the two conflicting sides of the coin regarding her big/little sized dilemma at hand?

Indeed, Little does demonstrate its wittiness at sketchy times and its heart tries to be in the right place regarding its escapist silliness. The film's notable depth lies in the animated performances of its players--particularly Martin as the pint-sized Jordan whose infectious smile and bubbly exuberance brings some poignancy to her character's sympathetic backstory. Wearing over-sized eyeglasses and strutting around in surfacing turmoil Martin is charismatic as the unsure youngster with some bounce in her step. As the adult Jordan, Hall does not fare as well because she is relagated to mimicking a bitchy boss lady without much going on with her persona besides making way for Martin's teen tyke to steal the show. The flimsy film fails to capitalize on adult Jordan's obvious burdens with being a highly competent black woman in the perceived white man's world of high technology--something that could have accompanied and compounded whatever emotional scars she carried from her uneven childhood.

Sure, Little is a farce not to take too seriously because its calling card is to be refreshingly off-kilter in its homemade shenanigans. When the film is supposed to mirror the on-going conflict of one individual split by her present and past but the results are lop-sided and favor the kid's jucier account then there is something that has gone awry with the unbalanced execution. Even the support work of Rae's April as the defeated assistant seems to overshadow the so-called redemption of Hall's pit-bull leader. The random gags are occsionally snappy but overall folks you have seen these cheesy theatrics numerous times to even care.

Little yearns to be the ethnically bouncy counterpart to Big but the ready-made synthetic frolic in this cheeky yarn feels small-minded.