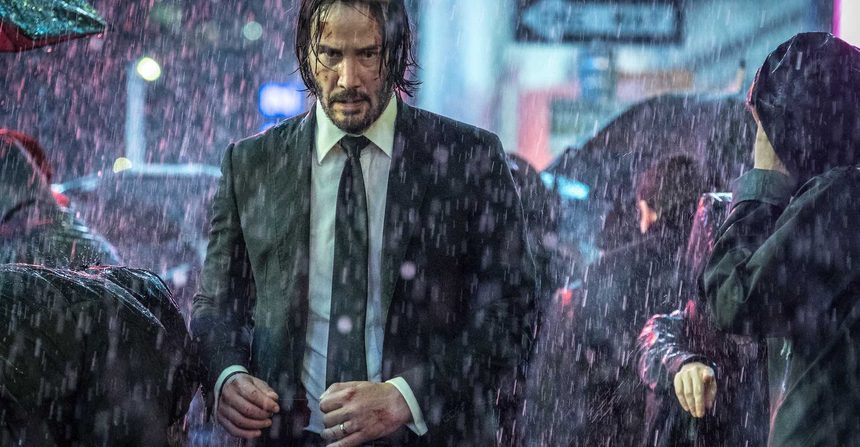 I'll be the first to admit that I was among the minority who felt a little let down by the second part of the John Wick saga. At the time, I was a bit underwhelmed by the series' decision to take what I felt was a very focused, contained revenge story in the first film and blow it up into a tiny part of a seemingly endless universe of assassins for hire on every corner. I thought it was hokey and betrayed the spirit of the original film in a way that made it feel less personal and intimate.

That was then. I am now a full convert

With John Wick Chapter 3: Parabellum, writer Derek Kolstad and director Chad Stahelski expand on the ideas and universe hinted at in the first two films and take them to new levels that more than justify the excess and rapid expansion of the second film.

With this third entry, John Wick leaves a trail of bodies across multiple continents as he attempts to win his freedom from the debts he's incurred over a lifetime of service to the High Table, the international governing body of assassins.

When we last saw him in Chapter 2, Wick had been declared ex communicado from the society, leaving him alone in New York, vulnerable to assassination with a huge bounty on his head. But before he could be hunted, he had a one hour head start, which is where we join him at the beginning of Chapter 3. After surviving the first few volleys against him by assassins looking to make their names by offing the great Baba Yaga, Wick attempts to excise himself from the life altogether by calling in a few favors, but as usual, it doesn't go to plan.

A trip to Morocco to collect a favor from Sofia (Halle Berry), the woman in charge of the Casablanca Continental Hotel - read: oasis for assassins - leads him into further trouble as his fame, and that $14 million contract, have found him and he must once again fight for his life. Several twists and turns later he lands back in New York, looking to win his freedom, but of course it's complicated.

While Wick is off pursuing his freedom, Winston (Ian McShane), the proprietor of the New York Continental has been visited by an Adjudicator (Asia Kate Dillon), who is none too pleased with the way he handled Wick's punishment for past actions. The Adjudicator is determined to take Wick out, no matter what the cost, and she's roped in a team of assassins led by Zero (Mark Dacascos) to do the job. And then shit gets real.

That's an awful lot of plot synopsis, I know, but trust me when I saw that the film two hour run time flies by in a wink as the action rarely slows down for more than a few minutes. The first thirty minutes alone will get the audiences blood pumping furiously as Wick takes on half of New York City with little more than a couple of knives, a car, a horse, a sword, some guns, fists of fury, some motorcycles, a hatchet... well, you get the picture.

John Wick Chapter 3: Parabellum is the best American action film of 2019 so far, hell, it might be the best American action film going back a few years, easily eclipsing the last entry and, for my money, any of the Fast & Furious films so far. Wick's incredible action sequences and in-your-face violence are not only revelatory in terms of their execution (pun intended), but also cathartic for the audience as a way of connecting with the character's pain and simultaneous desire for revenge and closure.

When John Wick stabs a would-be assassin through the eyeball, in excruciating detail, we feel that same release because we've been on this journey with him. The three films in the John Wick series so far take place over the course of a few weeks, and Wick's weariness is evident with every new obstacle thrown in his way. He is no superhero, he feels pain, and the audience vicariously through him feels it, making each successive victory more and more satisfying.

Parabellum is a masterpiece of fight choreography, with the 87eleven action design team going all out in multiple forms with some of the fiercest fights ever seen in an American film. While the focus is obviously on Keanu Reeves as Wick, we also add in the impressive talents of The Raid veterans Cecep Arif Rahman and Yayan Ruhian in one of the film's best showdowns as a pair of Zero's henchmen, and then there's Zero (Mark Dacascos) himself.

In a film full of strong performances from strong actors, it is Mark Dacascos (Drive, Brotherhood of the Wolf, Crying Freeman) who steals every single scene he's in. Fans of Iron Chef will recognize him immediately as The Chairman, but '90s action buffs like me know him as the successor to Brandon Lee as the leading American action hopeful of the late 20th century. While he's drifted away from the hardcore martial arts films over the last several years, Dacascos proves that he hasn't lost a step as his Zero proves to be Wick's greatest challenge yet, along with delivering an genuinely charming performance that provides a bit of welcome levity to balance Reeves' heavy brooding.

That's not to downplay the contributions of the rest of the supporting cast, which grows in size and notoriety with every passing film. John Wick has created a sort of parallel action franchise with the Fast & Furious films, drawing equally prestigious supporting talent as the series goes on. In Parabellum, we not only get the above-mentioned Berry and Dacascos, but also Angelica Huston as the Godmother of the Belarusian mob and Jason Mantzoukas as the Tick Tock Man, a small but important role, not to mention the returning badasses Laurence Fishburne as the King of the Bowery and fan favorite Lance Reddick as the Concierge, given a much more substantial role that in the previous films.

It's tempting to compare John Wick to the Matrix films for a number of reasons, not least of which is the fact that they share a leading man and the fact that director Stahelski, worked in the stunt department (and as Reeves' double) for those films.  There is one major difference, though, and that is that with every new Wick adventure, the films get richer, while the Matrix films suffered a sharp decline immediately after the first film. It seems to stem from the fact that Kolstad and Stahelski have a more clear, fundamental understanding of why John Wick was so successful in the first place, as opposed to the hubris and overindulgence of The Wachowskis in crafting the last two parts of their trilogy.

Like it or not, The Matrix was a success because of its audacious design, both in terms of production and action. Yes, there are bigger ideas in there, and they are not hidden in any way, if anything, they are a bit too out front, but ultimately those big ideas aren't what kept audiences pouring through the turnstiles. John Wick takes that dedication to innovative action and keeps its focus laser sharp on delivering the most impressive visual and visceral feast they can, while still managing to expand their canvas without forgetting the film's raison d'être. The Matrix lost its audience because it thought they were there for the big ideas, John Wick will keep its audience because it understands what its audience wants. Action, lots of big, exciting, inventive action. And it delivers.

One positive lesson taken from the Matrix experience was the creation of a truly cohesive John Wick universe that stretches across the three films and binds them together as being of a piece. Dan Laustsen, cinematographer on both of the most recent chapters, has built a recognizable visual palette for audiences that immediately screams, this is John Wick. Strong pink and purple neons, glass everywhere, precise lighting schemes, and all that glistening blood put the audience at ease that we know what we're getting into, it creates a kind of Pavlovian response: Wick lighting means there's gonna be some pain, and boy does it ever deliver.

As close to an American equivalent of the insane adrenaline rush of the best of Southeast Asian action as we've ever seen, Parabellum provides a new high watermark for action on the big screen. This sequel takes full advantage of the faith put in it by ravenous action movie fans, delivering the fastest 130 minutes you're ever likely to experience. Show up for Reeves, stay for Dacascos, and enjoy everything in between, this is an action lover's dream and I hope I never wake up.