Febiofest 2019: BY A SHARP KNIFE, A Family Tragedy in a Broken System Turns into Social Stigma

By a Sharp Knife, a drama by up-and-coming Slovakian director Teodor Kuhn, is described by the creators as a generational film.

Mainly, it's because real-life events that inspired the film impacted a whole generation, the one where the director and the producer of By a Sharp Knife belong. At the same time, the film serves as a grim memento immortalizing the incident that left one family to suffer the consequences of a wider social issue purposely ignored by authorities.

In 2005, a group of 15 people attacked a group of eight people by the Danube River in the capital of Slovakia. Six people were injured, one gravely. Daniel Tupý, the 21-year old student, succumbed to eight stabbing wounds. A senseless and unmotivated act of violence that seems to suggest that Daniel and his friends were simply at a wrong place at a wrong time slowly unearthed the deeply flawed system.

The attack by a group of neo-Nazis with strings attached to the mafia and mid-level politics proved to be a ghastly wake-up call, and a giant hurdle to properly investigating the homicide. So far, it has not yet been finalized, the perpetrators not judged, justice not served, and Daniel's parents left devastated.

If unacceptable events, such as Daniel's mindless murder, are a country's weatherglass, the filmmakers did not finalize their film under a different social climate. The country, and more precisely the society, received yet another ghastly wake-up call in 2018. Journalist Ján Kuciak and his fiancée Martina Kušnírová were killed in their home, news that shocked the world.

The act has been allegedly motivated by the young journalist's work uncovering large-scale shady and illicit dealings, with ties leading to the upper-rungs of politics, and in one particular case even to the Italian mafia, 'Ndrangheta (his last unfinished article revolved around 'Ndrangheta matters in Slovakia that went under the radar of local authorities).

Under such conditions, By a Sharp Knife is not solely a story of one innocent victim and his family to be remembered, the film serves as a statement of social activism encapsulating not just a random act of violence but a metastasizing symptom.

However, instead of an investigative docu-drama or a provocative exposé, the filmmakers decided to adopt a point of view of a shocked and grief-stricken father searching for justice in a corrupted system amid a personal tragedy. Not solely for dramaturgical reasons, but also out of respect to the family, the filmmakers applied a creative license, such as changing the names while still preserving the general outlines of the case.

The protagonist loses the only son. Soon after the incident, the police apprehend the alleged perpetrators, a group of neo-Nazis. To the family's utmost surprise, they soon walk free. As the father descends deeper and deeper into the labyrinth of the dysfunctional justice system, indifference of authorities and eventually discovery of different powers in motion, the weight of revelations and his impotence to act against them start to take a toll on his marriage and his relation with his now only child, his young daughter.

In the beginning, By a Sharp Knife addresses a generational schism between the father and his son, the conflict of the father's expectations about what his son's future will be and the son's different plans. The misunderstanding of his son translates further into the narrative arch of the father's self-flagellation. His unconditional dedication to getting justice served and exonerate his son's name from shameful accusations remains fuelled by his deep sense of consuming self-blame.

By adopting the father's lens, the filmmakers tell a story of an ordinary unprivileged citizen while reenacting his tribulations against the injustice on a self-destructive quixotic mission. Despite thorny issues, By a Sharp Knife sees an ordinary man lost in overwhelming machinery beyond his comprehension. 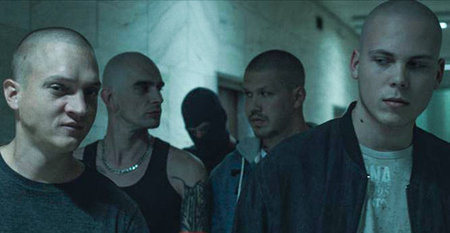 In one of the scenes which were based on the real experience of Daniel Tupý's father, the protagonist fails to get a lawyer who would be willing to take his case. In one of many moments of desperation, he asks how is it possible that nobody wants to defend the innocent victim while the perpetrators have a squad of high-ranking advocates on their side.

By a Sharp Knife blends intimate and legal (courtroom) drama, hitting obvious political notes, in a poetics borrowing heavily from Eastern European social realism dramas as a sort of territorial and aesthetics stamp of local arthouse production and conventions. The rising, talented cinematographer Denisa Buranová of the Crystal Bear-winning Little Harbor (read the review) lenses with regard to the social realism tendencies, however, her interior shots stand out, especially those set in institutions. The outdated brutalist labyrinthine corridors imply the struggle against an impersonal entity, the state's machinery of justice, in which the father gets lost, yet proceeds to charge onwards with a masochistic verve.

Teodor Kuhn's film By a Sharp Knife diverges from previous local political thrillers (domestic box-office hits), as they dabbled more on the genre side of filmmaking, notwithstanding the cases adapting infamous real-life incidents from political circles, such as the Kuhn's case. Besides the family tragedy and courtroom drama, By a Sharp Knife wields one more layer - social activism. The film is not solely a reminder of the tragedy but a testament to the larger stain that the pointless homicide left on a generation.

Do you feel this content is inappropriate or infringes upon your rights? Click here to report it, or see our DMCA policy.
By a Sharp KnifeCzech RepublicdramaSlovakia