Blu-ray Review: NIGHT ON EARTH, Jarmusch Travels Around The Globe In A Single Night 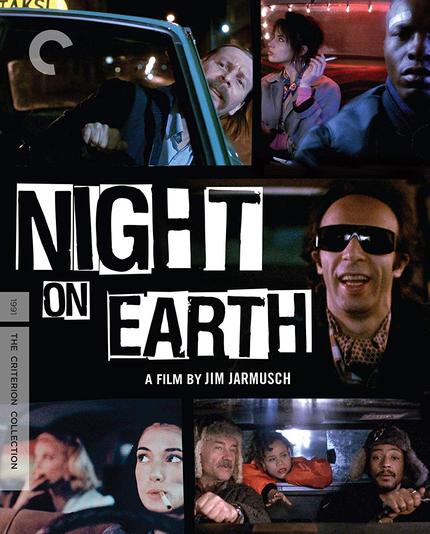 There is no director who more personifies American independent films in the '90s than Jim Jarmusch. Yes, he had been working since the early '80s parallel to the No Wave cinema scene in New York, but it was with films like 1986's black and white dark comedy Down By Law that he really started picking up momentum. By the time 1991's Night on Earth came around, Jarmusch was able to attract higher profile actors, and the resulting film is one of my favorites in his oeuvre.

Night on Earth is a five part film that explores a single night in various taxis around the world. Stories take place in Los Angeles, New York, Paris, Rome, and Helsinki each detailing a different wild night in a cab. The stories range from dryly humorous, to farcically hysterical, to downright depressing, but never are they boring.

Jarmusch begins with his biggest casting coup as we open with Winona Ryder picking up an aging film star played by American independent cinema legend Gena Rowlands. While Ryder is the biggest name in the film, having just come off of Beetlejuice and Heathers, it is Rowlands who steals the show. Jarmusch has made no secret of his love and admiration toward the work of John Cassavetes, and casting his wife in the role of Hollywood diva was a fitting tribute. Ryder plays the rough and tumble tomboy to Rowlands straight-laced gracious grand dame. It is perhaps the least memorable of the four stories, but still an interesting way to start.

From there we move to New York, where Giancarlo Esposito's (Do the Right Thing) YoYo is having one hell of a time catching a cab to get home to Brooklyn. This was decades before Brooklyn's gentrification made it a welcome place for hipsters, and when it was more okay for cabbies to be straight-up racist when deciding which fares to accept. Finally, he is picked up by a German immigrant played by Armin Mueller-Stahl, whose lack of language (and driving skills) turn this commute into a comedy of errors, commenting on not only racial prejudice in the states, but also how this kind of hatred is socialized into people, rather than being inborn.

Paris is the next stop on our global jaunt, as we join a cabbie played by Isaach De Bankolé who picks up a pair of rowdy gangsters before throwing them out and welcoming a blind woman portrayed by Beatrice Dalle. This is definitely the most sensual of the interactions in the film, in spite of it being largely antagonistic between the two. She looks down on him, though he is fascinated by her beauty and her aloofness toward him. Before too long she has had enough of his attempts to charm her and she asks to be dropped off before reaching her destination. He complies, and she takes off in another cab.

Next up is one of the funniest sequences in all of Jarmusch's films. We catch up with a taxi driver in Rome played by the inimitable Roberto Benigni who has picked up a priest on his way home. The only laught out loud funny segment in the film, Benigni really lets loose in this hysterical journey to hell and back with the priest. Taking advantage of what he sees as a rolling confessional booth, Benigni begins rattling off details of a life of utter debauchery to the priest, whose constitution can hardly take the strain. All the while, Benigni careens through the narrows streets and alleys of Rome as though he was getting batted around inside a pinball machine. It's absolutely, gobsmackingly funny, and definitely my favorite of the stories in the film.

Finally it's off to Helsinki, where a group of drunken men have hailed a taxi to get them home after a long night of drinking. As the tell their war stories in the back seat of the cab driven by Aki Kaurismäki regular Matti Pellonpää, he politely listens to their tales of woe, as they recount the story of the sleeping comrade who has been fired from his job and must now face a divorce and a pregnant daughter. After not seeming quite sympathetic enough to their plight, the passenger's ask the driver why he's not impressed, at which point he tells a tale of familial tragedy that would wrench tears from the blackest of hearts, leaving them in a puddle of shame and pity. As an ending to the film, it comes completely out of nowhere, but packs so much emotional heft into such a brief segment, that it's incredibly impressive and effective. Probably the best of the segments in the film.

Night on Earth marked the first of Jarmusch's many anthology films. He would go back to the form on numerous occasions, both overtly as in Coffee and Cigarettes, and thematically with films like Mystery Train and Broken Flowers. This film is still my favorite Jarmusch, and shows him at the height of his powers, just before he began to break through to the big time, but after he'd made an impression on international arthouse audiences.

Criterion's Blu-ray presentation of Night on Earth is visually and aurally pleasing. The restoration of the film is the same as the one they released on DVD back in 2007, and though the HD upgrade has the expected improvements in clarity and color depth, it's not exactly a revelation for fans who already owned the previous disc. In fact, this is another case in which Criterion's Blu-ray doesn't even attempt to build on their DVD edition, as the bonus material is identical in every way. There is a commentary with the director of photography and sound designer, a 45 minute audio Q&A with questions sent in to Criterion and answered by Jarmusch against a static screen, a six minute interview with Jarmusch from Belgian TV, and an booklet with essays reprinted from the previous edition.

Honestly, this Blu-ray upgrade is strictly for HD snobs and superfans. Those of you who already own Night on Earth in its previous DVD incarnation from Criterion and are perfectly happy with it can probably skip it. However, as a superfan of this period of Jarmusch's career, I'm happy to have this upgrade of Night on Earth.