REVIEW: Disneynature Penguins definitely makes for an ideal icebreaker in this charming documentary that waddles toward the heart 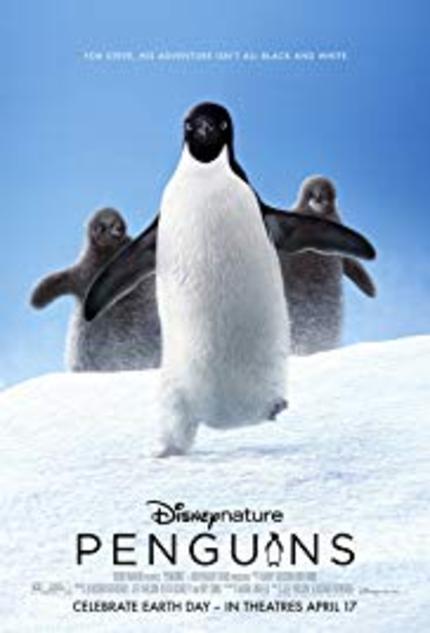 The endearing cool creatures being featured in Disneynature Penguins are as fascinating as they are adorable and impishly presented. Clearly, these breezy birds of the frigid land and sea are the latest heartbreakers showcased in a delightful documentary showcasing how resilient, playful, and skillful these flippered acquatic wonders they are in the spirit of their snowy surroundings.

Indeed, these particular charming black-and-white frozen fuzzballs are not to be confused as a Batman villain...that's for sure. After all, the only criminal thing about Disneynature Penguins is the cuteness factor and the sweetened adventures they endure in this appealing frostbite fable. In this case, the protagonist in Disney's latest nature-loving exposition is Steve, an Adelie penguin whose year-long exploits are captured by the vivid and colorful images of the camera.

Co-directors Alastair Fothergill and Jeff Wyatt Wilson, well-versed in making soothing Disney pictures capturing nature in all its sparkling glory and the showcasing of the crafty critters that wonderfully eat up the scenery, stick to the proven formula as they add mystery and vibrancy to the Antarctic landscape. Among Fothergill's notable ventures into nature's expansive den includes ditties such as Disneynature Earth, Disneynature Chimpanzee, Disneynature Bear, and Disneynature Monkey Kingdom...just to name a few. For the most part, audiences young and old should receive this wildlife wonderment as both tender and ticklish entertainment that waddles toward the heart.

Basically, the story centers around the mating season of the Adelie penguin breed. The human factor leading the charge in this cozy tale is Ed Helms doing the narration and providing an insightful voice for the heroic yet awkward Steve. So what is Steve's purpose at hand within the scheme of the pleasurable proceedings? Well, he must set out to find a mate for the welfare of his impressionable babies. Of course, time is of the essence as Steve must get his act together before the harsh Antarctic winter arrives. Thankfully, poor Steve--in all his forgiven clumsiness--does try to rise above the adversity and do what needs to be done in his role as penguin provider. Steve is finally blessed to be saddled with Adeline--the "homemaker" to Steve's bread-winner.

Affectionately, Disneynature Penguins works fabulously due to its educational content for the kiddies and its welcoming family-friendly whimsy. The cheeky tactics such as the movie making fun usage of vintage rock tunes from the likes of REO Speedwagon, Patti LaBelle, and Whitesnake as applied to Steve's survivalist endeavors on-screen is pure gold. Ultimately, Steve is the flawed but undeniably lovable scamp whose hapless antics helps elevate this treasured documentary beyond what could have been a saccharine-coated, G-rated farce.

So yes...birds of a feather certainly flock together in this nature-oriented gem. Thoroughly enjoyable and heart-warming, Disneynature Penguins has embracing animal magnetism for all the right kind of festive reasons.